HOW DO WE BECOME LOVABLE, AS IN, ABLE TO GIVE AND RECEIVE LOVE?

SOMETIMES, WE LEARN FROM CATS. OR A CAT, PARTICULARLY BELOVED.

IN MY CASE, THAT WAS BEANBLOSSOM.

The other morning, I was making breakfast.

I cracked two eggs for an omelette, into a small stainless steel bowl.

Beating them with a fork, hearing that distinctive musical rhythmic metal-on-metal clang,  I also heard myself calling, “Beanblossom! Bean-Bean-Bean-Bean-Bean!” 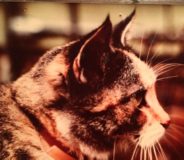 Now Beanblossom, my first cat, has been dead almost forty years. It’s not that I’ve forgotten this. But I habitually call the name of that small dear calico when I beat eggs in this way, as automatically as I sniff the vanilla or lemon or orange or anise extract when I unscrew the caps of the small brown bottles, another habitual gesture.

Whether it’s inhaling the vanilla or calling the name of a dead cat, in my view, you take pleasure and joy where you find it, and never miss an opportunity to do so.

Eventually, some of these opportunities become habits.

For Bean is, and isn’t, dead. Yes, she’s buried (in the back of my old house in Arkansas, under the mimosa tree; the daffodils Ned planted when he buried her presumably still blooming each spring).

But in memory as in dreams, where time and embodiment have little sway, Beanblossom is alive whenever I think of her. She is as quick and immediate as was her spry scamper to get to the egg bowl. Licking the little bit of raw egg left in it was one of her great delights.  Even as I would call her name, the clang of the fork in that stainless steel bowl would already have brought her running, however deep her sleep, from whatever part of the house she was hiding herself in.

One favorite haunt was the top of the armoire, from where she could look down on us, blinking in surprise, as if to say “Oh? Who are you again? And what are you doing here?” Another much-loved Beanblossom place, in winter, was wedged into the small space between the end of the wood-stove and the brick chimney into which it vented. If you touched her hot tricolored fur while she laid there, you wondered why she didn’t simply combust — and indeed, one December she did actually singe slightly, sizzling the edges of her whiskers so that they curled comically into great rococo curls.

I’ve called Beanblossom’s name when I beat eggs for years. It’s automatic. I guess that by doing so in the same way I did when she was alive, I call all this — the curled whiskers, the quick feet — up in memory. And there, quickly, I can revisit our adventures during the years we were both alive in the physical sense simultaneously, and in connection with each other — in whatever mysterious way a cat and a human being are in connection.

As I’ve said, Beanblossom was my first cat. She lived to be 18 … a period that paralleled, in my life, the years from age 18 to 36. No one else on the planet knew me so intimately in a daily way that long, that closely, over that period of time. Though life is one change after another (I wonder if there’s an age when we finally stop saying “When things settle down…”) , I think we can agree that for most of us, in young adulthood, the rapidity of change is stepped up.

Though I have had cats since Beanclossom’s death —  first another calico, and then two tabbies from the same litter, though I spent a great deal of time with my late mother’s elderly, sweeter-than-sweet tuxedo cat, Tumbleweed, and then trook in Nomah, the cat of a friend who died, for the last six month’s of Nomah-kitty’s life — there is no doubt that Beanblossom was the cat of my heart.

One night, alone (as far as human company goes), lonely in my bed in the little funky cabin Beanblossom and I shared, unsure about my future and frightened of its unknowns, I fell asleep with a backache, my last conscious thought, “Oh, I wish I had someone to rub my back.” This would have been, 1973, 1974, which means I would’ve been 21, 22. 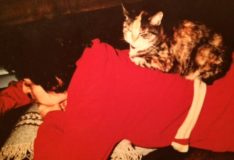 The next morning, I woke up on my stomach. And Beanblossom was walking up and down my back, kneading my spine with her four small paws, purring loudly.

Beanblossom used to hike with me; not on a leash, but following or leading, a few steps ahead or behind. She also went camping out with me, both when it was just the two of us and at times when I went with friends. On one latter occasion, several of us were skinny-dipping in an Ozark creek, and someone called out to me, “Crescent! Look at your cat!”

I looked up to the shore and there, standing on a rock, was Beanblossom.

You might not think that a cat’s face would be capable of expressing distinct feelings of distaste and resolve, but that’s what I saw on hers. She stood there a few seconds longer, looking towards me, gazing at the water, sizing things up, possibly screwing up her determination. Then it was: “Well, if I have to, I have to.”

And she jumped into the creek and cat-paddled to me.

Her dear resoluteness. The way she elongated her neck above the water.  Her head canted up and back, her nose tipped up, as if she couldn’t bear even the smell of the disgusting substance in which she found herself.

And yet, and still, she kept paddling to me.

When she reached me, of course I swam back to shore with her. When we got out, I tried not to laugh as I toweled her cat body, ridiculously tiny with its flat wet fur, especially silly because poking out of that rat-like wet body was her dry, normal-sized head, with the v of caramel-colored fur that slanted down to her nose.

For how could you laugh at a creature, so loyal and willing and brave and peculiar as that?

I remember these things; and that when I fell in love with Ned Shank, Beanblossom did too. Though a generally friendly cat, she took to him exceptionally. So much so that when Ned…

Well. Ned then worked for the Arkansas State Historic Preservation Office. He was hired to write a how-to book for use in the Quapaw Quarter district of Little Rock,  and he did. It was called Fixing Up Your Old House, and it was published, as he never failed to say, by the Arkansas prison system.

He threw himself a publication party for it. Everyone from his office was invited, including Wendy, a woman he had dated a few times before meeting me.

We were then living in a rental apartment in the Quapaw Quarter district of  Little Rock in a rental apartment. I can still picture that living room, the dining room next to it, that night: filled with gaiety, people, food, friendly noise, laughter, the requisite old beige uncomfortable given-away couch, with which young people just-out-of-college (as Ned was, and as I would have been had I gone to college) invariably furnish their first living rooms.

Now that I think of it, he later proposed to me on that same scratchy old couch.

Beanblossom gloated in all the activity, more or less making herself the center of attention: making the rounds: lap to lap, person to person, socializing and being petted by all.

All, that is, but Wendy, who arrived about an hour late.

And this is what happened: Wendy walked in. Beanblossom jumped down from whatever lap she was perched on, faced Wendy squarely, gave a single gigantic, dramatic hiss, and fled the room. There was a moment of awkward silence, and then the party went on.

Later that evening after everyone had left I came into the bedroom and there was Beanblossom curled up with Ned. He was stroking her between the ears and sweet-talking her, sotto voce.

“Noooo, Bean, it wasn’t like we were serious. Nooooo. You could have been a nice hospitable kitty, yes you could have been, yes yes yes, you could…”(This picture: the two of them nuzzling each other, on a winter day; taken by our friend George West, in Eureka Springs, Arkansas. When I look at this, what is so clear to me is the tenderness. Essential Beanblossom, essential Ned).

To think that all this story, it turned out, lay in the beating of some eggs this morning! I could have made and served omelets for a dozen people in the time it’s taken me to recount this.

All week, knowing I was long overdue for a post, I began planning one, noodling up tho the idea of writing about the slow journey towards becoming lovable. The post I was thinking about  thinking about had nothing to do, as I was conceiving it, with Beanblossom.

But I should have known that such a vast and audacious topic cannot be written abstractly. Only specifically, as, in my view you must, if you want to write well, about love or anything else.

The Native American writer N. Scott Momaday once said, “The events of one’s life take place, take place.” It is this second emphatic place, which in my understanding is not just geographical, but personal, sensual, historical, and spiritual, not just accurate and contextual, but above all truthful, which gives any writing vibrancy, authority, truth.

This is why nothing is wasted on the writer who is willing to let the world in, be porous to it, in all its love, wonder, betrayal, beauty, loss.

Life reveals itself in every purr, every clang of the fork against the metal bowl.

Then, everything becomes the specific material of the place Momaday describes. No waste, all utility. I

n rediscovering this mysterious process of what is called up from memories one didn’t even know one possessed, through writing, the writer discovers, sometimes gradually, the story that wanted to be told.

You can’t hurry love, as Diana Ross told us, any more than you can the true disclosure of place.

And for me, it turns out that becoming able to love insists on beginning with a calico cat who had a v of caramel fur that tipped to her nose. 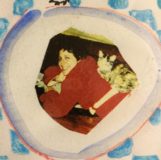