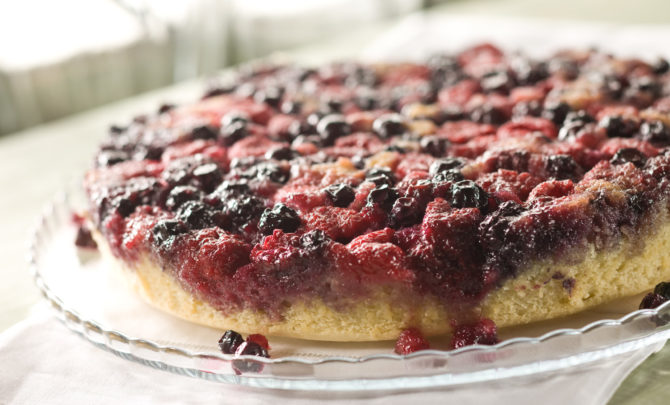 To those of us who love making dessert — who find baking from scratch as much or more fun than eating it — the upside-down cake is a high-scorer. If short on time needed for your typical layer cake (for instance, my Guinness Stout Chocolate Layer Cake is as good a chocolate layer cake as exists in this world or any other… but it is labor and clean-up intensive) the upside-down cake is your friend.

Now. One possible down side must be mentioned: to be either a dessert-lover or a baking-lover are categories which require the willingness to blank out the fact that sugar and things made with it are not very good for us physically. As someone who loves both sweets and baking but also endeavors most of the time to eat healthfully, this is a conundrum with which I live.

A tad more on that latter, but first: the cake.

ENTERTAINING WHEN YOU YOURSELF ARE A BIT UPSIDE-DOWN

I was recently reminded of the perfect ease of the upside-down cake on a weekend when, for reasons “too humorous to mention” as my late father used to say, we (my boyfriend/partner/dude, and I) found ourselves hosting a small dinner for two of my old out-of-town friends. We wanted private conversational time with the two of them  … but my old friends are well-liked, and other people wanted a chance to say hello. And of course, it would be mean to hog them to ourselves. So we decided that the dinner for the four of us would be followed by another dozen or so folks arriving for dessert, decaf and socializing.

It seemed, as they say, like a good idea at the time. But because it was a wildly busy weekend I had not done as much prep-cooking as I usually do when entertaining. So I was time-crunched, a state I dislike in the context of hospitality — for if the hostess is not relaxed, how can her guests be?

But enter, again, that minor miracle of topsy-turviness, the upside-down cake. This particular recipe, in fact.

Somehow, and without much stress, I put this together as our guests cleared the table from dinner and as Mark, my partner, did the dishes, and we all got ready for the larger group. This cake really is that easy.

There was a plus side, too, I hadn’t counted on. This little bit of fancy-stepping meant that the cake had just finished baking when the dessert-and-decaf wave of pals arrived,  thus the house was scented with the exquisitely welcoming smell of something buttery and vanillla-y; impossible not to breathe it in and say “Mmmmmm.”

And that, ladies and gentlemen, is part of the reason why:

1) it is indeed so easy put aside the fact that sugar and things made with a lot of it are not very good for us physically — because they are sometimes good for us in ways that transcend the physical. Well-made desserts taste so good. When baking, they smell divine. And they say, welcome. I care about you. I am pleased you are here! To upside-down that old phrase, they say, I knew you were coming so I baked a cake.  And…

2) I love upside-down cakes. A touch of drama in the reversing, but basically so easy; so good. As good as many desserts that are ten times the effort.

These small wonders of seeming disorder turned orderly start with a layer of fruit (in America, most often canned pineapple rings) in a sweet, syrupy, buttery glaze in the bottom of a heavy pan or skillet. Over this, a good simple yellow cake batter is poured.

After baking, in a culinary sleight of hand, the whole shebang is reversed out, while still warm, onto a serving plate, the fruit underneath now a gloriously attractive and gooey topping.

From seeming chaos and “uh-oh” to ta-da, in one clever flip: wow.

Most of us think of upside-down cakes as old-fashioned, but they aren’t. These recipes goes back only to the early 20th century. No one knows for sure how and when they originated originated, but a 1924 Seattle fund-raising cookbook seems to mark their first published appearance. This was followed by a version in a 1925 Gold Medal Flour ad, another in a 1931 government pamphlet, and finally one in a 1936 Sears Roebuck catalog. 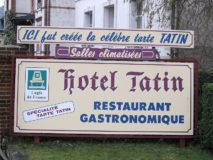 This pie was created in 1889 by two sisters, Stéphanie and Caroline Tatin, innkeeper/restaurateurs in the Loire Valley. During the busy hunting season, Stéphanie put a pan of apples and sugar over low heat, to cook slightly. But as so often happens in a busy kitchen, she grew distracted — —and she let the skillet of apples and sugar cook a tad longer than she’d intended. Instead of merely softening the apples, the sugar had melted and caramelized, and the apples braised in this caramel. With no time to think, (but clearly enough kitchen-smarts to know that you couldn’t go to wrong with apple slices braised in caramel syrup), Stéphanie cleverly popped a pastry crust on it, baked the whole thing, turned it out and served it.

Voila! The Tarte Tatin, now a French standard (cited by everyone from  Antonin Carême, who referred to it as gâteaux renversés to Julia Child) was born. It even has its own dedicated festival, was born. Though the Tatin sisters are long gone, the hotel where they invented the reversed apple gateau is still extent, and trading proudly on their tarte.

Whether happy accident or intentional invention, the cake that doesn’t know which side is up is perfect for when you want a dessert that is quick, seasonal (providing you use fresh in-season fruit), but also a little special. And this version — ultra-moist, rich —-  which I do at least once each spring/summer here with a mixture of fresh berries, may well be the best upside-down cake you’ve ever had.

Some serve it with ice cream or whipped cream, but this really isn’t needed. A glass of cold milk, however, is a welcome accompaniment. The cake is especially delicious when still slightly warm.