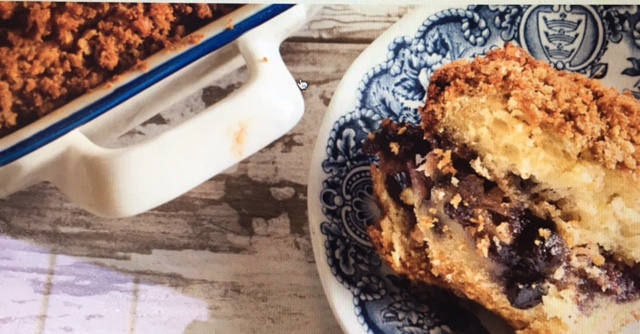 “I had a farm in Africa,” begins Meryl Streep, portraying Isak Dinesen, in the movie Out of Africa. 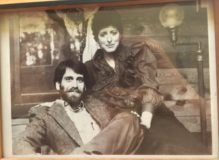 The inn, Dairy Hollow House, was home to the life I shared with my husband, the great love of the first part of my life, now deceased.

(Photograph: Ned & me, in the original Dairy Hollow House living room. I took a picture of the picture — which is framed, and under glass — to go with this post. I kind of like the fact that you can see the reflection of my arm, taking the picture — it goes with the idea of time overlaid by time, which is part of this story).

It was also home to a lot of astonishingly good food, much of which I cooked; to drama and jokes and adventures with guests, employees, and the community.

All stories which are still alive in memory, and sometimes conversation, written or spoken.

But the food is in a different category, as food from one’s past is. Every time I make something from those days, it is not alive just in memory, but in actuality.

Because isn’t that one the most amazing things about particular dishes — the way they make communion across time?

PAST AND PRESENT ON THE PLATE

And suddenly the past is transformed into the present.

When I make the Blueberry Coffee Cake I made countless times at the inn — when I make it here and now, in Vermont, where I live alone (though my chosen solitude is interrupted delightfully by long periodic visits from my New York boyfriend), my kitchen is suddenly suffused with the same intoxicating buttery-sweet scent, of cooking blueberries and caramelizing sugar and cinnamon, from my Arkansas years. A scent which one cannot breathe without saying, “Mmmmm.”

And at this point, residing as I do at this poignant juncture, I am (and I could not always have said this), happy. Happy here and now at this intersection, where past and present, memory and experience, cohabit. Where those I loved and those I love presently merge in that state of being called “loving.”

Where I feel lucky for all I had and have, rather than unlucky for all I lost, and all I might – no, will, because that is the nature of mortal life – lose.

This is a juncture I described in a way, in a poem for children, published some years ago in a 1996 anthology called Food Fight (illustration by Michael J. Rosen):

Grandmama made gingerbread –
her writing’s on this card –
her recipe in curled black script
directs, “Don’t beat too hard.” 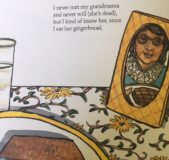 My mother ate it after school
cut in a warm brown square
when she was just a little girl,
and Grandmama was there.

Sugar, egg, and buttermilk,
molasses, ginger, flour –
mix and measure, put to bake
only half an hour.

I never met my grandmama
and never will (she’s dead),
but I kind of know her, since
I eat her gingerbread.

NOW, ABOUT THAT BLUEBERRY COFFEE CAKE

I recently wrote about the Blueberry Coffee Cake for Rouse Everyday, a magazine published primarily for customers of the New Orleans-based supermarket chain, Rouse’s Market. And yes, I wrote looking backward, towards Dairy Hollow House.

But I also wrote from and about the present: I quoted extensively from the astounding forthcoming novel written by my Vermont friend and Fearless Writing™ student, Mara Novak.

What was I doing, quoting from an unpublished novel, in an article about coffee cake?

Well, a coffee cake features prominently, and sensually, in a scene between Mara’s protagonist, Ellen, and Ellen’s best friend. It’s a scene that establishes character, and sorrow, and sympathy, and the art of listening, getting through hard times, and the first tentative steps to healing — all through a slice of fragrant, just-out-of-the-oven, coffee cake, and coffee.

And, because that Rouse Everyday issue was about coffee, and it is essentially a magazine more tipped to food than to culinary memoir, I also took the opportunity to riff about coffee cake in general: what it is, and why it is called “coffee” cake.

INSTEAD OF SUGAR: A NEW SWEETNESS THAT IS GOOD FOR YOU IN EVERY WAY

I also discussed, very obliquely, a question I have been grappling with, as does every person who loves to eat and cook, yet who wants to stick around long enough to enjoy many more meals — anyone, that is, who gets that there is an undeniable connection between vigorous good health and what we eat habitually. I wrote, in the Rouse story, “…(C)offee cake is definitely cake and, alas, there is no such thing, nutritionally and calorically speaking, as eating cake with impunity. Sometimes, however, I think there is a psychological immunity, as when Ginny serves her friend Ellen, in Mara’s still-untitled novel…”

So, as much connected to the past as my Blueberry Coffee Cake recipe is, I have updated it. I use Greek yogurt instead of sour cream, as you’ll see in the Rouse version.

But: here’s the big change, as I bake it at home: instead of sugar, I use, measure for measure, my new favorite alternative sweetener, granulated monk-fruit, aka luohan guo, aka Siraitia grosvenorii.

Why did I not mention monk-fruit in the Rouse article? Well, okay, monk-fruit is a little out there. It seemed to me it didn’t belong at Rouse Everyday; the idea of using monk-fruit instead of sugar is anything but every day. So, not for that venue, or that audience, not at that time.

But in my view monk-fruit belongs in this article, just as it belongs in my kitchen. It’s a game-changer for those of us who have longed to have our cake and eat it too.

It has zero calories and zero glycemic-raisers. And, it has none of the unpleasant aftertaste of stevia. It’s processed, not technically “natural”: what sucking sugar from a stalk of sugarcane is to granulated sugar, what munching a leaf of stevia is to eating the granulated kind, eating luohan guo fruit, is to packaged, granulated, bake-with-it, sweeten-your-tea-with-it monk-fruit sweetener. But it is not ‘artificial’ in the manner of cyclamates and other never-existed-until-they-cooked-it-up-it-in-the-lab artificial sweeteners.

Now: a word on “natural sweeteners,” like honey and beloved Vermont maple syrup: I adore them; the idea and the tastes of them. But the fact is that, other than contributing a few antioxidants, such sweeteners, yes, including agave and even coconut sugar, are all basically metabolized by the body exactly like good old, bad old, white sugar. Monk-fruit sweetener is hard to locate (hence I actually became a distributor and sell it here). And, it’s pricey.

But I don’t know that that’s a bad thing. Using expensive monk-fruit, rather than cheap but harmful sugar, means that instead of baking all the time, I am doing so less frequently, only on special occasions. Hence, it serves my overall purposes well: I want to be able to eat and prepare really good sweets once in awhile, but overall, eat fewer of them — because not only are they high in sugar (if conventionally prepared) but, usually, fat and calories too.

And I just can’t willfully overlook my certainty that these items, eaten on a daily basis, erode health. (If you are still on the fence about sugar, may I suggest you watch this video, Sugar: The Bitter Truth? If you listen to Robert H. Lustig, MD, an endocrinologist and a University of California at San Francisco professor of pediatrics, you will think twice before you answer in the affirmative when the waiter says “May I interest you in some dessert?”)

Personally, I think we should all do more to reduce our sugar intake. Eating too much sugar can seriously damage our oral health and can even lead to the onset of gum disease, tooth decay, and cavities. Furthermore, it might seem obvious, but trips to see a Dentist in West New York or a dentist wherever you might live are also vital if you want to live a healthy life. A dentist can not only complete an assessment of your oral health but can also identify any signs of wider health problems and therefore dental checkups can be hugely beneficial. 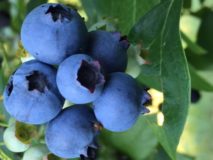 THE THRILL OF LIFE, BLUEBERRIES, AND COFFEE CAKE

Can you think of blueberries without having Chuck Berry reverb through your mind? I sure can’t.

I found my thrill … on Blueberry Hill.

I find myself thrilled, these days, surprisingly often, and not just by blueberries and hills.

It’s still blueberry season here in Vermont. Though I realize it may have passed for many of you, please keep this recipe. Use it and enjoy it as is, or substitute monk-fruit for the sugar (if you are like me, this will help you enjoy the finished coffee cake even more).

For, as long as we reside on this spinning globe, blueberry season will come again soon enough.

And like all seasons, let us celebrate it — let us bite into its temporary, impermanent, delicious glory. Let us be thrilled.