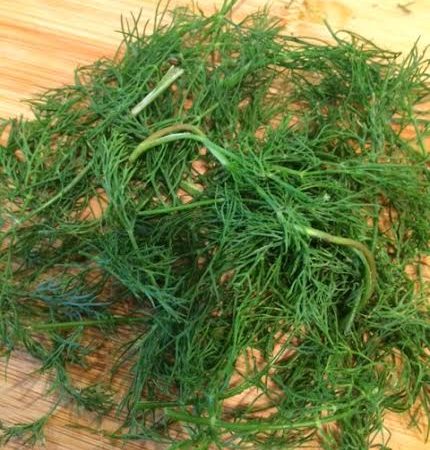 I’d had friends over last Friday, for dinner. A couple of the dishes I’d served them required a little fresh dill.

Now, you can’t buy a little dill. You buy it by the bunch. That bunch is usually, especially this time of year, preposterously large. This is problematical.

I live alone, except for when my boyfriend comes up from New York to spend a few days or weeks here.

And, while I like dill, it’s not at the top of my best-loved herb list (a position occupied by cilantro, basil, and mint).

However, when, according to my taste, a particular recipe needs dill, nothing else will do.

Which means that when I have dill on hand for a particular recipe, I inevitably have extra dill. Leftover dill. Many huge, elegant deep green feathery fronds of it.

What to do with this dill?

I’ve made pesto with dill, but it doesn’t quite work for my taste. I’ve seasoned potato salad with it, too: excellent. But potato salad really isn’t a one-person dish. Sometimes, I season soup with it, as my mother did (more on that later). I like it in omelettes, but that still leaves a whole lot.

Once upon a time, I pickled, canned, and preserved, quite a bit (even wrote a book on it, long out of print, called Putting Up Stuff for the Cold Time). Pickles often require dill, especially the eponymous “dill pickles.” But I’m not doing much pickling these days.

I also used to mix minced leftover dill into softened butter, along with garlic and other herbs, sometimes a little finely grated lemon rind. I’d roll this herbed butter into little balls, and freeze the little balls until I needed them (to add exuberance as they melted onto a pile of steamed vegetables, for instance).

Well, that was great when I ran an inn and fed 20 or 30 people a night. It was also great when I lived with and often cooked for my mother and her caregivers and a cast that came and went. It was also pretty great when I was living with my late husband, or the partner who eventually followed my husband, and, again, occasional guests.

But, a ziplock full of frozen herb-butter balls is just plain overkill for someone who lives alone. They’d be freezer-burned long before they got eaten.

Then there were the embellished biscuits I sometimes used to make at Dairy Hollow House  (that was the inn I once owned). Dill and cheddar cheese biscuits, with caramelized onion or raw scallion. Damn, they were good… but again, biscuits are not something I make for just myself. Even if I was willing to consume the calories and the white flour, they’d get stale before I could eat them all. (I’ve always been  mostly a whole-grain girl; these days I’m almost entirely so. Something like a biscuit I view as occasional food).

Drying this amount of dill? Please — dill does not dry well. It becomes tasteless, and loses its magical color:  little short fine eyelashes of dark gray-green is all you end up with.

So these days, often, the remainder of the too-big dill bunch sits in the fridge looking sadder each day until I give up and put it in the compost bucket.

This bothers me. I am so deeply not a waster of food. Throwing out good produce I’ve allowed to go bad makes me mad at myself, and (given our hungry and under-nourished world) guilty.

So. It was the Monday after my Friday night dinner party. The huge bunch of leftover dill was in my fridge, still sprightly.

Monday. I had a big pile-up of work to do, in part because I had played the previous weekend.

I didn’t have time to obsess about dill.

Still, that’s what I was doing.

I didn’t have time to prep cook.

A little dill vinaigrette, in the bottom of a jar, several salad’s-worths later

I did happen to have  some homemade vinaigrette in the fridge, half a pint or so. Pretty basic — extra virgin olive oil, red wine vinegar, sea salt, lots of fresh-cracked pepper, a little fresh garlic, a dab of mustard. Vinegar, as you probably know, keeps vinaigrette fresh for awhile. Which is handy when you want a quick salad.

I also had some toasted pumpkin seeds left over from my company dinner.

So, though I was too busy, I scooped the existing vinaigrette into the food processor with the handful of toasted pumpkin seeds. And I set to work on that dill, stripping its fine fronds from the thicker fibrous stems, piling it up on my cutting board.

And then. The scent of the dill rose into my nostrils, and from there snaked straight into memory.

You may or may not know the science, but I bet you’ve experienced it: how the sense of smell is directly wired to the parts of the brain which process memory and emotion. You breathe in something and you snap back to another time and place associated with it. The gingerbread baking is in your present-day oven — but suddenly you are six, and your Aunt Bettina is making you gingerbread, for which you are waiting eagerly, your bunny-slipperred feet on the yellow linoleum floor. (Perhaps  you still use her recipe. Knowing your own children, also gingerbread-lovers, will associate it, someday, with you.)

With my mother, it’s not a recipe as such. It’s dill.

Specifically, it’s my mother on Saturday mornings, when she was home from the office, making soup.

Dill was always part of her soups. Her chicken soup. Her split pea soup (which also featured  thin pink rounds of sliced hot dog). Even when she short-cutted and opened the cellophane tube of Manischevitz soup mix, with its layers of yellow split peas and lentils and barley, its tiny flags of dried carrot and celery and onion, even when she poured it into water,  brought it to a boil and set it to simmering, she added dill.

The dill-scented steam of whatever soup it was would rise from the kitchen and curl upstairs, traveling under my bedroom door. This, like the sound of the garbage trucks on Monday and the standard poodle, Cleopatra, barking wildly, marked the turn of the week. It meant my family. It meant time passing. It meant we — my mother, my father, and I — would sit down together for lunch. Dinner? That we shared most days, and often with my much-older brother.

Saturday, it was only the three of us, and the only time in the week when we all ate lunch together.

Tick-tock, the clock of our lives, our families. Bowls of soup, fragrances. The most transient moments turn out to be the most lasting.

And the clock of our our eras. Dill and parsley were the only two fresh herbs widely available back in the fifties. My mother used them both. She garnished almost everything with parsley, so ardently that one Mother’s Day I gave her a bouquet of roses and parsley (she was amused and pleased).

But she cooked, often, with dill. 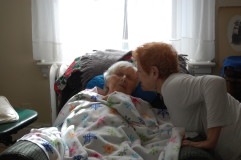 And now, here I am, many many decades after those Saturdays,  at least 20 years since my mother cooked at all, and three years after her death.

And yet she, and those days, are suddenly returned to me.

All through the chopping of dill.

I put the chopped dill, stripped from its stems, into the food processor. I buzzed it up with the vinaigrette and the pumpkin seeds. I scraped it from the processor back into the jar, wiping a finger through the remainder that clung to the sides of the processor bowl before I put it in the sink. Umm, it was good.

She would have loved this dressing, I thought.

I thought this again that night, when I dribbled it over some good local romaine, torn into pieces and tossed with scallions, and chunks of height-of-summer tomatoes, and oil-cured olives, and feta. A few sliced of cooked garden beet at the bottom of the salad. The dill and pumpkin seeds — they’d just perked the vinaigrette up so much.

Is she with me, my mother?

No, she is gone from this world. I cannot call her. I cannot serve her this impromptu semi-Greek salad (the last few years, she wouldn’t have been able to eat it, anyway; eating solids or anything that required chewing was a thing of the past for her. I’d wept, the afternoon I learned she would have to eat only purees from then on).

Is she with me? Yes, absolutely. She is with me as a young wife/ mother / career woman / writer. A tense, often anxious, person, driven and talented, yet capable of making soup every Saturday afternoon. She is also with me as an old, old woman, at last relaxed, loving and lovable.

At that point, we became the great delight of each others’ lives. A transition that all mothers and daughters who have difficult relationships do not get to make.  We were lucky. We knew it.

Is she with me? Yes, of course, just as surely as she is not. Today, though, she is — through dill, tasted and inhaled. Just a breath away.