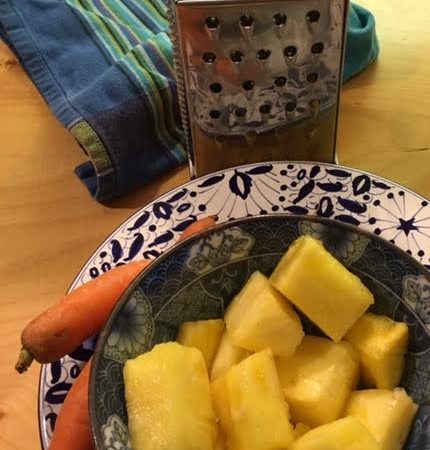 “Should I just throw these out?” I asked him.

I was referring to 15 or 20 leftover muffins: carrot-pineapple-coconut muffins. We were doing that lovely post-party couple-dance of cleaning up, putting the house back to rights, discussing the event we had just co-created.

He wrinkled his brow.  The give-me-more-information look. He was drying the glasses, replacing them on the shelf. “”I mean, muffins don’t keep  well, ” I said, by way of answering, “and we don’t eat all that many sweets. And you’re heading back to New York in three days. So…?”

He grimaced. Meaning, really? Throw them out?  Meaning, they are too good to throw out. Meaning, I hate waste. Meaning, isn’t there something you could do with them?

“Well, ” I said hesitantly. “I suppose I could crumble them up and freeze them and use them to make a bread pudding.”

He gave me an enthusiastic smile, a vigorous nod  seconded by a quick approving lift of his eyebrows.

So that’s what I did.

Now. Something must be said about this party from which these muffins were left, from which he and I were cleaning up.

It was a  post-election open-house brunch, held the Sunday after the Tuesday. This was a party I had oh-so-glibly planned a couple of weeks before the actual election. I wrote about it in a flippant (almost, it seems to me now, criminally so) article which appeared in Food52, an online culinary magazine. That was back when I thought then that the worst we had to get through was that bruising campaign; I had thought, “But then we’ll have Hillary, and things can calm down, and…”

Well, you know what happened next. But back in those retrospectively halcyon days when I got the idea for the party, I thought all we had to was get through that anxious-making campaign and we’d be able to go “Phew.” But back before I knew how terribly wrong I was,  I calmed myself, as I wrote in the Food52 piece, with “the timeless kitchen choreography… the percussive chopping, the stand-mixer moving from thwack to whir while beating butter and sugar ‘until light and fluffy.’ … the series of familiar actions: planning, lists, prep, phone calls, emails, making a playlist…”

The get-together did go on (though on the Wednesday following the election I didn’t see how it could).  Surprisingly, or maybe not, it went very very well.  Everyone was so relieved to be with each other, comforted, able to have a place to talk and process (needless to say, this was Vermont – we were all on the same side, all in shock, grief, disbelief).

Of course, the gathering’s character changed. As my friend Gail said, thanking me and hugging me repeatedly before she left, “Before it would have been a celebration; fun, but… But now! Now it’s  a necessity.” She repeated the “necessity” three times.

And it just was so good to be together.

But this post is not about the party, or even the election. It’s about White Chocolate-Pineapple Bread Pudding with Dark Rum Sauce, Donald Trump, and culinary literacy.

It’s about Donald Trump because one of the menu items (remember, it was all about the theme) for the get-together was “Make America Grate Again” Pineapple-Carrot Muffins. Of which there were, as I mentioned, 15 or so left over. Not because they weren’t good, but because they just didn’t go as well with the Bad Hombre “Taco Truck” Chili as the No-Use-Crying-Over-Spilled-Buttermilk Skillet-Sizzled Cornbread did.

It was these muffins my Alpha Dude felt I should not throw out, which led to their reincarnation as what may be one of the best bread puddings I have ever made.

Which, in turn, leads to culinary literacy.

I had to “invent” a recipe in order to use up those muffins. Why was I able to do so with confidence?  Because I have made many other bread puddings; because I understand the food chemistry (the protein in the eggs in the custard that gets poured over the bread, in this case the muffins, coagulates and toughens slightly, in this case binding and thickening the pudding).  And I have, as well, a good sense of what flavors play off each other best. I don’t have to overthink this much; I kind of know what is likely to work. This is a language that all good experienced cooks — home cooks as well as chefs — are fluent in, to some degree.

In my role as as a cookbook author, I write very, very detailed, instructional recipes — I do not assume those who read my books have this degree of culinary literacy. For this reason, “Could you share the recipe, please?” is not a request I take lightly. It is expensive (ingredient costs) and insanely time-consuming (I often make the same thing three or four times, and I edit for clarity over and over, ruthlessly) . To write a truly functional recipe, which anyone, regardless of their level of experience, could follow and have the gold standard goal of all recipes: reproducible results: this is not a quick, easy undertaking.

But what about when something turns out so good you simply feel it would be a sin to keep it to yourself? Such was the case with this bread pudding; and such is the reason for this blog’s sub-category, #dinnerwithdragonwagon. I don’t do all-out recipes here; rather, I talk through what I did and, in a loosey-goosey way, how. And those of you who are culinarily literate will be able to figure out a damn good approximation, should you be so inclined.

So here is what I did.

I pulled my leftover coarsely crumbled “Make America Grate Again” Pineapple-Carrot Muffins from the freezer and scattered a large, well-oiled baking dish with them. I then scattered a can of drained crushed pineapple over them. (See, if I was writing a real recipe I would now have to get up, find the empty can of pineapple, tell you how many ounces it was, and give directions for draining the pineapple and what to do with the juice).

I remembered I had some white chocolate, which I hadn’t used in donkey’s years. After finding it, I nibbled a bit to make sure it was still good. It was.

Then I pulled my own Passionate Vegetarian and turned to page 1059 (yeah, big honkin’ book) and found the recipe for Chocolate Bread Pudding Maurice. I made the basic custard, melting the chopped white chocolate (I paid no attention to keeping the amounts of white chocolate commensurate with the white I had equal; I just used what I had). I used less sugar, first because the muffins were already sweetened, and second because the white chocolate was, too; the Maurice version has quite a bit of unsweetened).

I followed the Chocolate Bread Pudding Maurice method: soaking the bread crumbs in the hot custard for an hour before baking; baking in a bain marie (another thing I would have to explain were I writing a real recipe here). 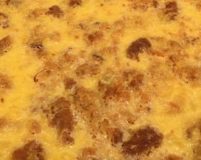 The bread pudding: baked, but without its pineapple glaze or rum sauce. I told you it wasn’t terribly photogenic.

The pudding came out of the oven perfectly, albeit not terribly photogenic (bread puddings, like cooked hot cereal, just aren’t that pretty, though I can, when in food stylist mode, gussy up an individual serving of it or almost anything — plate it up carefully and garnish it to a fare-thee-well; it can look mighty respectable… but still).

I then scattered some fresh pineapple chunks over the top, then heated and thickened some good unsweetened natural-foods store pineapple coconut juice with a little cornstarch, and poured this sauce over the top.

I then, being in a lily-gilding kind of mood, made the incredibly rich, indulgent Bourbon Sauce on page 336 of my own Cornbread Gospels. Except: instead of heavy cream, I used full-fat unsweetened coconut milk. And instead of bourbon, I used Myers Dark Rum.

I brought it to this second event: an impromptu community early Thanksgiving potluck, held at the church that serves as our tiny town’s gathering place. There it was: the pan of pudding, a quart jar of the rum sauce beside it. As I say, it was not the prettiest thing, and it looked a bit out of place next to the much more attractive traditional pumpkin and apple pies. But I had labeled it (leaving aside mention of the carrots, because I figured that they would have just melted into the pudding and would not be recognizable; a correct assumption).

After a few people sampled it, word got out.

I had the smug secret satisfaction of overhearing people who either did not know me, or did not know I had brought it. “Hey, what’s that?”  “It’s a pineapple-coconut kind of bread pudding thing. It’s really good.”

And then, “Have you tried the pineapple-coconut bread pudding? You don’t want miss that.”

A few figured it out. “Did you make that, Crescent? Oh my god… I am swooning. And that rum sauce! I want the recipe!” (I demurred, for reasons I have already explained, on promising the recipe.)

I watched people go back for seconds and thirds. This was satisfying and happy-making. I was glad I had kept the muffins.

I thought about reinvention and reincarnation. Those muffins I had been about to throw out had inspired me to go in a whole different direction than I normally would’ve. In this context, despite my horror at the president-elect’s cabinet appointments that were by then coming down the pike, each seeming to me more disastrous than the last, I found myself thinking, “Well… maybe there is hope for our country after all. Maybe it just looks like they threw democracy out. Maybe they just sort of crumbled it and put it in the freezer. Maybe, in the final analysis, we can make something good out of this.”

Now. All this being so, I am not without regrets.

I regret that my boyfriend, back in New York at the time I made it, did not get to taste this exquisiteness which he was, after all, part of.

I regret that those of you who are not culinarily literate probably cannot figure out from this loose description how to make it. Because, if you like sweets, especially custard-y ones, it seems a shame that you can’t have it.  Because, as totally indulgent sweets go, it was so good that, as someone I used to know was fond of remarking, “I want to have its children.”

(But those of you who are culinarily literate will get the idea, and probably some of you will go “Oh yeah!” and possibly transmute the idea into other wonderful iterations.)

And I also feel a fainter but still identifiable regret that, succulent and perfect as it was,  I will probably never make it again.

What are the odds that I will ever again have 15-some “Make America Grate Again” Pineapple-Carrot Muffins sitting around waiting to be reincarnated?