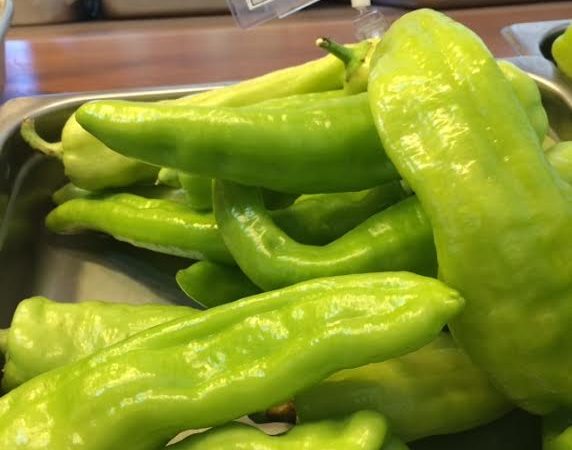 High noon, on the year’s clock. That’s what it is right now.

I know technically, literally, that summer’s high noon would be the Solstice, towards June’s end. But subjectively, I place it about a month later. That’s when the overflowing, abundant generosity of my local farm-stand makes me swoon with possibilities, and it’s hard not to overbuy. All that produce! All those full, full baskets! 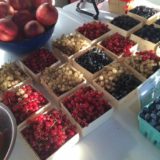 The sun making tiny ornaments of every bright red currant, lanterns of the Jersey peaches.

The blue-black gloss of eggplants, reflective, plump and curvaceous.

The bunches of basil and dill, the newly cured garlic.

The beets, bundled into rubber-banded bouquets,  their proud red-veined leaves bold and full of themselves.

I had company coming this week.

I love dinner parties,which I consider the highest form of entertainment and hospitality, and the staging ground for the deep pleasure of conversation. Real conversation: meaningful, flowing, focused conversation among people enough alike to have commonality, yet different enough to spark new ideas.

The twin challenges, as a hostess, are figuring out guests who will intrigue each other, make each other sparkle, who can both tell and listen to stories… and figuring out what to feed them.  That latter is easier, as are decorative questions (which plates, which napkins? which flowers in the bouquet?).

Originally I thought I might pull off the impossible: it looked like my boyfriend (from New York), a friend /colleague I knew well and loved to have at dinner parties because he is such a charming conversationalist (from Boston), a writing compadre who I hadn’t yet met but knew I would adore (from Missoula, Montana), her boyfriend (from Seattle) and a Southern friend/mentor/colleague (from Alabama). I’d throw in a couple of locals literary pals and we’d rock’n’roll. A dream grouping!

Eventually I gave up trying to push the river and accepted that though I would see all these dear and interesting people, it would not be on the same night. I would celebrate and feed them, make bouquets out of whatever was blooming, both in the wild and in my garden. 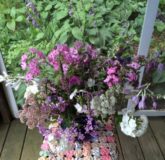 But I would do so separately, in whatever configurations worked out.

So this Friday it was only going to be three of us.

Still, it was hard not to go a little nuts at Walker Farm.

I wasn’t sure exactly what time Prageeta and Mike would be arriving, and it was a busy week. I wanted to do as much advance prep as possible before Friday.

And it might well be very hot and humid (uncharacteristically for Vermont, we’d been having this weather for a number of days). So I wanted every dish to be just fine served at room temperature.

And so it all turned out to be. And made even better with the good olives, the cheese, the excellent Macon-Village white wine and Pinot Noir Prageeta & Mike brought.

Here is what we had, and when I made it, for our Friday dinner:

Chilled Cucumber-Yogurt Soup with Mint & Green Grapes
(my summer staple, and always in the fridge anyway) 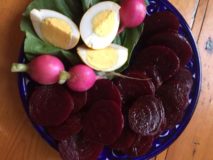 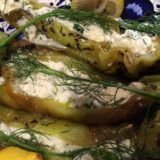 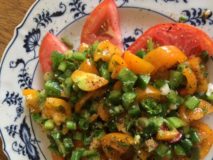 Melissa’s Spinach Pudding, Served Warm
(from Passionate Vegetarian… except, instead of spinach, I used beet greens, lamb’s quarters, & oak-leaf kale, instead of flour I used bread crumbs, and I seasoned it with garlic and nutmeg)
(prepared on Wednesday, baked on Friday)

It could be argued that this was too much food, too many dishes, for just three people.

But not if you love to cook and it’s the high noon of summer.

And not if you suspect you are really going to enjoy sitting down with these particular friends you haven’t met face to face yet, for what you think and hope will be light-of- heart yet substantive, interesting, cross-fertilizing conversation.

My two guests arrived at 7:00. We sat down at 8:00, on the screen porch, a blue-glass jug of flowers beside us on a side table (the table itself was too full of food for their to be room). As we talked we watched  the golden daylilies and purple hostas blooming, the deep green of the dawn and the near maples, the farther green and blue and gray mountains fading into the distance,and then all of it fading into dusk.

I lit the candles, in the heavy brass candlesticks, passed down from my Grandma Ella to my mother to me. I lit the citronella incense, in the brass incense vase and plate I brought from India so many years ago.

We talked. We listened. And we ate. Had seconds, in some cases thirds.

Other than getting up to clear the main course and whip the cream for dessert, we stayed at the table, glorying in that perfect confluence: the night as it settled in, the setting, food, season, conversation, each other.

And the next morning, we had the leftover Summer Pudding for breakfast. And I sent them off happy, and all three of us were just as full of new ideas and plans and what-ifs as we were with good food. 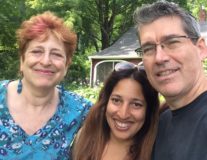