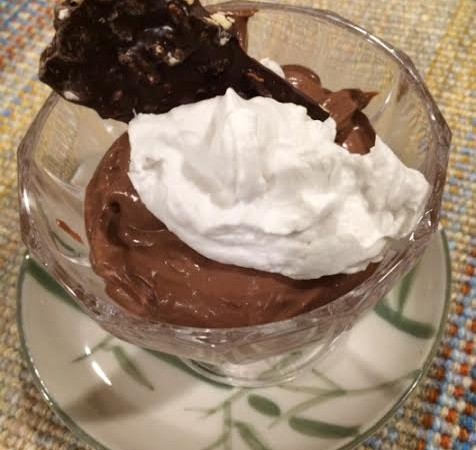 “Um, Bill, so it turns out I have to be in Nashville this winter, for a month or so,” I said to my old friend, who lives alone (contentedly), in a small house in that city. “I was wondering, could I possibly stay with you?”

“You know I love you… ” said Bill. He, and I, let the words hang. We have been friends long enough to be literate  in each other’s tonal nuance.

I started over. “This isn’t beginning well, is it?” I asked him. “What I mean is, could I stay with you for a week or two?”

I did not take any of this amiss. Bill and I adore each other and have been pals, though never romantic ones, for over 40 years, to our mutual shock. We know 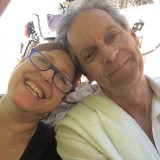 things about each other that no one else on earth knows.

He sang at my wedding. He spoke at my husband’s funeral. He still makes the marinara sauce I wrote out for him in a hand-made, illustrated cookbook I created towards the start of our friendship. I have seen two hours of home movies which cover his life from his infancy to his early teens (he was an only child). We lived together in a small apartment for a week, the September before last, in Nice, France (left, pictured on the beach; Bill spends part of each year in France and had invited me annually for well over a decade).

But A), he’s an introvert, who has never married, and has ways, small rituals, which give him much satisfaction, and are pretty well jelled and B) “Let me think about it,” is what he says in response to anything outside of his normal patterns (which admittedly would not be normal to many people).

He said, “I’m just wary of mission creep, Dragonwagon. I think more than that and I think I might get resentful. I’m not saying I would, but I don’t want to risk it.”

I knew I would be making quite a bit of Mexican food.

And so I came and stayed ten days.

Late one afternoon, on one of the two days a week Bill goes to work at his day-job (he is a musician by trade), he called me, and asked me to put a can of his current 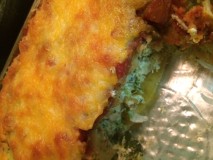 favorite beer, locally made at East Nashville’s Fat Bottom Brewery, next to the glass  already in the freezer, so it would be cold by the time he arrived. I did.

The enchiladas were already in the oven.

Later,  tipping his cold beer into his cold glass, inhaling the scent of the stuffed corn tortillas baking in red sauce, the simmering beans, he remarked, thoughtfully and with sincerity, “You know, I can get why people like this.”

“This” meaning the give-and-take of sharing a home with someone. Normal to many, somewhat exotic to my friend.

Hosts and guests have changed since the days when I used to get a frisson of dread at a line in Jefferson Airplane’s “Somebody to Love.” This line seemed to me to define an excruciatingly polite loneliness: And your friends, baby… they treat you like a guest.

That was 1967. I was fifteen. The America in which I’d grown up still had a middle-

class, which aspired upwards. And in that middle class, guests, whether for a dinner party or an overnight, were supposed to be “entertained” with a certain formality.

My earliest years had included the tail-end of these formalities: white gloves for quite a few occasions, “bread-and-butter presents” or “hostess gifts” when you visited. If you were host to visiting overnight guests, you arranged things for them to do: trips to the museum, luncheons. When “company” came to dinner, rich, fancy, fussy food, mostly French, and great hubbub was the order of the day, with frantic cleaning beforehand, and silver-polishing, and linen-pressing. “The dishes” (dirty ones) hid in the kitchen until after the party, or were washed by the maid, who probably served as well, while the dinner party itself sailed on, hopefully serenely, in the dining room.

Thus, at fifteen being “treated like a guest” by your friends seemed to me damning: a subtle, formal distancing, a chill worse than outright excommunication. Which was, after all, still communication of a sort.

But 1967 was the beginning of a great shift in formality.

By the time I was 25, there were only a few restaurants left where you couldn’t get in wearing jeans (though in some cases they had to be “nice” jeans).  Dinner parties were becoming pot-luck as often as not. If you invited someone over, they’d say , “What can I bring?”  When they arrived, they’d show up in the kitchen and say “What can I do?” or roll up their sleeves and start washing the dishes.

These days many homes do not even have what realtors still refer to  as “a formal dining room.”

Not that people (including me) didn’t and don’t occasionally give more formal and elegant dinner parties. They, and I, always have and probably always will, and these occasions do have their own enjoyability. But it’s still so different from what it was in the days when the line from “Somebody to Love” gave me the all-overs. 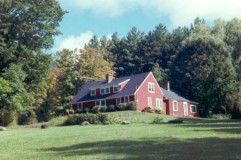 humorous to mention,” found myself, this winter, away from home and being a guest much of the time. Some of this has been in Little Rock, Arkansas and some of it, as I’ve mentioned, in Nashville, Tennessee.

(In summers, back in my home — once my late aunt’s home — in Vermont (left), I have been and still am many times on the host side.)

As an older person mostly staying with very likable people about my age, whom I’ve mostly known for awhile, the guest-host pact mostly works easily (I have been so fortunate in this, this winter).

Friendship, rather than host-guest protocol, prevails. Neither party expects to entertain or be entertained. Everyone goes about their business, unobligated, considerate, checking in with each other, occasionally doing things together but also not. Work, within or outside the home, continues. Visitors observe and respect “house rules,” including some that are not explicitly stated. Privacy is respected. No one imposes; no one withholds; everyone is happy, sometimes very happy, with the degree and quality of interaction they have. It’s not so much “having” company as “keeping” company, in a low-key way. Every so often, interesting and deep conversation just happens, often over shared meals. And so it has been this winter.

During it, I stayed first with my longtime Little Rock friends, George and Starr. Since Starr recently retired, she has grown more interested in cooking, and frequently hung out in the kitchen with me, watching, asking questions and offering to assist. (Left, she helped me prepare a gluten-free pound cake for a recipe I was testing, cheerfully grating lemon after lemon.)

Then it was on to Nashville.

First I was with Bill, then with his friends who also have become mine, Hugh and Mary (their home is larger, and they are much more accustomed to having people around than Bill is, and they actively like it … are accustomed to, having guests stay awhile, even as long as a month or two).

What I often do when I stay with people is cook for them, if that is something they are willing to let me do. Most, I have to say, are thrilled. (“Who wouldn’t be?” Bill once pointed out. Awww, Bill.)

Starr stays away from most grains except quinoa, loves roasted vegetables and has

recently become enamored of the ingredients from an extensive nearby Indian market.

I made her and George omelettes and soups and salads and dishes like a sweet-hot stir-fry of vegetables with sweet potatoes, chickpeas, cubes of paneer, and cilantro (pictured right), over quinoa.

Billy was easy: anything delighted him, and he was so happy to be cooked for.

Though Mexican food is his perennial favorite (but he’s also a Francophile… left, my own for-Bill-only fusion of the two, a masa crepe filled with a saute of cumin-scented mushrooms and onions, with a bit of cream and a lot of salsa verde). But he is also fond of potatoes, and nudged me towards using up some very green Yukon Golds he’d had for weeks, to make potato soup. Now green potatoes are poisonous; I peeled those suckers down till they were pure golden-white and maybe ping-pong ball sized; but the soup made from them was really good anyway.

Hugh and Mary are (present tense because I am still staying with them) also very easy, and much fun to cook for, both being good cooks themselves. For them I’ve made… but wait, that’s another post.

I left Bill’s home after ten days, on a Wednesday, and then headed to Alabama (the reasons why are another story), where I stayed in a motel for a week. That Saturday, my cell phone rang in the evening, at about 11:30 pm.

“Dragonwagon!” said Bill, in a tone of complete astonishment, against a noisy background. “I miss you!”

“Yeah, but I’m between sets,” he said. Impatiently: he wanted to get to the point, and he wanted me to get the point. “But Dragonwagon – I miss you!”

Except, I know a compliment when I hear one. And, I also know love when I hear – and feel – it.

Dinner with Dragonwagon: random meals from a life 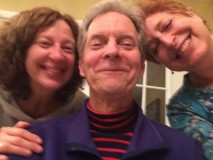