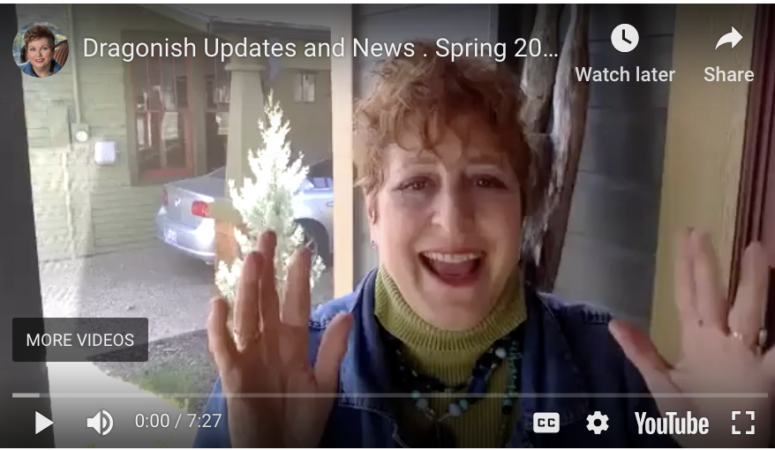 As promised: here are the details on some upcoming assorted dragonish goings-on: some writing-related, some culinary, some (implicitly) about high-energy rule-breaking aging… join me!

April 6, 2019: FASHION SHOW, BENTONVILLE, ARKANSAS
In keeping with my general practice of doing things that scare me on a regular basis (it jiggles up the mojo) I will make my first appearance on the runway, at Northwest Arkansas Fashion Week, wearing clothing by designer Rosie Rose, an insanely gifted second-generation artist and designer (I knew and loved her late parents). She creates wearable art and, as her bio says, “uses models with a diverse range of sizes and body types as well as trans models and drag queens in her runway shows.”

Here I am, practicing Attitude, with a capital A. Photo by Sweetie Berry

Believe me, a blog post on this — on trying to get the proper strut down, to transform anxiety (too old! too fat! I don’t do this kind of thing!) into physical confidence and implied sexuality in a room full of lithe teenagers, AND why I believe doing things outside of one’s comfort zone or areas of expertise is important— is coming.

At any rate, stuff will be strutted. At least, aspirationally.

And now to an area in which I am more comfortable…

High atop the Boston Mountains (the region’s peakiest) rests Ozark Folkways, a serene educational and artistic retreat center where contemporary and traditional skills are taught and culture preserved. There, I’ll be leading a three-hour writing workshop called  Dialogue (and the Art of Skipping the Boring Parts). Dialogue — speech as spoken naturally between characters, in well-written form — makes narrative leap off the page. Done well, it’s lively, fun to read, engages readers, reveals characters and relationships between characters, all while moving plot forward smoothly and inevitably.

If you want to write dialogue well, join this class, where you’ll learn to listen to speech effectively, and discover when, how, and where to write it so unstilted and real it comes off the page, yet still moves action and serves your story. Whether you’re experienced or a novice, hone and brighten your skills in writing revelatory, engaging, energized talk on the page. 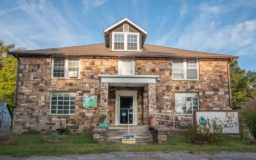 It was my privilege to write the foreword to Jared Phillip’s new book Hipbillies: Deep Revolution in the Arkansas Ozarks, published by the University of Arkansas Press. A beautifully researched scholarly study of the back-to-the-land / countercultural ventures that flourished in the hollers and redoubts of the Ozarks,  Jared  collected oral histories and combed archival resources, patchworking the history and influence of we alternative types who came from elsewhere in the 60’s and 70’s to make the Ozarks our own, and to be remade in turn by the place and the people. Were we in “deep revolution” ? I don’t know, but I do know that he nails beautifully the relationship between newcomers and the older natives, and that suspicion turned to respect through hard work.

That’s a lot of what I wrote about in the foreword: the hard work. In particular I told the story of me and a pig named Elvira, and being tasked with building a pig creep (shed) for her…

Another at Ozark Folkways: this is the second of three Craft of Writing™ workshops I’ll lead there. (Each can be taken as a stand-alone, but they do all complement each other nicely). In this three-hour class, The Truth about “Show, Don’t Tell” , we’ll explore advice almost every writer has heard: “Show, don’t tell.” What does this actually mean? And is it actually sound? If “showing” is so good, why is it so difficult? If “telling” is so bad, why do so many of us do it?

Get clear once and for all on the difference between a show and a tell. Learn to stop telling — even in exposition and transitions, two common places where writers of both novels and memoir bog down. When you understand how to show your unique material, the voice that emerges belongs only to you. 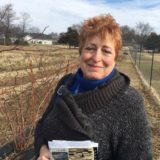 Sweetie Berry caught me wandering the winter bramble bushes at Apple Seeds, in February, dreaming about how beautiful the site would be come spring, and what I’d serve…

I’ll be cheffing a dinner benefitting Apple Seeds, a non-profit 2-acre teaching farm in Fayetteville, Arkansas, which not only educates local schoolchildren and teenagers about where what they eat comes from, but actually teaches them how to grow and cook it.  It is “farm-to-table” lived and experienced: a hands-in-the-dirt, soil-to-harvest-to- kitchen-to-table-to-mouth experience.

I’ll be serving a five or six course meal, of the kind of food some of you will remember from Dairy Hollow House, and telling a story with each course. And my old friend, the musician Bill Haymes,  is getting things rolling with a short musical opening.

Highly limited seating; just 35 tickets available. $125, which includes one of my books. Reservations are available here. 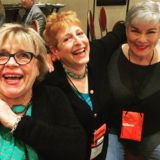 Having a big ol’ time at IACP 2017 (in Louisville, Kentucky) with Pan Pals Nicole Aloni and Denise Vivaldo.

I’ll be teaching a three-hour Fearless Writing™ in Santa Fe, New Mexico, as one of the “global food visionaries” presenting at the 41st Annual Conference of the International Association of Culinary Professionals (IACP).

You must be an IACP member to attend, but that is far from a bad thing… I have been a member of this group for almost 30 years now, and I have gotten so much from it.

If you work with food, from growing it, to writing about it, to cooking it professionally, I can’t recommend it highly enough. The bonding with Pan Pals is incomparable, as these pictures show.

One variation of memoir: autobiographically based fiction, like this early novel of mine (it was a New York Times Notable the year it was published).

Another at Ozark Folkways: this is the third of three Craft of Writing™ workshops I’ll lead there. (Each can be taken as a stand-alone, but they do all complement each other nicely). In this three-hour class, we’ll explore look at how to go From Life to Memoir, Own Your Material.

A memoir is autobiographical, but it’s not autobiography or even your life story. It’s both smaller and larger: smaller because it’s not the narrative of your whole life, but of part of it; larger, because even though it’s you, it isn’t you.

In memoir, well-told related incidents, anecdotes, situations illustrate the protagonist (you) and how she or he undergoes significant inner and outer change. And if you tell your story vividly and truthfully enough, your memoir becomes transparent. If you achieve this, readers will be see themselves through your story.

We’ll explore memoir you are uniquely qualified to write, what its thematic threads might be. We’ll look at basic memoir structures, ways in which you can pick and choose life-events which support that thread, and liability concerns — people you may mention in a less-than-favorable light.

You’ll get close to your material, and your life: you’ll write it, not write around it, including the tough stuff.

After taking June and July off for focused writing and a possible trip to Scotland, I’ll be back in Fayetteville, Arkansas in late August, returning to the Roots Festival, for the second time.

Bill and I, after the first staged reading of Until Just Moistened. At The Preacher’s Son, Bentonville, Arkansas. Photo by Madison Geddie.

Roots is a rockin’ yet intimate, high-energy yet laid-back, urban yet down-home celebration of music and culinary culture; it embodies every contradiction that makes the Ozarks the present-day cornucopia of vibrance it is.

This time I’ll be performing my own Until Just Moistened: A Not-Quite One-Woman Show, with Crumbs, which features music and interaction with my old friend and long-time artists-in-schools compadre, Bill Haymes.

“My own” means, yes, I wrote it, as well as performed in it — my very first play.

And yes, I am pretty chuffed about having discovered and worked in a brand new-to-me genre at 65, and eternally grateful to TheatreSquared for having selected it for their 2018 New Play Festival.

How thrilling it was, after all these years pursuing the craft of writing, to be a beginner again, to explore, discover, make mistakes, learn!  (Far more exciting than the goofy thing of being a momentary runway model, believe me. Not that I am dissing that. But essentially, as a model you’re a hanger for the clothes and the discovery lies in seeing if you can be a good hanger).

I have a lot of goings-on coming up this fall, but rather than overload you with those, let’s stay in spring for now.  and one in which I hope our paths crisscross, whether in the kitchen, online, in person… whether through food, fashion, writing, or reading.

I think life works best lived two-handedly. I am happiest when I am both passing on what knowledge I have — as, for instance, in teaching — while I am, with my other hand, receiving: learning, being a student.

So you can probably tell, despite much in the world and our country that terrifies me, and against which I take whatever actions I can, I remain happy on a personal level.

And on that note, I give you, again, the written version of that poem by my late mother, the children’s book writer/editor Charlotte Zolotow, the one I recited in the video.

Little crocus
like a cup,
holding all that sunlight up!

(Illustration by Tiphanie Beeke, from Changes, A Child’s First Book of Poetry, by Charlotte Zolotow)

Hold as much light as your petals allow at present, dear co-voyageur. 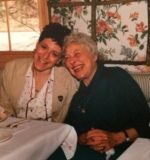 Me and Charlotte, in the restaurant at Dairy Hollow, in about 1992. Photo by the late Ned Shank.