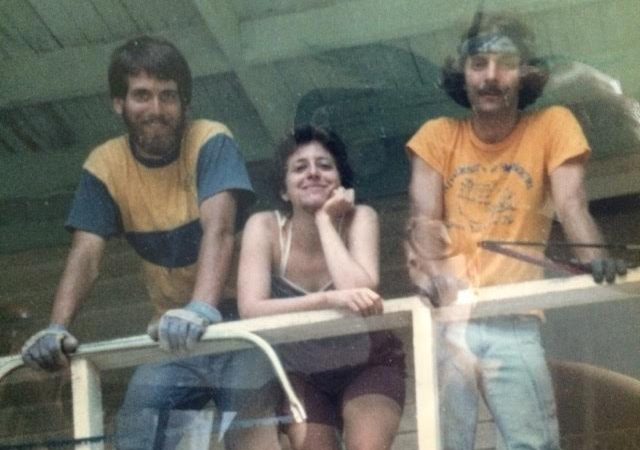 KNOWING YOU LOVED OUR BELOVED TOO HELPS US.

IT EVEN, SOMETIMES, BRINGS HER OR HIM BACK TO LIFE,  JUST A LITTLE.

THERE CAN BE NO BIGGER GIFT.

I’m often in touch with a friend, the musician Bill Haymes,  who was also the best friend of my late husband, Ned Shank. There are two days each year when Bill never fails to call, text or email me: the day Ned was born and the day of his death.

Sometimes Bill’s text will just say, “Thinking of you today, CD.” But sometimes, on a call, he’ll reminds me of something he and Ned, or three of us, or Ned alone, did or said.

Now Bill does not do this funereally; there is no gloom-and-doom solemnity. Usually, when he calls, he’s laughing appreciatively at the shenanigans he recalls. “How did we even got started on the Gorilla Watch Repair riff? ” he might say, on the anniversary of Ned’s death. “I think we were working on the porch at Dairy Hollow, or maybe it was that time on the roof… He was wearing those huge gloves…Good God, that man and a tape measure! Jeez!”

Whatever story Bill tells, affection saturates his voice. “Ned… That Ned.” I hear his pleasure in remembering Ned, right through the fiber optics and airwaves. And though he speaks more or less as if Ned had just gone to the other room instead of exited the planet, I do also hear a touch of something contemplative, elegiac: Bill’s wonder at how large and incomprehensible life is, at what it gives and takes  — in this case, having given each of us, and then taken from us,  the beautiful man who was his dear friend and my beloved husband. Ned, who was only 44 when he vanished from both of us forever.

In this, Bill lets me know he he, too, has not forgotten Ned. And that means that I am not the only one who still misses him. And that, strangely, means everything.”

I have been thinking about why this means so much that I call it “everything.”

There is only one thing, really, that could make it all right for widows who are grieving deeply (at least those of us who had the good fortune to be unabivalently happy in our marriage or partnership with our beloved).

And that is, if we could have her or him back: alive, whole, healthy, present.

And we all know, widows especially, that this is one thing above all else that we can’t have. That we never will. That this separation is forever (at least in earthly terms; some believe they will be reunited in an afterlife, and understandably take comfort in this; since I do not believe this, I do not have this comfort).

The core of grief: death is absolute, non-negotiable. This is the unacceptable, heartbreaking fact with which one must live, and attempt reconciliation.

Except there is one sort of, kind of, miniature exception.

And that is when someone else speaks fondly about your beloved.

Grief is such a strong, set-apart force — something that almost can’t be classified as a feeling or set of feelings. It sometimes scares others (heck, it scares us, the bereaved, too; why can’t we get over it? Why, when we used to be competent and productive, are we forgetting to put gas in the care, and forgetting to pay bills on time?).

But the only way to get through grief is by experiencing it. And that experience, though so difficult, is not bad nor negative. (This is as true as it is counter-intuitive — how could something so screamingly, skinlessly painful be in any way “good”? And it isn’t — but neither is it bad. It just is.).

For grief and mourning are what we have after someone we love dies. Grief is the imperfect, painful method by which we struggle, often unwillingly, seemingly unsuccessfully (especially in the early phases) to integrate love and loss, death and life itself.

Human beings have been practicing the impossible art of grieving for as long as they have loved.

Still, for friends of widows, particularly if those friends are inexperienced with grief, there is little understanding of this. There can be a deep awkwardness around such intense emotions, which surfaces as a reluctance to “make it worse.” To “bring it up.”

And sometimes this translates into being afraid to say the name of our vanished beloved ones.

So, sometimes our friends and consolers and sympathizers don’t. They say little about the man or woman for whom we are mourning and longing with every breath we draw. Though they almost certainly remember our beloveds too, they often don’t do it aloud. They don’t tell stories about them. They’re afraid to do or say the wrong thing.

But for us widows, this perhaps well-intended erasure from conversational memory makes it as if our beloveds had not only died, but had never been here at all.

That we might be the only one who remembers him/her would be close to unbearable. For sure this is part of the disorienting mix of surreality, the agonizing hallmark of early widowhood.

Please, friend of the widow, understand this: your remembering the dead beloved, aloud, with your friend, is one of the few things that can make her feel less crazy.

That’s just one reason saying his name is such a gift. If you let the widow know you loved him or miss her deeply as well, then her grief makes sense.

And she is not completely alone with it.

So please, talk to the widow about the one she or he lost. Some things to understand:

But to have meaning,what you say about the one being grieved has to be specific.

Don’t say, “He was such a good man,” or “No one was more generous than she was.” Or, say such things if you need to, but they don’t really give balm and sweetness to the widow unless you back them up with personal examples.

I will give you an example. Even though I am writing this more than a thousand miles from the basket in my closet where I kept all my favorite condolence letters, I can quote it pretty much from memory.

We were so saddened when we read about Ned’s death in the Arkansas Democrat-Gazette.  We have never met you, but we wanted to tell you how very sorry we were. You see, we only met Ned once, but it was so memorable that we just had to write and tell you.

We were up in Eureka Springs, it was late at night, and somehow we got our car hung up over one of those curbs on one of those sharp curves along 62, and we could not get unstuck. We were standing by the side of the car debating what to do, when suddenly a blue Mazda pick-up pulls up beside us. Out steps a really tall, very handsome guy, who is wearing a suit with an impeccably ironed shirt and a bow-tie.

We show him what’s happened even though it’s obvious.  He says, “Oh good, I just bought a new chain, and I’ve been wanting to use it. ” He gets the chain out of the truck. We say, “Oh, we couldn’t put to you any trouble.” He says, “It’s no trouble! I’m Ned Shank, by the way.” And we tell him our names and that we’re from Little Rock and he starts putting the chain on the bumper. “But you’re all dressed up!” we say. He says, “That’s okay, I just got off work, this isn’t going to be messy.” We asked him where he worked. He said, “I own an inn and restaurant here in town, Dairy Hollow House, with my wife. ”

He gets into his truck, pulls us off the curb and gets out. We start thanking him as he unhooks the chain. “No,” says Ned, “Thank YOU! You gave me a chance to use my new chain!” He throws it in the back and gets back in the truck and drives off, this tall, handsome knight in shining armor who appeared out of nowhere.

You probably already know that that is the kind of man your husband was, but we thought one more instance might be good to hear at this time. We have told this story about Ned for years. What a great guy. We are so sorry for your loss — we can’t imagine. The world would be a better place with more people like Ned — and we feel it is less without him.

With our deepest sympathies…

Can there be a better gift than allowing a widow to know her late husband anew, to still discover things about the person she so loved?

I could picture the whole thing. That chain… the bowtie… So Ned. He would have just cashed out the restaurant after a night. He would have had a piece of pecan pie and a glass of milk as he was doing so, and then put the dish in the restaurant sink, locked up, and gotten in that Mazda to come home to me.  Maybe I was asleep when he came in, because he never told me this story.

But two strangers did.

I cried and laughed reading that letter — a physical letter, on blue paper, not an email. But I do remember feeling a lift, an easing, for the first time in several of those early dark days.

For it was almost like he had, briefly, come back to life.

This post is part of Crescent’s Widowhood Wednesday series.  Three posts appear each month, usually, though not always, on Wednesdays. Sometimes one post is by a guest contributor.

The photograph at the top of this post is of three people, all mentioned in this story: Ned Shank, Crescent, and Bill Haymes. They are standing together on the front porch of what would become the Farmhouse at Dairy Hollow, part of Dairy Hollow House, which the three friends started together in the mid-1980’s.