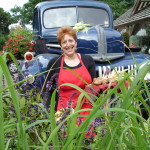 Janus, the Roman god who gave January its name, was two-faced. Not in the saying-mean-things-behind-someone’s back way: rather, he had two faces on either side of his handsome head. Thus, he could look forward, into the future, and backwards, into the past. Notice, though, he had no face for “now”, which is — moment to moment, second by second —… END_OF_DOCUMENT_TOKEN_TO_BE_REPLACED