What a deadly society-wide health crisis in the past might tell us about our own time.

As I began writing a new introduction this year for two versions of my much-loved Irish Potato and Cheese Soup (one traditional, one vegan), I fell down the horrifying, fascinating, somber rabbit hole of the Great Hunger, also known as the Potato Famine, in which nearly one million Irish people perished, and which brought about another million to America as immigrants.

By “this year” I mean 2020, a moment when (should you be reading this some time later, and need reminding) the coronavirus pandemic is sweeping the world, thousands are dying, schools and institutions are closed and closing, some countries are on lockdown.

In America, our leaders initially told us the disease was a hoax, a foreign problem if a problem at al. Then, they claimed it was over-exaggerated for partisan reasons. Then, quickly reversing themselves within a week, they advised us against meeting in groups larger than ten, began to speak of maintaining “social distance” and self-isolating. It was inconsistent, and thus even more frightening. Many local governors and mayors behaved with more forethought, were proactive, wiser and consistent. It may or may not have been too late.

In America, shelves were emptied of hand-sanitizer; fights broke out over toilet paper. Schools, bars, restaurants, places of business, theatres, libraries closed their doors. The stock-markets plunged; economic anxiety soared. There were so many shortages, real and potential. Were there, are there, enough testing kits? Would there be enough hospital beds, ventilators, health care providers? As families were ordered to self-quarantine, to stay indoors and work from home (which meant millions of service-workers were out of work), millions are filled with fear, panicked by economic insecurity and not knowing what will happen next.

Perhaps, depending on when you read this, you will already know whether the pandemic turned out better or worse than we had feared. You will know how long the voluntary self-quarantining lasted, and how many of us were infected by Covid-19, and of that, how many of us died and recovered.

But this moment, the one in which I write this, is a moment of unknowability.

This past crisis, the Great Hunger, was in some ways was similar to the one we are now facing. It too involved a natural disaster of epidemic proportions; an illness, though not (unlike coronavirus) one which afflicted humans directly, but attacked plants  on which they survived. It, the fungus-like blight P. infestans, killed off the potatoes, the staple crop on which poor Irish farmers subsisted, thus killing them.

And it too was one made much worse by lack of forethought, human greed, bad governance, incompetence and malice and ill-thought out policy.

The human species survived; though about a million of individual humans did not.

The circumstances behind the Great Hunger, the mixture of natural and human disasters, it seems to me, are not unlike our own time. Except, as I say, we do not yet know how the present crisis will turn out.

However, this story seemed too grimly somber for what was, after all, an introduction to a celebratory recipe.

So, leaving only a bit of that story there, I decided to tell it, as I understood it, here.

In 1589,when the potato, a plant native to the Americas, was introduced to Ireland, the Irish were predominantly tenant farmers, and they took to it – the potato – immediately and gratefully. They needed something on which to feed themselves, for their circumstances were dire. Not because the 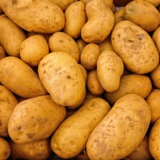 land was inadequate for self-sufficiency, or because they were not hard-working, but because they did not own that land. They were tenant farmers, paying rent to live on farm property to which they could never aspire to hold a mortgage, for it was illegal for them to do so.

Most of the crops the Irish grew were, of necessity, cash crops, raised for export to Great Britain, which generated income, which was needed to pay the rent. Irish tenant farmers lived in effect as a British colony, under the heavy, greedy, class-based thumb of England’s so-called Penal Laws: any Irish persons practicing Catholicism (the native country’s majority religion) were prohibited from owning or leasing land, voting or holding elected office.

Disenfranchised, economically oppressed, the Irish took immediately to potatoes for their own use,  not export. Potatoes were a fine, reliable, ultra-productive garden-crop.  And despite what many in our present all-too-often-carb-phobic world may think, potatoes were and are nutritious. High in  minerals, vitamins, fiber and even a little protein (4.3 grams in a medium potato), a small amount of acreage planted in potatoes provided a large yield of calorie-rich for the family, while still leaving acreage staple food available for more income-generating uses: oats, dairying, flax (for the thriving Irish linen industry). 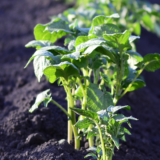 According to DoChara,  “It is estimated that by the late 1700s an average family of two adults and four children needed 5 tons of potatoes a year, or about 5 lbs of potatoes each a day. Though this may seem a lot, even a poor farmer or farm labourer could readily grow this amount on just half an acre.”

Potatoes, with a little of that good Irish dairy added for protein and fat, were pretty healthful as far as poor people’s food goes. And though they didn’t keep as well as beans or grains, which can be stored for years and remain edible, for a fresh vegetable potatoes kept remarkably well: up to nine months if carefully stored. Particularly prized during the cold winter months, when nothing else fresh and edible grew, we see here the origins of Irish potato soups.

For what dish is more warming or agreeable or easy to extend than soup? And with some dairy on hand, what is better?

PRELUDE TO A FAMINE 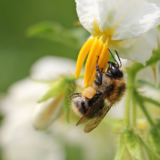 A bee, pollinating the blossom of a healthy potato plant.

All subsistence or near-subsistence diets, relying as they do on one major, usually starchy, foodstuff, are bereft of some essential nutrients.

But potatoes, with a little of that good Irish dairy added for protein and fat, were pretty healthful as far as poor people’s food goes.

And though potatoes didn’t keep as well as beans or grains, which can be stored for years and remain edible, for a fresh vegetable potatoes kept remarkably well: up to nine months if carefully stored. They were particularly prized during the cold winter months, when nothing else fresh and edible grew.

But beyond nutritional deficiencies, there is another problem with heavy agrarian dependence on one major crop. It is mono-cropping: growing one plant in excess, thereby lessening bio-diversity. That one plant which is grown to the exclusion or limits of other becomes that much more susceptible to insect invasion or disease.

As time went on and even higher-yield potato varieties were introduced to Ireland in 1760 and 1800, oats grew even more valuable as a cash crop — and the Irish needed cash to pay their rent, for remember, they were forbidden to own land.  Potatoes thus grew further entrenched as the staple food of the Irish poor.

Until 1845, all went as well as it could (given that Ireland was in effect Great Britain’s colony, insuring — as is  with colonized or semi-colonized people exploited for their goods or services — that the natives were impoverished, without many opportunities to get ahead, living close to survival). 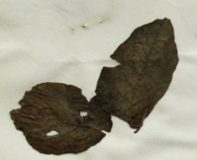 A photograph of blight-afflicted potato foliage, from the Smithsonian. Compare this with the bright green of the healthy plants; imagine these darkened leaves wet with rot, stinking.

Then, in 1845, a blight, P. infestans, infected the potato crop. On which, by then, the Irish were almost wholly dependent.

Although by 1829, fifteen years before the blight, the Penal Laws had largely been repealed, their pernicious impact was omnipresent in the form of land-ownership. English and Anglo-Irish families, often absentee, still owned the vast majority of Ireland; most Irish Catholics remained tenant farmers, paying rent to the landowners.

It was this iniquity plus the blight that caused The Great Hunger, also called the Potato Famine (or, in Irish, An Gorta Mor). 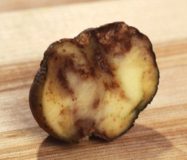 The soft, diseased interior of a blight-infected potato, before it had completely rotted.

When the potato blight hit it rendered the vigorous green plants black, their fallen stems and withered foliage rotting in the field. Their treasure of firm brown tubers below the soil also went soft, stinking, rotten and inedible. According to the History of Ireland, a unnamed ‘priest in Galway’ wrote ‘As to the potatoes they are all gone – clean gone. If travelling by night, you would know when a potato field was near by the smell. The fields present a space of withered black stalks.’ “

Between one-third and half the potato crop was destroyed in the first year of the blight,  and hardship (although not yet starvation), stalked the land and its potato-dependent people. The price of what potatoes there were more than doubled over that winter. But that was just the start. 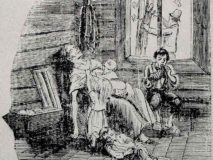 Though the blight’s severity waxed and waned,  it would destroy three-quarters of the crop over most of the next seven years, with catastrophic results. An Gorta Mor took hundreds of thousands of Irish men, women and children to miserable deaths from starvation and related causes (dysentery, cholera, malnutrition).

Ireland’s population never recovered to its pre-famine levels. To this day.

Yet even at the height of the famine, luxury commodities such as peas, beans, beef, rabbits, fish, butter and honey continued to be exported from Ireland to England.

THE RICH (OBLIVIOUS? HEARTLESS?)  GREW RICHER, WHILE THE POOR…

For although many subsistence tenant farmers had enough land to grow crops other than failing potatoes, they were trapped in an impossible bind – they had to sell these other crops to pay rent or face eviction by those absentee British landlords. While the History Channel says, “The exact role of the British government in the Potato Famine and its aftermath—whether it ignored the plight of Ireland’s poor out of malice, or if their collective inaction and inadequate response could be attributed to incompetence—is still being debated,” there actually is not much debate: the Great Famine was caused not just by the blight, but by the widespread eviction of starving tenant farmers caught in this bind.

Again, from Dochara: “While some landlords allowed their tenants to retain grain crops for food and reduced their tenants’ rents or even waived them, others were remorseless.”

Here’s one bailiff’s remark to tenants he was evicting, as quoted in the April 1846 Freeman’s Journal:

‘What the devil do we care about you or your black potatoes? It was not us that made them black. You will get two days to pay the rent, and if you don’t you know the consequences.'”

The potato’s viability and crop robustness didn’t fully return to Ireland until 1852. By then, about 1 million Irish men, women and children, the majority of whom were by then homeless (having been evicted for their inability to pay the rents), had perished from starvation. These were slow, terrible, and largely unnecessary deaths.

Had the wealthy British and land-owning classes not been as blighted by greed and blindness as the potatoes were by fungus, there would have been no Famine.  The Irish could have lived off their non-blighted crops, which, instead, they were forced to export — for the cash they needed if they were to keep a roof over their heads. (For a penetrating look at how this material is taught in America schools, how it could be taught, and the hunger-and-colonialism-related stories still going on in the world today, see this).

The Famine also caused another 1 million or so Irish people to leave their green island, a place beloved but so hostile to their existence. Many of those who survived the “coffin ships” (the steerage fees often paid by charity) landed in North America.