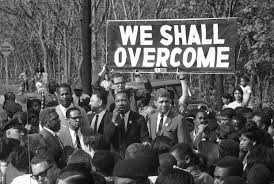 But Charlotte, my mother, would merely give her half-smile, inscrutable. Like almost everyone else, she called the song “The Shadow of Your Smile.”

That’s a line from the lyrics. The most memorable line, the one which everyone who’s ever heard it recalls. The one under which almost everyone who’s covered it —  including Tony Bennett, Stevie Wonder, Ella Fitzgerald, to name a few —   records it.

My parents were partial to the Lou Rawls version. They agreed that it was their song ; at least, their second song (their first had been Hoagy Carmichael‘s 1927 Stardust, popular when they met at University of Wisconsin at Madison).

As the New York Times noted at the time,  the ” …Hollywood custom of pretending great piety while flirting with material that is suggestive and cheap has seldom been more adroitly practiced than in … ‘The Sandpiper.'”

That this insignificant melodrama, all heaving pulchritude, came out in 1965, a year of much social significance,  is even stranger.

1965 was a tense, bewildering, before-and-after year for America. Much that had endured and been endured, left undealt with to simmer below the surface, was finally about to erupt.

The tremors were echoed, though not causally, in the small tense world of my

I was twelve, childhood’s old age. Though my father would join AA in 1970, in 1965 he was still a working writer and a husband, and sliding towards the destruction of both. My mother’s professional star, as both a writer of children’s books and editor, was rising, even as she covered for my father’s lapses (a practice only later known as “enabling”). Even as their marriage lurched beneath the twin weights of genuine love and complete unworkability. Even as she had health difficulties culminating in a hysterectomy at year’s end. 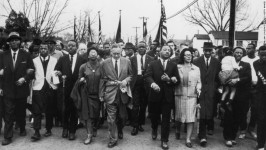 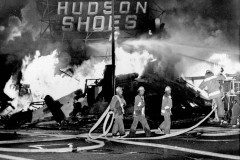 With so many dramatic upheavals at home, Americans hardly noticed that by year’s end more than 190,000 of her young men had been shipped off to fight in a small, largely unheard of southeastern Asian country called Vietnam. 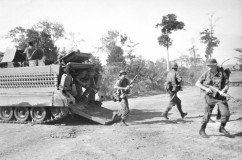 In that liminal year, I was young enough, still, to often willingly accompany my father when he drove to the train station in Hastings-on-Hudson, New York ,to pick Charlotte up when she came from work in Manhattan. (My father worked in a home office, in the attic).

As we sat in the car waiting, my father and I would listen to the news on the radio.

He wept more than once: at the news of Malcolm X’s death (“Brilliant man, what a

“I tell you, Ellen,” ( I was Ellen then) “What this country has done to colored people… it’s a terrible, terrible thing.” Always outraged by racial prejudice, my father had begun his career writing for Billboard. He was a great lover of jazz, and in the 30’s had often been the only white person in the audience at the Apollo and the Cotton Club. He did the first ever on-the-road piece-with-the-musicians piece (about Duke Ellington, I believe for Saturday Evening Post; he never got over his outrage that the only restaurant outside of specifically black restaurants in New York City in which Duke could eat were Chinese restaurants). “And he was playing the Copacabana! But he still had to eat in a Chinese restaurant after the show!”)

When my mother emerged from the train, she always carried much in addition to her purse. There was usually pastry from the Éclair Bakery in Grand Central, the white box neatly tied with thin, red-and-white string; dessert, an offering from a mother who — it was still that era — felt guilty about going to work.

And always, there was her huge beige tote-bag, stuffed with manuscripts from the children’s book department at Harper and Row. A few years earlier, it  had

contained the manuscript of Harriet the Spy;  a few years later, it would hold that of The Pigman. Books that made her an unlikely revolutionary.

For, though Charlotte was herself the author of 50-some children’s pictures books, she was also an editor, of books for the youngest readers up to those in their teens. She went for material that was distinguished in literary terms, but was often, as well, socially prescient. “Her” authors often took on mental illness, ostracism by race, sexual identity (she published the first YA to deal specifically with homosexuality, Aidan Chambers’ Dance on My Grave), death, and — hard to believe this was then so

controversial — simply the honest portrayal of parental imperfection, and children who were sometimes far wiser than their parents.

But these were never “issue” books as such; when such realities appeared, they were inherent to the characters and story. Charlotte worked just as hard to draw authenticity and good writing from those she edited as from herself. The books she loved — to read, edit, and create — were unflinching but always well-written.

Still, in what they touched, her books were far more on the pulse of the times, closer to what was happening in the streets, on the news, in America’s psyche,  than  the idiotic Sandpiper.

About which my parents’ running dialogue continued for months.

“Oh, put on ‘Shadow of Your Smile‘,” Charlotte would say. ” ‘Theme from the Sandpiper’!'” my father would bellow correctively, as he carefully set the needle down on the record.

That King would also be assassinated. That the civil rights movement was a fire that would burn long after Watts cooled. That one day America would have a black president. That his presidency, in my opinion, would re-ignite the flames not of civil rights but of America’s still-and-ever-present racism, which it turned out (to me, who did not have to see it every day, because of my white skin) to have only ever been even slightly latent.

That Vietnam, too, would smolder on, becoming what many people now in their 60’s and 70’s consider a turning point: the moment where and when America lost its way as a beacon of liberty, democracy, and clarity.

That — in the tiny  Zolotow world — my  parents would divorce, four years later, a small domino which knocked down many other small dominos, as divorces often do. Every yes, after all, means a no, every no a yes. Every end begins another collection of possible beginnings and outcomes. Vietnam, for instance, altered much that was fundamental in America, and how Americans saw themselves. And the lives my parents had, and that I have, our small histories in the great creaking numberless stories that make up the world, were also stories altered.

teasing while under the influence

When my mother had that hysterectomy at the end of the year in 1965, my father worried obsessively. He fixated irrationally on this: what if, somehow, she lost her mind while under anesthesia?

He waited in a swivet of anxiety. When she was wheeled out of recovery, he sprang to her side, calling her name by the gurney. “Charlotte? Charlotte!”

Charlotte, teasingly, was swimming up from the fog. She said, jokingly, “Sandpiper.” And went back to sleep.

Maurice came home after the hospital visit. He was still visibly shaken.  I asked him how Charlotte was. “I hope your mother’s going to be okay,” he told me.

He shook his head. “I don’t know, Ellen. I asked her if she knew who I was, and she started talking about birds.”

“Sandpiper,” he said, and he shook his head again. “She said ‘Sandpiper.'”

I started laughing, “Maurice! ” I said. “She was talking about ‘The Shadow of Your Smile.'”

Then he stopped. He looked at me.

It’s said, and correctly, that all we ever have is now: the present. But it is also true that ‘now’ is an opaque curtain, hiding the future. I cannot consider myself, my parents, and 1965 without thinking of all we didn’t, and couldn’t, know.

On the whole, I am grateful for that opacity.

I wrote, week before last, about attending the memorial of Maurice Sendak, who was part of Charlotte’s two worlds — CZ as writer (he illustrated one of her books. Mr. Rabbit and the Lovely Present) and CZ as editor (she, and her mentor Ursula Nordstrom, who was Sendak’s discoverer and ushered him into children’s literature). In that post, Baking Poundcake for Maurice Sendak, I said I’d wait to post my conclusions about his memorial, and how it shaped my choices for Charlotte’s, almost 2 years later.

As the thunderous Toscanini recording of Verdi’s Finale from Falstaff crescendoed, 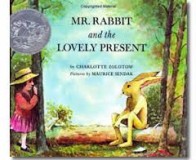 covers of Sendak’s books, one by one,  in chronological order, were shown on a large screen. No images of him; just the work. It was perfection: that triumphant music, that blazing, building shooting star of a body of work. But not only did it praise Sendak. It praised art, gift, talent. It said, more clearly than any individual speaker had, “Though artists die, their work lives!”

And so, those of us in that audience, grieved and celebrated simultaneously and in wonder.

I knew immediately that I’d do something similar, when the time came, for Charlotte. What song? No question.

The film I worked on, in the press of time, with a Brattleboro film editor, is not perfect. It does not show all Charlotte’s books; it is not in chronological order. And it does not have the mood of towering triumph that Sendak’s did, nor did I mean it to.

But the song itself, the words my parents play-argued over, was something original to us — to me, to them. Inspired by but not imitative of Sendak’s tribute, it was particular to the can’t-live-with-can’t-live-without marriage of my parents, of 33 years’ duration before they finally divorced (and they weren’t done even after they divorced, but that is another story).  It was also particular to their deaths: as I put the montage together, my mother was newly deceased;my father, had left this world almost 25 years earlier.

Forty-eight years of staggering change lay between 1965 and Charlotte’s 2013 death. So very much happened, is happening still, will continue to happen in our big, brash, bittersweet, glorious, beleaguered world, so lovely and so imperiled.

The Zolotow family story is so small, set against matters like the civil rights movement. And even that is made small in comparison to the seemingly irrevocable ecocide human beings, by their behaviors, seem dead-set on for their home, Earth.

The end of the planet meaning as it does, or would, the end not only of every family and every human life, of every race, but that of every species. The end. Finis.

Still. For now, anyway, we live, and die, as individual human beings. In the great Book of Life in which the story of the world is written, each of us is a few words, a sentence at most.

And some of us, in our words and deeds, seem to edge the human social constructs of this world closer to hate and destruction, and others closer to peace, love, truth, justice, and understanding.

And in her small but significant way, I believe my mother’s words and deeds to have been in the latter camp.

Watch, when you view the film below, for the shadow of her smile.