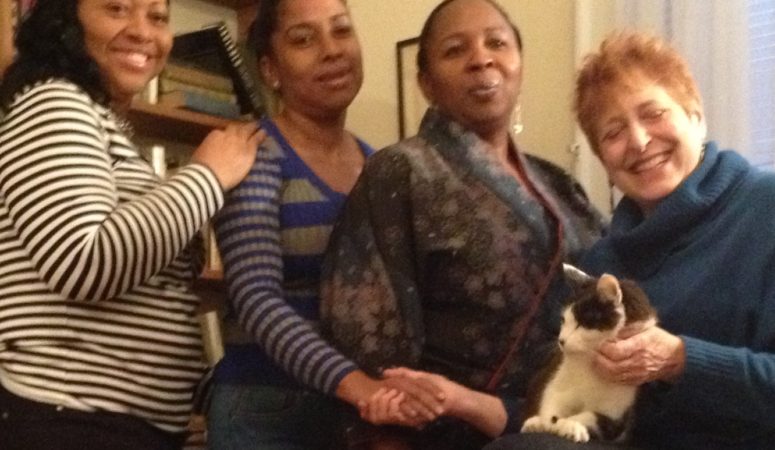 As the granddaughter of despised immigrants (Russian Jews) who worked their way up from nothing, doing factory leather piece-good work on New York’s Lower East Side, I have always felt that far from taking away jobs or anything else, newcomers energize America.

For as long as I’ve understood what they, like most immigrants, endured to get here, I have also understood that people who managed to make it here did not want a handout. They were not people who sought ease, or were unwilling to work. They were unlike the ones who stayed put. To some extent maybe the ones who stayed put were victims of bad luck,but for many, what held them back was something else. The were often the ones who chose the familiar, even when it was brutal, because    however risking the unknown was harder. Not always but often, those who did not immigrate, were the fearful… as well as the slackers, the lazy, the unambitious, the hopeless, and yes, sometimes the luckless. They choose certain suffering — poverty, persecution, and political oppression — over suffering the terrors of a world where they’d have to start over, in a language they did not speak, in a place with strange customs, golden ideals, and big promises but absolutely no certainty.

Desperation was not enough to propel people like my grandparents, and present-day immigrants, forward. Only those whose desperation was tempered with courage, daring and hope made this perilous, ambitious journey, risking everything for the slimmest chance of freedom and opportunity. They were the literal go-getters, despite almost inconceivable costs psychologically, emotionally, and financially.

Because of this, when I get to the phrase  “the home of the brave,” in singing our national anthem, I think always of America’s immigrants, who, by sheer bravery, chose to make this country home, and in so doing, made it better.

My understanding of immigration, and the toxicity of anti-immigrant sentiment, has many reasons besides my own heritage.

These reasons were underlined during the five years I journeyed with my late mother through her extreme old age to her eventual death. I was able to make this journey only with the help of her caregivers. To a one, they were immigrants. From Jamaica; from Mauritania and Liberia. The picture above this post: Corine Wells, Carlene Gabidon, Hawa Diallo, me, and Tumbleweed: we all took care of Charlotte together. As I came to know, and then to love, the final team who made this journey with me and my mother, my sense of how difficult is the path of immigration became more clear and present-time.

One of Charlotte’s unlikely angels was Hawa Diallo, who barely escaped being murdered in the genocide which afflicted her native Mauritania. After barely escaping with her life, she lived for two years in a refugee camp in Senegal before finally receiving asylum in the U.S. English was her fourth language. Hawa faced a sextuple whammy of difficulty and prejudice in her new country, being not only an immigrant, but black, Muslim, female, poor, and illiterate. Yet she had forces in her so strong, that, despite all that could have held her back,  they could not be extinguished. Those forces? The artistic gift she found in America (see  her story, and art, here, in Oprah Magazine); her native intelligence (though she had no formal education), and her deep and heartfelt lovingkindness, which she and my mother both experienced.

It is true now, and it always has been, that successive waves of immigration force America and Americans to adjust and readjust. It is also true that this is often uncomfortable for those who were already here.  I do understand this uneasiness  — it shames me to confess that I remember being deeply unsettled the first time I saw a “Se habla espanol” sign in a Berryville, Arkansas, WalMart, probably 30 years ago now. Newcomers, by virtue of being new, are different; strangers are by definition strange (to us).

And yet I believe this discomfort is a good thing. These newcomers — and indeed, the uneasiness they arouse in us — are the bubbling yeast which raises, expands, and grows democracy, that beautiful, revolutionary idea at the heart of America. They force us to rise or fall; they ask us to examine our hearts and minds and see which is bigger within us: humanity, or fear?

I write these words the day before the presidential election of 2016, the unprecedented contest for which has strained and tested our national self-definition to the last fiber. Never before has an American presidential race unnerved and made anxious so many, and for just cause.  We are being asked, again, to examine our hearts and minds, and see, in the most profound way, which is bigger: humanity, or fear?  Would we — will we — rise to what is best and highest in us collectively, or give over to the howling, atavistic fear of the stranger, the other… whether s/he is “other” because of race, gender, religion, or skin color?

I am one of those who the campaign has made anxious.  Even as I gave more money than I have ever given to any political race (up and down the ballot), even as I did everything I could to insure that my candidate would win — the candidate whom to me unquestionably embodied inclusivity, intelligence, thoughtfulness, preparation, stamina, cool-headedness, and civility (and who happened to be of my sex, and who I happened to know from my Arkansas days)  — even as I did that (and at times blew off steam by deciding I would throw a “Phew!” brunch on the Sunday after the election), I was still almost beside myself, vibrating with tension, keeping despair only slightly at bay. And I know I am not alone in this.

By last Saturday, November 5, the jitteriness was almost unbearable. Knowing I was not alone in my tension did little to abate it.

And then I read this story. Headlined “They waited in line for hours. If you’re not inspired by the candidates, be inspired by them,” it’s about the incredible outpouring of early voting among Latinos and Latinas, those on whom such vitriol has been thrown this election.

And in reading it, I found my faith, and hope, restored. Restored by their faith and hopes, and their actions.

Once again, immigrants — in this case the Latina/o newcomers — are revitalizing America. Making us live up to our best and highest ideals.
Showing us, again, what it really means to be American. To have rights and to stand up for them. Despite inconvenience. Despite intimidation.

The voting, and the early voting, by this population block, may just protect and even give us — all of us, the true, inclusive us —- back our country. 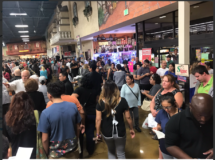 The “This is insane line at Cardenas Market on the last night of Early Voting” in Las Vegas, Nevada.
Photo credit: @josemacias8