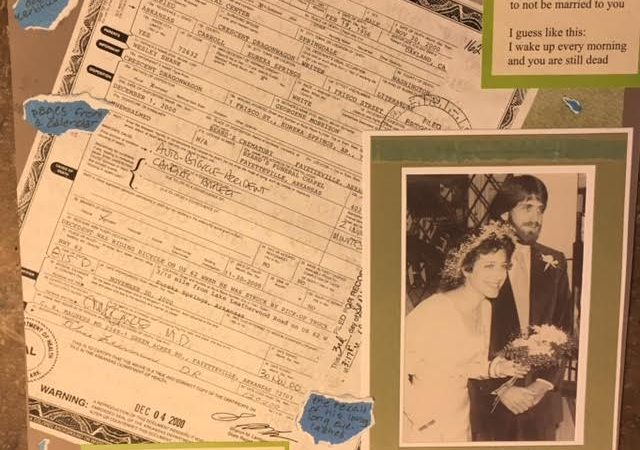 Though we spent our first anniversary in Paris, we’d honeymooned in the Ozarks, in Ponca, Arkansas, not far from where we lived. When we drove home after our days in that rustic, rubble-wall hotel on the Buffalo River, we stopped in Berryville.  For some reason I can’t recall, he needed to pick something up at a hardware store. He went inside, while I examined bulbs for fall planting, in a sidewalk display outside, in the honey-gold October sunlight.

When he came out, he told me, laughing, “So he asked me, ‘Will that be all?’ and I said, ‘I think so, my — ‘ and I stopped and paused for a second and let it roll through my brain and then I finally burst out, ‘wife is outside, looking at something!’ ”

That was the first time he’d called me that. That role, that name, that relational identity always preceded by a possessive (territorial at times, tender at others, and after awhile, matter of fact). But it was not the last time I was, in his mouth and his eyes and heart, “my wife”. Not by a long shot, not by 23 years of a long shot.

And while I don’t remember the first time I referred to him as, “my husband,” it must have been, in toto, at least as many.

But now, for almost seventeen years, I have referred to him as “my late husband.”

“The Bustle in a House,” wrote Emily Dickinson, ”  The Morning after Death /  Is solemnest of industries / Enacted upon Earth – / The Sweeping up the Heart / And putting Love away / We shall not want to use again / Until Eternity – ”

But the bustle went on periodically, and agonizingly, for me, in the long strange weeks and months after his sudden death at age at age 43 (to my 47). I remember sitting in  Community First Bank, in Eureka Springs, Arkansas, having been ushered into a semi-private room, to change the checking accounts, which would now bear my name only, not his and mine. I remember weeping helplessly: how could such an erasure — from a checkbook, from the Earth on which he no longer resided, from life itself — be possible? The teller, kind, unsure what to do, trying hard to do the right thing though there was no right thing, pushing a box of Kleenex towards me, equally helpless too, but repeating helplessly, “It’ll be all right, it’ll be all right.”

Is it all right, all these years later? Yes. No. Maybe.

Yes: I am happy, in my work and friendships and, improbably, loving again, a man who is my age and my equal, with whom I do not live, but to whom I am absolutely and joyfully committed, as he is to me. Though he resides in a different state, 200 miles away, for three years we have rarely gone more than two weeks without seeing each other.

No: I miss Ned always, and periodically, though farther and farther apart, come the storms of sudden grief; and what am I to make of the man I lived with for almost a decade after Ned’s death, but to whom I was never married, and who also died, but by his own hand after a long losing battle with depression?

Maybe: I’m still in the middle of life, who knows how it will come out, and whether it will be “all right” and what that even means?

And meanwhile, when, at the doctor’s office, I am asked, “Name of person to call in case of emergency?” what am I to say?

But the main thing is identity. I was someone’s wife, someone who used the possessive and the role when referencing me. I was “his wife.” I am no longer. I am his widow, but…

I know this much: categories are hard. At another doctor’s office, I recently had to fill out another form, and there was the odious line I remember weeping over even harder than at the bank, 17 years ago.

I stared at it as I always do:

Single? You could make that case. I file tax returns solo. My name is the only one on the mortgage and car loan. The man in my life lives in New York; I reside in Vermont.

Married? Yeah, twice, but not presently.

Divorced? Yeah, once, but that was a starter marriage — I was freakin’ 16 years old, it wasn’t my real marriage.

Widowed? Yes. My real marriage ended in his death. And then what about the man I lived with, and his departure from life, which makes me, on that account, not only twice-widowed but in that second case what I have heard called “a suicide widow”? (Are there two more terrible words to conjoin?)

Except: what about my three years with the man I call my Alpha Dude, with whom I share (though we do not live together) what he once referred to as “a quasi-marriage”? For whom, to my astonishment, at age 64, I put on lingerie and happily engage in acts that some would consider unspeakable, certainly for people our age? Where does that fit in?

There is no category for [] all of the above, or [] none of the above on such forms, and if there were, I am not sure I would check either.

I know doctors want to know this in part because social connections or their lack are such a good predictor of health.

But live long enough, and your social, romantic, and sexual life just might defy categorization.

And don’t think, even if you eventually land on your feet (except when you are, consensually and happily, on your back) as I did, that it is not at times confusing.

As the writer Ann Benjamin remarks in Life After Joe, her novel about widowhood,  ““You’re not a virgin and you didn’t get divorced, but suddenly there’s this thing you can start doing again with someone who is not your husband.”

And for those who are widowed, who are grieving, who do not have the kind of love in their life again which I have been lucky enough to happen into, for those who do not know if they ever will, and are not sure if they want it, for those in the phase where the longing for that possessive role which is no longer theirs to be or to have and to hold, for those…these categories are another source of agony.

As if a widow or widower needed more of that.

In the end, filling out that clipboarded form in the doctor’s office, I inked in a fifth box, using the registration desk’s regulation-issue cheap ballpoint. And next to it I put in the category which seemed closest to where I’m at.

I borrowed those immortal words offered as an option for “relationship status” by Facebook, perhaps the truest words ever to be generated by that entity: “It’s complicated.”

Then I checked off the box I had drawn.

Illustration: a page from a scrapbook I started four years after Ned’s death; here, his death certificate is collaged with a picture from our wedding. I was still grappling, unsuccessfully, with what I had lost. I never finished the scrapbook.