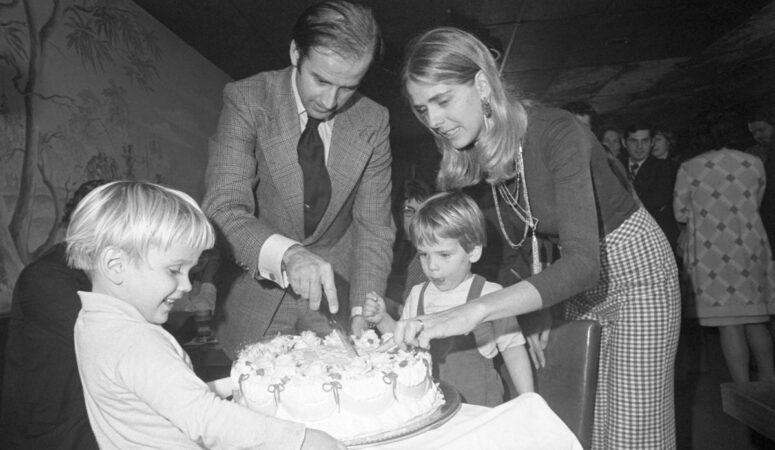 “Her first husband died in a workplace accident when she was 24 and pregnant with their second child.  ‘Becoming a young widow changed my life,’ she said.”

Suddenly, reading these words recently in the New York Times, sitting there at the old oak table in the kitchen, having breakfast, the hair on the back of my neck rose.

There are many reasons why this election has forced us to discuss empathy and compassion. Most are obvious.

But one less obvious factor is this: widowhood, and the grief and altered circumstances it brings, have shaped certain candidates.

She, in the quote above, is Theresa Greenfield, the centrist Democrat running in the Iowa Senate race, challenging incumbent Joni Ernst, the pro-Trump Republican.

“I didn’t have any way to pay my bills,” Theresa Greenfield continued to the Times. She kept her family going, after her sudden widowhood, on Social Security survivor benefit payments. Greenfield — a self-described “pretty dang scrappy young farm kid,” never forgot how close she came, how precipitous her drop towards poverty, right in the middle of grief and loss, had been.

And she never forgot what saved her. Her website, unsurprisingly given this, reiterates her deep commitment to Social Security and health care.

Widowhood and grief are often, too often, an environment in which empathy and compassion grow.

It’s something like: if the unthinkable could happen to me, a good, responsible, kind, hard-working person, who followed the rules of decency — it could happen to anyone.

Once you know this first hand, you are changed. In your relationship to others, and to the world.

How could a loss so profound and dimensional do otherwise? We may find we are kinder towards others, and more understanding, by far, of just how outrageous fortune may be, and how extremely unpredictable and cruel its slings and arrows sometimes are.

Of course, Theresa Greenfield is not the only candidate shaped by widowhood, grief and altered circumstances.

I give you Joe Biden.

That Joe Biden was widowed young is something I thought everyone knew. But I was wrong. Just the other day, talking to the young woman who cuts my hair, I learned she had no idea of how loss has dogged and sculpted the candidate’s life.

I told her what I knew, and went home to read further.

The 2019 AP story titled “A public man, shaped by private grief”  begins with a 1972 scene straight out of Hallmark: the 30-year-old Bidens, the new senator-elect and his wife Neilia, are sitting around the fireplace in their Delaware living room. It’s about six weeks since Joe won the senate race, and a week before Christmas. Neilia’s addressing Christmas cards, and listening to Joe dream aloud about his recent win, and what he plans and hopes for in the life he’s about to begin as a public servant.

But then Neilia interrupts him. ‘What’s going to happen, Joey?” she asks her husband, Biden later recalled. ‘Things are too good.’ “

The next day, Biden took the train to Washington, getting a jump on setting up his new office. His phone rang.

Neilia and the couple’s three children had gone out to select a Christmas tree, and their car was broadsided by a tractor-trailer.  Their sons, Beau, 4, and Hunter, 3, were seriously injured. And Naomi, the couple’s 13-month old daughter, was dead. And so was Joe’s beloved wife, Neilia.

“I began to understand how despair led people to just cash it in; how suicide wasn’t just an option but a rational option,” Biden wrote in Promises to Keep, his 2008 memoir. But looking at his two surviving sons, Biden wrote, he wondered “… who would explain to my sons my being gone, too. And I knew I had no choice but to fight to stay alive.”

His sleep, of course, was fitful, and in it, Biden writes, he was sometimes, “aware of the dim possibility that I would wake up… and this would not have happened. But then I’d open my eyes to the sight of my sons in their hospital beds — and it was back…Most of all I was numb, but there were moments when the pain cut through like a shard of broken glass. Except for the memorial, I stayed in the hospital room with my sons. My life collapsed into their needs. If I could focus on what they needed minute by minute, I thought I might stay out of the black hole. ”

What widow or widower — most especially those who suddenly lose a spouse with whom they were deeply in love,  and are left to be the sole provider for young children  — does not recognize this?

“My future was telescoped into the effort of putting one foot in front of the other. The horizon faded from my view,” Biden continues.” Washington, politics, the Senate had no hold on me. I was supposed to be sworn into the Senate in two weeks, but I could not bear to imagine the scene without Neilia.”

He considered resigning the Senate seat he had just won, but, at his colleagues’ urging, agreed to stay on for six months.

And thus began his life in politics. As well as his schooling in grief, and living through it, with that quality most often labeled “resiliency.”

For 43 years later, in 2015, nearing the end of his vice-presidency under Barack Obama, Biden, in addition to all the big national and international griefs laid at the feet of any world leader,  was to have another crushing personal loss.

One of his two sons who survived the crash, Beau, died from brain cancer.

“It is easy to count the dead, harder to count the grieving,” notes writer George Blaustein in an article in the New Republic.  Each year, he says, almost one percent of the American population dies. He cites the most recent available official count, for the year 2017,  from the CDC’s  National Vital Statistics System: 2,813,503 registered deaths.

When Biden contemplated American death statistics while working on the grief memoir Promise Me, Dad: A Year of Hope, Hardship, and Purpose, he wrote that each of the dead “left behind at least one or two people who were deeply and profoundly wounded by the loss; some left a dozen bereft, others a score.”

Those bereaved people, he wrote, manage to “get up every single day, put one foot in front of the other, and simply carry on.”  His sense of their heroism in so doing is palpable. “There is an army of these soldiers,” he writes. “By my estimation, at any given moment, one in ten people in our country is suffering some serious degree of torment because of a recent loss.”

Grief does not automatically make one fit for office. Yet, as Blaustein posits, if Biden has a natural constituency, it may be found among those who have known this non-negotiable and absolute loss. “It is a shifting mass, this constituency,” Blaustein notes, “but all of us at some point join it.”

There are, as I have said, many reasons why this election has forced us to discuss empathy, decency, and compassion.

We have seen what a presidency lacking these qualities looks like, and how quickly, it turns out, such a presidency can divide, rile and roil America.

How it can fail spectacularly at dealing with problems, especially those that, though predictable in general (pandemics; “extreme weather”), rise with horrific particularity (Covid-19; Hurricanes Harvey, Irma, Maria; the Camp Wildfire). How it can force us to ask ourselves who we are (a people who cage children who have been forcibly separated from their parents;  who rationalize such policies on the grounds that they “send a message” regardless of the human cost).

As we reach the end of 2020, a year rich in death, disruption, chaos, isolation, freakish and cruel events (some policy-driven, some random), it is worth remembering empathy, decency, compassion. Words we are hearing as part of the dialogue in a run-up to a presidential election as never before. Words that could not be more timely, given our era and our choice of candidates.

If we are ready for a different kind of leadership, perhaps, among other factors, we should consider the bedrocked experience of widowhood, which has shaped Biden, and in my view, made the sufferings of others visible and felt, to him. He has used grief in one of the few ways it can be used: to give meaning. For Biden, as for Mr. Rogers (to whom he was recently compared) that meaning seems to be in the profound desire to help; to leave things better than he found them.

Empathy, decency, and compassion are not, by themselves, enough. But, along with resiliency and intelligence, they are qualities that will go a long way towards making sure that one death we do not have to grieve is that of America.