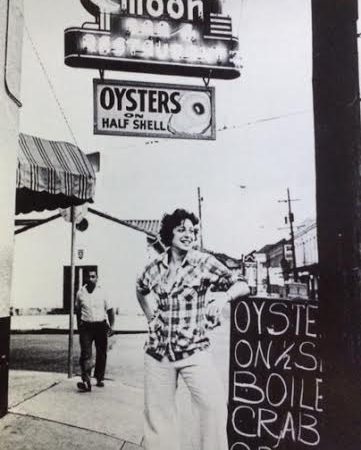 My long out-of-print children’s book WIND ROSE  just may be re-issued. Unlikely: outest of out chances, longest of long shots.

Still, I needed to find a copy to send to the perhaps-publisher.

I went to the shelf where I keep copies of books I’ve written in my  (this is unbelievable to me) 47-year career as a professional freelance writer (my first book was accepted when I was sixteen).  I have only five or six copies of each title, and 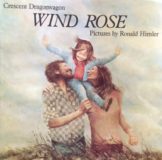 the older ones are all a little beaten up.

And there I found it, my fifth published children’s book, my eighth published book (counting the other genre, cookbooks,  in which I was to to do most of my work).

In WIND ROSE, a mother tells her child about the night of her birth.  The text will probably not see life again as a children’s book as such, not in these prudish and censorious times.  But it may be reborn as something. I am in dialogue with  a publisher I like a lot, about several projects, of which this is the least likely. But, since one of their specialties is books on pregnancy, childbirth, and parenting, who knows?

I wrote it in 1976. A couple I was then very friendly with had just had their first child at home.  I, at 22, still  with the possibility of having children of my own someday, was deeply curious. Marianne, the new mother (we are long out of touch) was kind,  thrilled to share the process with me both during her pregnancy and not long after the birth.

When I got back home the night of my first meeting with the infant and hearing Marianne’s story of the actual delivery,  I  went straight to my old IBM Selectric typewriter. I sat down, as if taking dictation, as if in trance, and wrote my imagined version of her story.

I remember a strange moment that night,  when I finished, pulling the last page from the platen. As if from outside myself, yet in my mind, as if I was picking up radio signals, I got this is as close as you are going to get to actually having a child. This was given to you instead.  The hair rose, prickling the back of my neck. Don’t be silly, I told myself.

And yet it was true. I never did have children. Was unable to. Thanks, Dalkon Shield.

WIND ROSE,  still much-loved at GoodReads, is  far too explicit for today’s incomprehensibly repressive era. But at the time of its publication, it was mostly welcomed and loved. (There was one banning, eight or nine years after it had been published, at an elementary school in Alpharetta, Georgia, for which I was grateful — it sent the book right back into print).

“The author works some elementary sex education into the very tender, first person account of a  ‘birthing’, ” noted the usually grumpy Virginia Kirkus Reviews, at the time “… by the sort of dungareed parents… who would name their firstborn 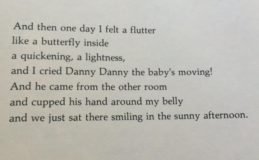 Wind Rose ’cause the wind rose warm and wild on the day that you were born.’ Wind Rose’s mother tells her how the wind rose up also on the night “”we thought of you . . . Your father was inside me and we were wrapped so tight and close and loving. . . . Wind Rose, we had too much love for two and that was the night we thought of you.’ She remembers too the nine months’ anticipation.. And at last (‘It didn’t hurt, but such hard work’), Wind Rose emerges–‘so much more than we could wonder.’ …a romanticized but appealing version of a story that always bears retelling. ”

School Library Journal was even kinder: “A tender prose poem of mother love (with illustrations) that capture the warmth of the text…Both parents share in the joy of feeling their child move in the womb, the excitement and the labor of birth, the wonder of seeing their infant… The story flows with smoothness, directly and simply describing the anticipation and satisfaction of having a child.” 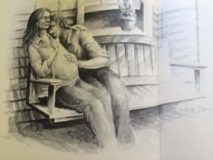 Until I got my copy of the book out to mail, all this had slipped from my mind, as had the fact that it was once even made into a short movie by Phoenix Films, in 1986. This caused me to remember the premiere, in Hollywood, at which my Aunt Gloria embarrassed me by telling me loudly how delicious the food was at the buffet following the screening, and wrapping up several pieces of the banana bread which she put in her purse, insisting that I should take some home with me because even though I might be too excited to eat now, I would be hungry later. She wrapped an extra two slices in paper napkins, and attempted to force them into my purse. I demurred.

It’s amazing what you can remember once you start. And what you don’t remember (dates of publications, the wording of reviews) you can easily Google.

I didn’t have many copies of WIND ROSE. One of the few turned out to be a “room copy” from the old inn days, at Dairy Hollow House. This was a country inn and restaurant  I owned and ran with my late husband, Ned Shank, from 1979 to 1998. Another deeply engrossing incarnation.   I could tell this by the little handwritten label on it: had to take off my glasses and squint to make out the tiny, faded handwriting (mine): 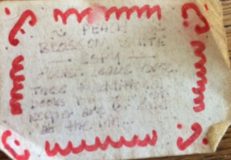 — copy —
Please leave here.
These and additional
books by your innkeeper
are for sale at the inn.

I  gazed  at this little label for a long time. The person I was when I wrote it was an innkeeper and a writer. She was wife to a living husband, whom she adored. She was the daughter of two living parents, who she also adored, if more ambivalently. She had lived in the same town since she was 18 years old.

The only one of these things still true is that I am still a writer. But how the infrastructure of being a writer has changed! Publishing, the old school genteel business I grew up in and around and worked in for decades, is in its death throes. Perhaps these are the birth pangs of whatever will shake out as its replacement, for surely, in one way or another, something will: people will always need to tell, listen to, and read stories.

As Garrison Keillor said, “You get old and you realize there are no answers, only stories.”

It is hard, if not impossible, not to be elegiac at this phase of life.

So I looked at WIND ROSE this morning, for perhaps the first time in at least two decades.

I looked at my then-bio on the back cover flap. It dated from from before Ned and I  met. It said, of me, “She cooks, both professionally and for friends; practices yoga; and works on her garden and house.” Well, that part, at least, was still mostly true.

I looked at the black-and-white photograph, which I remembered vividly: it was taken on my first trip to New Orleans, after my first meal of crawfish (I was not yet vegetarian).  To which I was taken by Michael Stark, a lovely kind funny man, a gay mask-maker who always wore a caftan, another friend who now resides permanently on the other side of  this life.

I remember that jacket I was wearing in the picture: white cotton, with cobalt-blue checks.

I opened WIND ROSE, and saw I had dedicated it to my mother. 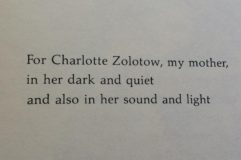 Her body is now ash — you don’t get much more dark and quiet than that.

I am her literary executor. I continue to work on her books — reissues, updates, foreign rights. When there are changes to be made, I try to channel her, ask myself what she would want, what principles she wrote and edited by that pertain.

And thus, through her work, our work together, in a sense she remains “in her sound and light.” Doesn’t she?

With that thought I closed the book. Enough. I did not read further. Not today.

Look, I love my life now, at 63. I live in Vermont. I write. I remain sexually and emotionally active, and am two years into what I suspect is the last great romance of my life. My health is holding up nicely. I swim, lift weights, walk, do yoga (albeit the class called “Gentle Yoga”). I am passionately engaged with life’s party, and frequently bring a dish.  It’s just very much not the life I thought I would have, back when I was in my 20’s, 30’s, 40’s. (Is anyone’s? I don’t know. I suspect not. But I also suspect my own case is a bit extreme).

My late father , Maurice Zolotow, a fellow writer, once told me, this would have been when I was in my early 30’s and he would have been about the age I am now, “My God, Cres! The life you’ve lived! You could spent the rest of it in a nunnery and you would still have plenty of material!”

What a writerly way to look at it that is. And I must say, he said it not without admiration, and maybe a little envy.

“You must write your memoir.” People have been saying this to me since I was in my 20’s. Only, which one do I write?

WIND ROSE. I looked at that book, with its little peeling-off label, like an outdated passport bearing the stamp of countries you visited long ago.

Up floated the words of the poet William Matthews, with whom I once had a brief fling, long before I was married. (It must be said: he was a much better poet than a fling-er). He is another one who has vanished to the other side Like my parents, my husband, Michael Stark, my Aunt Dot. All of them with no known forwarding address and impossibly lousy cell coverage.

This, from Bill Matthew’s poem “Bucket’s Got a Hole in It”:

Don’t double-click on the Save icon
until you’ve thought how much a fossil fuel
has to forget fossil to become fuel,
or how much childhood we plow under.
Tears… they’ve
got their work cut out of them, the way
a river might imagine a canyon.

I peeled the yellowed label from WIND ROSE, slipped the book in its addressed Priority Mail envelope, carried the package to the car.

I will mail it when I go out today, to my Gentle Yoga class. 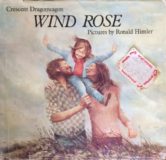