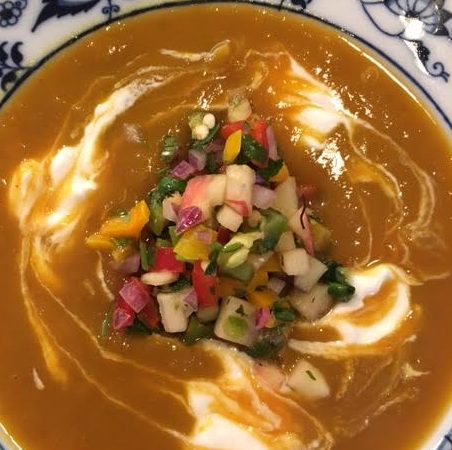 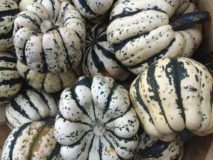 Instead of the zucchinis, the excess of which we may have complained about only six weeks ago, we now coo over adorable gourds and mini-squashes, admire big honkin’ pumpkins and sweet, bright creased or crook-necked winter squashes.  So pleasing aesthetically, sculptural, decorative, signal of the season.

And then! Beneath those exteriors — dappled, splashed, freckled and striped in countless hues — dense-textured, sweet golden flesh, each variety in clear kinship with the other but distinctive. They’re as different collectively from the summer squashes as summer itself is from winter, and cooking with them is its own delight.

I fix them many ways, sauteing them on their own (I particularly love delicatas for that) and roasting them, serving them over pasta (with garlic and parm and sea salt and black pepper), as a side, or even in salads. But with the larger varieties especially, soup is my go-to.

In the summer, I make  and eat a very different cucumber-mint soup. But once winter squashes and cooler weather arrive, I switch. I  can’t even guess how many pots and varieties of pumpkin/butternut/Kabocha/ delicata squash soup I have made over the years, and how many different varieties of squash (sometimes bolstered with a yam or sweet potato, for additional heft) I have made them from.

I do know that every one of those squash soups has been a little different.

Last-of-summer tomato soup. Back in the Dairy Hollow House days, a ray of sunlight fell in my kitchen window one autumn afternoon, landing on a wooden bowl in which rested a few such tomatoes, and a butternut squash, Thus was born this unlikely but so good combo. Unlikely but true story! Recipes don’t usually arrive this way!

Sometimes I go on the sweet side, that being winter squash’s natural predilection, perhaps cooking an apple or two with the squash, sometimes a pear. But the trick is to keep the soup’s axis sweet-savory, not sweet-pumpkin-pie/dessert-ish. Sometimes I balance this inherent sweetness with a little tartness, as in the Pumpkin-Tomato Bisque I often served at Dairy Hollow House, the inn my late husband and I owned and ran back in the long-ago-far-away days.  (Here is the version of  I used to make then… it was featured on Good Morning America, and is in my books Passionate Vegetarian and Dairy Hollow House Soup & Bread). At other times, the sweet-savory balance is created by use of a good flavorful vegetable stock, and/or loads of slowly sauteed diced onion and garlic. Though I mostly cook the squashes for such soup in liquid, on the stovetop, occasional I use roasted squash as a base too.

The panoply of possible winter squash soups is infinite.

To cream or not to cream

The French way is to add cream, playing up the sweet aspect, rather than bouncing off it with acidity or spice. And yes, cream always makes things taste voluptuous.

When I’ve been in France in the fall, I’ve had soups that were little more than pureed pumpkin and cream, with a little salt, and served with a nubbin of butter melting on the top. Simple? Sure. Elegant? Arguably. Were they good? Yes, no, maybe… let’s say they were not exactly my thing. You’d have to define “good” a little differently than I do to truly love such a soup. I can’t conscionably justify ingesting much that is so densely caloric on a regular basis. When I do use heavy cream, I’d rather save it for something where only cream will do  (a shortcake with whipped cream, for instance). But for me, soup is daily food, at least one meal most days. And given that the texture of pureed butternuts and like squashes is so beautifully creamy when pureed, cream really isn’t needed. Why on earth not just let the squash be itself?

Cream seems like pandering to our “fat tooth” (I think we have one, not only a sweet tooth; thank evolutionary biology for that). Add sugar, add fat, especially butter and cream,  and anything is going to taste better at first bite; we’re wired that way.

But if you rely on cream or sugar/maple syrup/honey, you don’t get the essential nature of the ingredient being creamed or sweetened — you not only amp up the calories, you are cheated of the full palette of flavors. Being conscious about nourishment and what I put in my body, I long for foods that are high-nutrient, lower calorie. But just as important, being a sensual cook, I also want to bring the ingredient out, make it whisper its unique secrets. Cream, especially a lot of it, leaves those secrets and flavors latent.

And the flavor of winter squash is so good.

Comfort me with apples… and aromatics

Back to relatively straight-up winter squashes, then, bless them, and the wondrous varieties of soups that can be made from them. Quite often I puree a big knob of peeled ginger root, rough chopped,  in with the cooked squash, with or without some garlic., with or without added apples or pear. Quite often I do curried versions, or , in recent years, a Thai red-curried winter squash soup (with a tiny bit of coconut cream) and a shower of cilantro on top. In addition to purees, chunks of winter squash floating in a thinner, brothy squash puree, are also sometimes pleasing (and this is leaving aside the soups where squash is an ensemble player, not the main ingredient) .

But a long time fave is curried winter squash and apple soup. Its heat (ginger, green chile, in addition to curry spices, added to the squash puree, the whole cooked together) bounces off the sweet of the squash and apples so very nicely; really, it couldn’t be more perfect.

Big chunks of kabocha squash share the pressure cooker with sliced macintosh apple and vegetable stock. You could also cook them conventionally, cut in smaller pieces; it just takes a little longer.

I do, having spent about one month every year in India for much of my youngish adult life. And having, before that, been married to the proverbial long tall Texan (tears rolled down my face the first time he made me chili; it was that hot. To my own surprise, I acclimated).

But not everyone does acclimate. Some just don’t like hot food, and some, who once liked it, discover as they age they just can’t eat it any more (how I pray this does not happen to me).

The first of this fall’s squash soups I made, it happened, was for a writing group I facilitate. I knew one of our members, having endured a brutal go-round with chemotherapy, was desperately sensitive to chile-heat. Even a heat so mild as to be nearly undetectable to me (a true heat-head) was excruciating to her. And I knew another member just flat-out does not eat anything sweetened with sugar or even its generally-thought-to-be-healthier ingredient synonyms: honey, maple syrup. She will, however, consume foods sweetened with concentrated fruit juice.

But then, there were those other group members who did enjoy the culinary wilder shores.

Now I know some of you are rolling your eyes at this, but to me, part of loving other people and  cooking for them is to do so well and in a way that nourishes and pleases them. And I like the creativity involved in working within limitations — I like writing sonnets and haiku, not always free verse — and I like to make people happy. I think when you cook, if you cook for others, part of the responsibility and joy is to know their likes and dislikes, preferences, allergies, needs.

After all, we literally serve those for whom we prepare food.

So squash and apples went in the pressure cooker with a little homemade vegetable stock. After it was cooked, I puréed it, skin and all, in the processor (I used to peel it, in the inn days… now I don’t bother).

Then, I butter-sauteed 2 or 3 onions, adding in the last few minutes a finely diced apple. I stirred this into the puree, for additional flavor and texture. Then, more well-flavored vegetable stock, and quite a bit of thawed frozen apple juice concentrate, undiluted. A little salt.

That meant my two careful eaters could enjoy the soup with impunity.

But for the rest of us, I made an improvised east-west salsa. In addition to the diced onion, diced hot and sweet red and green peppers, squirt of lemon or lime juice, minced cilantro and touch of salt you’d expect, I added the following (and listen up, because this is key): a lot of very finely grated fresh ginger, and a finely diced crisp local apple.

This is what I mean about limitations being a good thing: when you work within them, you get inventive. This precise salsa was a first. It was pretty, and it was good. The little grating of fresh ginger, raw instead of cooked with puree the way I always had done it if I was using ginger, was what really woke it up. The apple added crispness, sweetness, unexpectedness.

I served the on the side, along with yogurt, along with a warning (“That salsa is really hot!”). Diners could dollop or swirl these options — the one hot enough to take the top of your head off, the other unctuous and soothing,with its mild tartness supplying a  soupcon of pucker. Or they could forgo them. The tawny potage was happy either way, its plush flavor and tawny color so perfectly seasonable.

More to the point, everyone eating was happy.

And the caramelized onion and feta tart in puff pastry brought by yet another class member was the perfect accompaniment.

Because I once owned a restaurant and never learned to cook in small batches, of course I had leftovers.

And the night after our Poetluck, they were #DinnerwithDragonwagon. Fortunately, there was salsa left over, too.

Fall. It comes once a year, of course. But it’s never exactly the same.

Nor are any of us, one year to the next. Life is change, and I hope, always, to enter into that change with grace, verve, curiosity,  and a lack of resistance. Experimenting.

Right down to the soup.

So pucker up, butternut.

I lit a fire in the fireplace, and carried my bowl into the living-room, and dined, solo, beside it.

Of such small, actual happinesses — with others, or in solitude — is a good life made. 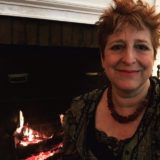