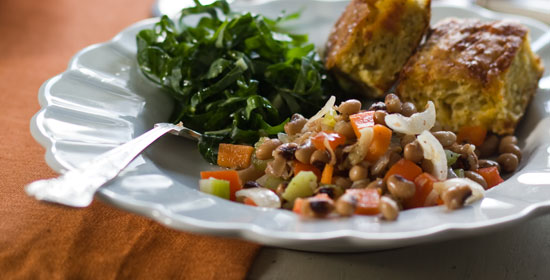 HAVE YOU PURCHASED YOUR BLACK-EYED PEAS YET?

DO YOU, PERHAPS, EVEN HAVE ‘EM SOAKING? (EITHER BECAUSE YOU LIKE TO DO THINGS A LITTLE AHEAD, OR BECAUSE YOU KNOW THAT THE LONGER INGREDIENTS IN ALMOST ANY KIND OF STEW-Y DISH CO-MINGLE, THE BETTER THE FLAVOR?)

HOWEVER… HERE IS A CROCKPOT VERSION OF AN EXCELLENT BLACK-EYED PEA RECIPE, WHICH YOU CAN EVEN START THE NIGHT BEFORE (ON NEW YEAR’S EVE!), WITHOUT SOAKING.

BUT WHEN IT COMES TO BLACK-EYES — IF YOU DON’T HAVE ‘EM GOING NOT, WHY NOT?

LOOK AT THE CALENDAR!

Time for my annual re-post of what I consider a couple of the BEST ways to eat your black-eyed peas for New Years’ Day.

What? Don’t tell me you didn’t know you really must eat black-eyes on New Year’s Day!

Well, you just must. Period. And that’s that. Everybody knows that.

You say, well, you didn’t know? You ask, why should you eat black-eyes on New Year’s Day? Well, to insure good luck for the coming year, of course.

And if you didn’t know until just now, well, now you do.  Yes, of course we make our own luck in this world, but a little assist now and then is helpful.

Seriously, I’m always fascinated by food as a window into human hopes, fears, aspirations, and customs. So, I have offhandedly been exploring, for years, the traditional dishes said to bring luck.

Such foods are most often are served on whatever a particular culture observes as the start of a new year.  If you look at these dishes, you can also get a good idea of what human beings equate luck with. (Money is a major contender, but by no means the only one. Health, longevity, and general sweetness, also figure).

Now. if you knew about black-eyed peas before I told you, you may be used to them most frequently cooked with ham hocks, as in Hoppin’ John, the traditional black-eyes and rice dish in many parts of the South.

But the world’s cultures have cooperated in providing us with many other such dishes, made with established (though, okay, not proven) lucky ingredients for the various New Years celebrated around the globe.

Much as I like Hoppin’ John (though my own version of it is vegetarian),  it would be a pity not to look a little more deeply at the what and why of fortunate foods, and to try some of the more exotic offerings. Many of which are purely delicious.

Check these basic components, then make your menu therefrom.

Beans and lentils: from ancient Rome’s lentils to the American South’s black-eyed peas, legumes are considered auspicious in many times and places. Some cultures hold that each bean represents a coin, bringing wealth. Others see the bean as a seed (which, of course, it is), reminding the eater of new life and new beginnings. 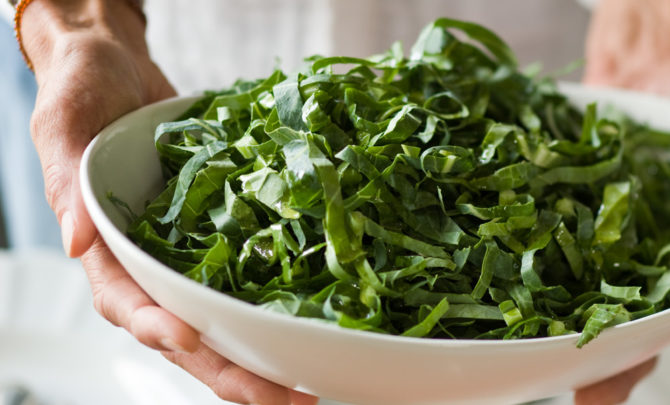 Greens: Leafy cooking greens — collards, kale, turnip, spinach, cabbage — are also associated with wealth, in this case folding paper money. Although cultures other than American make this symbolic link, it’s particularly strong in the U.S. where, of course, our folding money is green.

Golden foods: go to a Chinese New Year’s celebration and you’ll see pyramidal stacks of oranges and pomelos (a large round greenish-yellow citrus fruit, which looks like a large grapefruit). Gold: need we say, again, symbolizes wealth? In some parts of America, the gold theme is carried out in our native bread: cornbread (bake it in a skillet, and you get double-lucky; because it becomes a round food, see below, too).

Long noodles: this one is Chinese and only Chinese. The long noodle promises long life. Thing is, you need to slurp it, unbroken, into your mouth. Cutting it could be dangerous to your longevity.

Pork and Fat: Think “high on the hog” and “fat of the land” and you’ll get the connection. Often, in the American South, a ham hock or ham bone is thrown in to simmer with the beans, greens, or both. Vegetarians and non-pork eating populations spin off with other fat foods: butter or ghee, olive oil, coconut fat, or fried foods in general.

Fish: Because they swim only one way, forward, not backward. Though it has been decades since I have eaten fish, I must say I find this a beautiful symbol, rich in psychological and spiritual truth.

Sweet foods: at the Jewish New Year, honeyed foods usher in a sweet year: usually there’s honey cake, and/or apple slices dipped in honey. In Spain, eating one grape per chime of the clock at midnight on New Years Eve does likewise. In parts of Italy, a round almond-filled snake-shaped cake is eaten, promising a sweet year, and one in which the less desirable parts of the past may be sloughed off as the snake sheds its skin (this pastry might be particularly appropriate at the changing of the guard between 2017 and 2018). 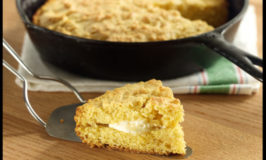 Round foods: Beans, the citruses, cornbread baked in a skillet, and many of the traditionally lucky sweets are round. Which brings us to what may be (along with the forward-going, be-here-now fish) the most powerful symbol of all: like the circular wedding ring, roundness speaks of eternity, of the cycle of life, and how what goes around comes around.

(Cornbread, pictured right, has got to be especially lucky, when prepared in a skillet… it’s both round and golden).

I always prepare dishes with ingredients in most of these categories at New Year’s. But, because I’m a traditionalist only up to a point, more often I’ve riffed off of them, coming up with my own iterations, to my own taste.

One of my favorite black-eyed dishes hails from Tanzania: a Curried Black-Eyed Pea & Coconut Soup, spicy-gingery, creamy by way of coconut milk… and, with the turns-out-o-be-delectable surprise garnish with fresh banana or crispy banana chips. And the lovely and cogent food editor Addie Broyles did it the honor of featuring it one year in her column in the Austin-American Statesman, so I’m sending you there to take a gander.

Or consider my Spicy-Smoky East-West Black-Eyed Peas.  These are ALSO just lovely. Improbable though this combination may sound, the odd-ish-seeming ingredients, are packed with umami savor. I promise, you and those you are feeding will swoon over it.

Serve it with cornbread baked in a skillet, and some form of greens, and a round golden cake for dessert (I like an orange bundt cake, with sectioned assorted citruses on the side) and you have a simple, inexpensive, and very, very lucky meal.

Both the Curried Black-Eyed Pea Soup Addie wrote about and the recipe I’m about to give you are from my book Bean by Bean.

These black-eyes, untraditionally, don’t have ham or bacon in them. What makes them smoky? A mixture of chipotle peppers and toasted sesame

oil. Miso, a fermented soybean paste, is available at natural foods supermarkets (in the refrigerator case) and Asian groceries; it and the sesame are what add the “East” to these delectable beans. Like so many fermented foods,  the miso adds a nice savory umani wallop.

Although bean dishes in general are a great do-ahead and freeze beautifully, and this is certainly no exception, a slow-cooker (with a 6 quart capacity) makes these a snap to prepare, largely the night before. And of course, the slow cooker acts as a self-contained warmth-keeping serving dish, thereby (if you are entertaining) making things easy on the host.

So, I’ve done this recipe with crock-pot preparation, but it’s easily converted to Instapot or stove-top, of course.

1. Last thing before you go to bed on New Year’s Eve, rinse the black-eyed peas well and place them in the slow-cooker with enough water to cover them by about three inches. Add the two whole garlic cloves, the dried chipotle, and the quartered onion. Set the cooker to High, cover, and go to bed.

3. Stir the vegetable sauté, with the sesame oil, and miso, into the simmering, now-tender black-eyes. Fish out the dried chipotle piece and discard it, and stir the beans very well to distribute the miso and sesame oil. If you like, scoop out ¾ of a cup or so of the beans and mash them, then add them back to the cooker, thickening the beans. Or, if you feel the beans are too thick, add a cup or two of water or stock. Add salt (beans need quite a bit) and pepper to taste. Turn the heat to Medium, and continue simmering the beans at least one hour. Your guests will arrive to delicious cooking fragrance and even more delicious beans.

The illustration at the top is of the East-West Black-Eyes, with a side of cornbread and some collard green salad. The photograph, by Mark Boughton, appeared in Relish Magazine and was styled by Teresa Blackburn, as are two other pictures here, of collard greens and cornbread, which accompany this piece.

Both recipes in this story are from “Bean By Bean: A Cookbook: More than 175 Recipes for Fresh Beans, Dried Beans, Cool Beans, Hot Beans, Savory Beans, Even Sweet Beans!” (Workman, $17.95)