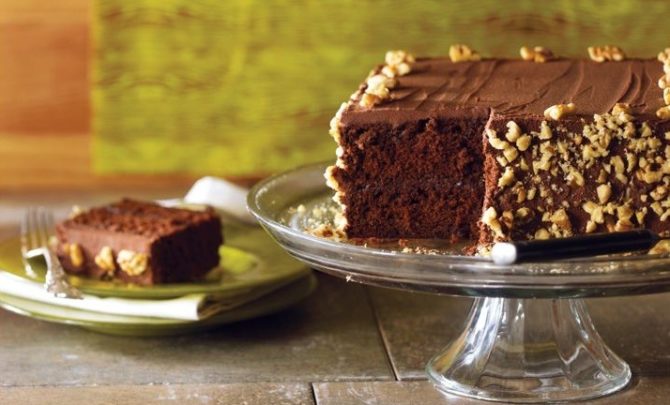 IT’S ALMOST ST. PATRICK’S DAY, SO IT IS TIME FOR ME, AGAIN, TO OFFER YOU THIS GUINNESS STOUT CHOCOLATE LAYER CAKE.

IF YOU’VE BEEN LOOKING FOR AN IRISH-ISH DESSERT THAT IS A KNOCK-YOUR-SOCKS-OFF WOW, THIS MAY IS IT. IT IS (SHE SAID MODESTLY), ONE OF THE THREE BEST CHOCOLATE DESSERTS I EVER CAME UP WITH, IN A LIFETIME OF DEVELOPING CHOCOLATE DESSERTS.

My then-husband (now late husband) and I exchanged looks. Across the surreality, at least one minor mystery was solved: that empty wooden cake box, the name of its high-end bakery painted in gold-leaf atop it — – what, we had wondered, was it doing sitting near the front door of my father’s Los Angeles apartment? Where had it come from? 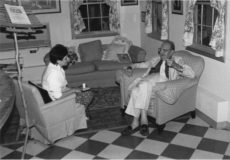 His favorite dessert at the inn was a densely chocolate-y voluptuous bread pudding, served dolloped with softly whipped, barely sweetened cream and a squiggle of raspberry sauce.

The night I first brought it out to him from the kitchen, he removed his glasses, so he could examine it closely. Then he dove his spoon into it and sailed it into his mouth. His eyes closed in bliss as he rolled its velvety custard on his tongue. He swallowed. He opened his eyes, said, “Wow,” and took a second bite. After that, glasses still off, he gazed up at me from the banquette, his pale blue eyes large. “Cres,” he said sincerely, “On a scale of one to ten, I give this five thousand.”

The night he arrived in Dublin, he said, he’d left his hotel, gone to the nearest pub, and eagerly ordered one. “It was bitter,” he said on the tape, his voice still crackling with life and enthusiasm, though he himself had vanished from this world. “And warm. At room temperature. I said to the bartender, ‘It’s bitter!’ and he said, ‘Sure, and it’s supposed to be.’ ”

Maurice spoke about how he thought at first he’d been too good for AA. “At one meeting I mentioned James Joyce. Someone came up to me after the meeting and said, ‘Yeah, Jimmy Joyce, I know him, lives in the Valley, works a good program!’ Can you imagine? I was such a terrible snob… yet though this same program I thought I was so superior to, I met someone who introduced me to Fionnula Flanagan, the actress. Who played Nellie Bly in Joyce’s Women! So that shows you what I knew.”

Time flew by, as in the old black-and- white movie convention of calendar pages blowing away.

But I can do so only in my dreams.

Though I know, through the bread pudding and that empty wooden cake-box, how much he would have appreciated it. And I like thinking about that, for imagination’s table is always set and anyone can sit down and partake, even Mark and Maurice, who never met in this world.

This — story, and context, and those who have gone before us and are no more except in memory, and those we do not know yet — this part of the depth I mean when I talk about what I call “deep feast.”

“Fionnula,” I told her back in 1991, “We found the box from that cake you sent him home with. There wasn’t a crumb left.” 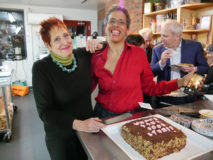 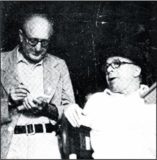