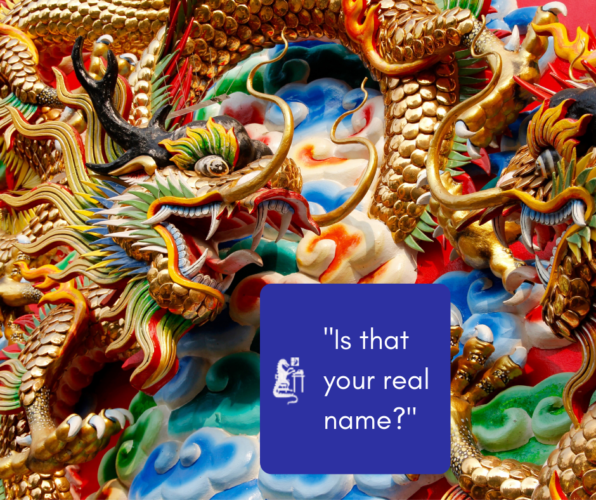 “Many people do dumb things in their teenage years, but most have the sense not to cast them in concrete, which they then have to drag around for the rest of their lives…

“At sixteen, I got married for the first time. My then-husband-to-be and I thought that the woman should not take the man’s last name, so we decided to choose a new last name.

“As I recall, somewhere in there we looked at one of those ‘One Thousand Names for the Baby’ books, and discovered that our old first names had meanings we did not agree with (it was the late sixties, we did not agree with much). (This picture was taken maybe a year before I met Crispin. Way too young to make a lifelong decision — self-understanding and identity are at least as blurry as this photo.)

“The wedding drew nearer. We still hadn’t come up with a new last name. One day, after trying and discarding several possibilities, I said, ‘Maybe we’re taking ourselves too seriously, maybe we should pick something completely frivolous.’ He said, ‘Like what?’ I said, ‘Oh, um, uh, like Dragonwagon.’

“Thus we became Crescent and Crispin Dragonwagon. If I had had any idea how many countless thousands of times I would have to explain this ridiculous name, I would have chosen something a lot less flashy. But by the time I realized how long the

remainder of my days might be,  and that I’d be pulling it around like a ball and chain, I already had a couple of books out and the start of a professional reputation. (This little dragon, working industriously away at a typewriter — remember typewriters? — has been my logo since, let’s see, about 1978. I still like it. The name has grown really old, so beyond old, for me… but I still like this dragon.)

“But, I will say ill say it’s a great children’s book name; kids love saying it. Plus, I enjoy seeing how various mailing-list computers maim it. For instance, I’ve gotten letters from credit card companies and charities beginning, ‘Dear Mr. Wagon,’ and solicitations addressed to Dr. Agonwagon. I’m just so tired of being asked about it, or being typecast as ‘Enh, took too much acid in the ’60’s.’ (The flattering variation: “Were your parents hippies?” As I sometimes say, now that I am in my sixth decade. “You don’t look that old” is the new, “Have you lost some weight?”)

“Of course, I certainly can’t blame anyone for saying “Hunh?” when they first hear it, or asking me how I got this name, though I could very happily never ever tell the whole dumb story again as long as I live. I also can’t blame anyone but myself when people, understandably but regrettably, hear the danged name and write me off as a flake, at least until they get to know me.

“More seriously: there’s also this: decisions you make early in your life look different as you mature. These days I think that at that point when I changed my name, another strong factor was that I did not want to get by on my parents’ credit or identity . I was a writer; they were both writers, and semi-famous ones.

“Looking back now, I think I must’ve felt that if I used their name, I was using their reputations and identities, instead of forming one of my own. At that age, it’s essential to make a marked break from your parents in some way. So I do respect the

pig-headedness and idealism of my sixteen-year-old self, even while I am exasperated with her… because now I also sometimes think, wasn’t being a professional freelance writer hard enough, did you have to make it harder on yourself? ” (Here’s an older and hopefully wiser Dragon, in 2010.)

“But the truth is, once people know me, they don’t even notice my weird name anymore.

“By the way, Crispin and I divorced many years ago, in 1973. In 1978 I wed Ned Shank, to whom I remained happily, passionately, and interestingly married for 23 years, until his sudden death on November 30, 2000 (He was out bicycling and was hit by a car). 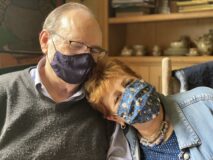 Mark and me, masked up at our home in Fayetteville.

“In 2019, 19 years after Ned’s death, I remarried. Mark Graff and I have been together since 2014. We now live in Fayetteville, Arkansas, quite happily, with a tabby cat named Felani.

“What happened then? What’s happening now? Oh, always something… My blogs and Facebook posts will more or less keep you up to date.

But as one of the the blog’s titles indicates, I think none of it — losing Ned so terribly, and even yes, way earlier, choosing such a ridiculous name when I was a baby radical — none of it has been wasted on me as a writer. ”