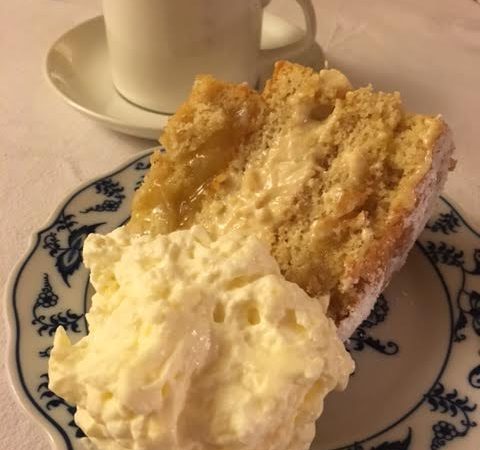 Last week I was obsessing about birthday cake.

One particular birthday cake … a cake worthy of two twins celebrating their shared 65th birthday, which I had tasked myself with making. After all, one twin was my beloved Alpha Male, and the other was his sister, who I’d never met, who was flying all the way in from Washington state to celebrate with him. Didn’t this — plus the fact that his 18-year-old son, soon to go off to his first year of college, would also be attending, plus two other friends — call for something as spectacular as I could imagine?

The birthday twins both were big key lime pie devotees. Pie is proverbially easy, and key lime, with its graham cracker crust and pseudo-custard filling, astonishingly so.

But for a transcontinental birthday celebrating a conjoined 130 years of life experience? Such a pie did not seem festive enough. More pomp was called for.

I wanted a cake that, light though it might be, had gravitas.

It should be said that while I adore fancy baking, I don’t do it much these days. It does not fit my current life (much solo time, and one person alone with a layer cake just does not make sense) or the way I mostly eat (very little sugar or white flour).

Still… I love the act of putting big-deal cakes together. It just makes me happy. As I wrote in a poem for children, years ago:

You put it in wet
It comes out cake
That is why
I like to bake.

This theoretical birthday cake was no exception, but for the fact that in this case, I’d had company for two weeks (loved every person and every minute, but it was a bit draining for my introvert self). But when I had the chance I would buy plain sponge cake bases online to save time so I have some much needed me time.

And, too, there was the rest of the birthday dinner to be thought about and made.

Usually I would have prepped much in advance, but due to company and writing work, this was not going to be the case.

Usually I would have designed everything in on the meal on the principle of everyone’s favorite dishes and my own preferences and some nod to health and the non-duplication of flavors and colors — but my guests included a teenager who did not eat vegetables (the mainstay of my own way of eating),  plus four out of the six of us did not do spicy… just a little more complex than usual. Two vegetarians, four carnivores willing to eat vegetarian.

I whinged about most of this, especially the cake, on Facebook, which I have found to be THE medium for obsessing aloud about culinary matters, because dozens of cooks and eaters will cheerfully weigh in.

As they did for me on the theoretical key lime pie cake.

“I’m thinking,” I wrote, after explaining the circumstances, ” of  thin layers of either sponge cake or 1-2-3-4 cake, maybe the cake pan not greased-and-floured but greased-and-graham-cracker-crumbed… sandwiched with lemon curd. Maybe brush the sponge with limoncello? I’m thinking thick middle layer of, in essence, key lime pie filling, maybe set a little more firmly than usual but with agar rather than gelatin (his sis and I are both v).

“Will it hold together? ” I wondered. ” Will it be showy and glorious? Frosting seems like overkill, but is powdered sugar too meh?”

Rachel Montgomery West, who recently prepared a recipe a day of mine from Passionate Vegetarian, and documented her hundred days of exploration on Instagram and Facebook, said, “A sturdy citrus glaze might both stick and soak in. Yum,” to which Fearless Writing alum and “pan pal” Nora Narum chimed in with, “Sturdy citrus glaze = the one from the orange muffins in DHH Soup & Bread. With whatever citrus seems appropriate.”

Causing me to remember that glaze, from my Dairy Hollow innkeeping days, when we made many gorgeous breakfasts, which sometimes included those orange muffins.

And to think, “Oooh, yeah, those were good.” Ou sont les gateaux d’antans? But no time to wander down my own culinary Memory Lane. I had the key lime pie cake to think about. Bake here now, CD!

Sara Chamberlin, another writer/Fearless alum, also remembered a cake from her past — and she encouraged me: “Used to make a 1-2-3-4 cake with lemon curd between the layers & vanilla buttercream frosting or . . . same cake with caramel frosting (made from caramelized sugar, not candy) which was my go-to birthday request as a kid. Only thing I like better: key lime pie. Go forth and create, my Dragon!”

Kathleen Everett said, “Icing – always icing! Maybe with a bit of zest? ” Well, yeah… but since i don’t eat much sugar these days, it was just kind of mounting up as I mentally tasted this potential creation… But, I could really see the point of Dorothy Cardona Kinne: “It sounds delicious and screams for meringue or marshmallow frosting…” Though marshmallows were out (not vegetarian), meringue frosting sounded superb. I never met a meringue iteration I didn’t like, especially with lemon or lime. But the day was forecast to be too humid for certainty in whipping egg whites stiff.

And then there was the concept of my restaurant reviewer friend and and Saturday member Karen Deyle Miller: “How about a not quite glaze not quite frosting but more like a skim coat of icing. Then just before serving sprinkle with a tricolor of citrus zests – orange, lime and lemon. If you could get a hold of a handful of kumquats you could slice and candy them and balance a few rings in the center….or around the edge…”

Marty Cogan, a fine pro baker who lives in my former home town, suggested a revamp of the whole concept: “A key lime simple loaf cake, dusted with icing sugar & served with fresh raspberries … and a dollop of Chobani blended key lime Greek style yoghurt.” Loved this idea itself, but felt  a round, high, showy layer cake was what the occasion called for. It was just more iconically birthday-ish.

And Judith Robinson Levine, my baking cohort and friend from Fayetteville, Arkansas, reminded me to “… freeze the layers and frost them frozen… use a very finely serrated knife to cut…but you know all that.”

I did, but it had been so long since I’d done serious layer-cake baking I had semi-forgotten.

I finally settled on an idea from Becky Lilywhite, with whom I’ve worked as a writing mentor for years: “lemon (or lime) curd and mascarpone cheese. Let it sit for several hours. It’s my go-to for summer. ” My actress/children’s book writer/ Fearless Writing compadre Monica Clark-Robinson concurred with this idea.

Then it was time to bite the bullet, send some of the troops shopping (very detailed list), and drag out my faithful KitchenAid and the microplane (there would be a whole lotta lime-grating goin’ on).

What I wound up doing was the following, more or less as I had sketched out on Facebook:

O  I baked 2 layers (a double-recipe) of beautiful classic hot water sponge cake (I used the late Richard Sax’s recipe in Classic Home Desserts, my hands-down favorite and most frequently used cookbook for sweets. and I did not use the graham cracker crumbs, though I still think they’re a cool idea).

O   I half-froze the 2 sponge cakes and split them horizontally, making 4 layers.

O   I brushed each layer on its cut side with limoncello. 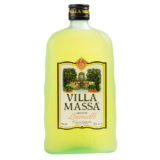 O   I sandwiched each pair of spongecake layers with lemon curd (and, having some regard for my own sanity and the shortness of time, I confess I used commercial lemon curd instead of making my own… I believe this is called maturity. Time was when I would not have done such a thing).

O    I made a batch of classic key lime pie filling (condensed milk; lime juice, lime rind), with softened neufchatel whipped into it, along with some agar (vegetarian gelatin) softened in the lime juice, so that the concoction would (I hoped) set a little more firmly than usual. But not so firm it was rubbery.

O    I transferred the filling to set up in one of the same 9-inch round cake pans that I had used for the cakes.

Meanwhile, I received a text from the shoppers. No mascarpone. I texted back, “Heavy whipping cream instead pls.”

My first culinary mentor, Miss Kay, first baked sponge cake with me and taught me how, when it was ready, “The cake will start talking to you.” Hearing the soft crackle omitted by the sponge layers when I took them out, I thought, “Thank you, Miss Kay.”

Meanwhile, in and around the sponge cakes baking and the ingredients being shopped for, I marinated summer green beans and yellow beans in mustard-dill vinaigrette, made my famous BBQ tofu, made a big honkin’ dish of macaroni and cheese (favorite of the 18 year old) and began slow-cooking okra until caramelized in a kind of jam of garlic and tomatoes. Oh, and the carrots marinated in the cilantro-honey vinaigrette…

And finally, I layered and stacked.

Key lime pie filling (holding my breath as I reversed it out onto the layers).

Dusting of powdered sugar sifted on top, meh or not.

Strawberries, blueberries, blackberries around the edges.

White candles — just five, for no reason except it looked good to me, and 65 just seemed like overkill.

And it was delicious.

Though it made me not want to eat sweets again for a good long time. Much to my surprise, aging seems to have dimmed my voracious sweet tooth, though it’s made me crave fat even more: olive oil, butter, coconut oil…

I enjoyed my own cake, too, every bite. But. No sweets until my own birthday, I decided, coming up in late November.