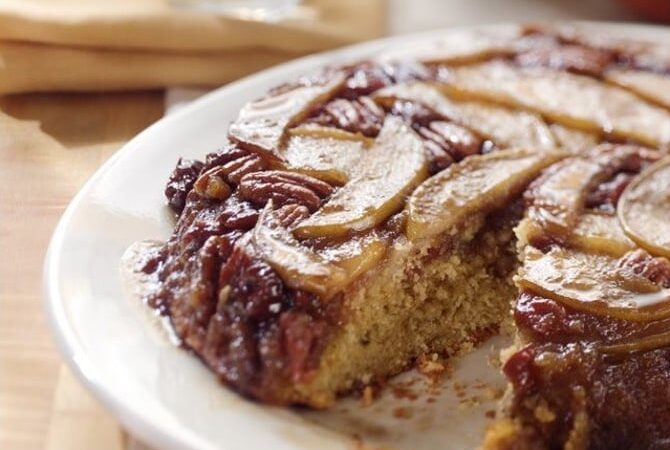 To dessert-lovers, a good cake has no down side. Unless, of course, it happens to be an upside-down cake. 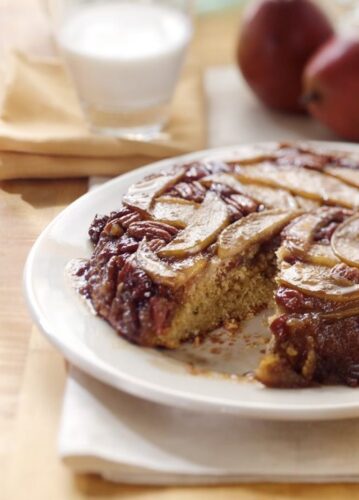 These minor miracles of topsy-turviness start with a layer of fruit (most often canned pineapple) in a sweet, syrupy, buttery glaze in the bottom of a heavy pan or skillet. Over this, a good cake batter is poured. After baking, in a culinary sleight of hand, the whole shebang is reversed out onto a serving plate, the fruit underneath now a gloriously attractive and gooey topping.

Most of us think of upside-down cake as old-fashioned, but it goes back only to the early 20th century. No one knows for sure how and when in originated, but a 1924 Seattle fund-raising cookbook seems to mark its first published appearance. This was followed by a version in a 1925 Gold Medal Flour ad, another in a 1931 government pamphlet, and finally one in a 1936 Sears Roebuck catalog. Thus, it became a fixed star in the firmament of American home baking.

Upside-down technique existed prior to this in an apocryphal French apple pie, created in 1889 by two sisters, Stephanie and Caroline Tatin, innkeepers in the Loire Valley. During the busy hunting season, one sister left a pan of apples and sugar on the stove cooking a bit too long. Instead of merely softening, the sugar caramelized and the apples braised in this caramel. With no time to think, Stephanie cleverly popped a pastry crust on it, baked the whole thing, turned it out and served it.

Whether happy accident or intentional invention, the cake that doesn’t know which side is up is perfect for April Fools Day. And with fresh pears, dried cherries, pecans and maple syrup, this ultra-moist, rich upside-down cake may well be the best you’ve ever had. Some serve it with ice cream or whipped cream, but this really isn’t needed. A glass of cold milk, however, is a welcome accompaniment. The cake is especially delicious when still slightly warm.

This recipe of mine originally appeared in Relish Magazine.

Did you enjoy this recipe? Did you make it? Please leave a comment below!