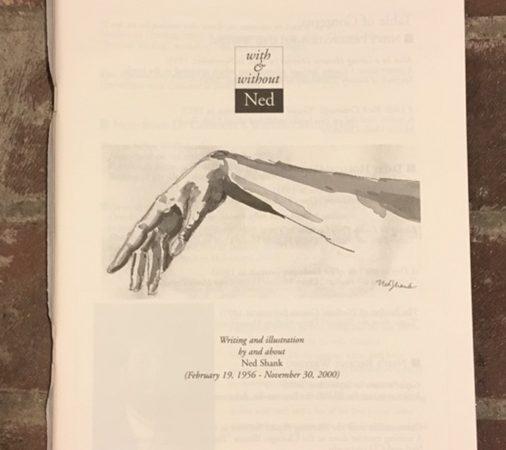 I look back, seventeen years as I write this since I joined, absolutely against my will… so much against my will that when the local paper, reporting on Ned’s death, referred to me as his widow a few days after his death (a bicycle accident), I actually phoned the editor.

But I wasn’t. (The editor, a casual friend in that small town, was kind; “Yeah, I hesitated over that word,” he said sympathetically, not mentioning that he was right. Not mentioning that he saw what I didn’t, yet: I was stunned with grief and shock, not rational.)
As we endure grief in the first days, weeks, months, even years for some of us, following the death, we cling to the idea of way-stations , even without knowing we’re doing so. I think this is part of shock, something our unconscious does to break the reality to us in a way that is slightly more bearable (or perhaps to break us to the reality).
We think, for instance, that getting through the funeral or memorial will be the hard part. But, we imagine, that after it there will be some sort of resolution or closure.  A moving on, a healing. (Joan Didion writes about this excruciatingly well in The Year of Magical Thinking).

This is what I assumed, without knowing that I even had such an assumption.

how to be a widow, or not

After all: I didn’t know how to be a widow (no one does).

The book was to be of Ned’s collected drawings and writing, along with a few things we wrote together, and a few I wrote about him. My friend Corrinnia Briggs, a graphic designer as brilliant as she is compassionate, threw herself into this with me. She too, like the editor, was kind enough not to mention I was out of my mind at the time.

As for the actual memorial, all my innkeeping, party-planning, writing chops went into overdrive. Friends did various pieces of it, and they, too, refrained from saying, “Have you lost your mind?” Perhaps they didn’t need to; perhaps it was understood. By everyone, except, perhaps, me.

I say “perhaps” because I sort of knew, though I didn’t know fully (not knowing was part of the seeming craziness). For the first and only time in my life I ran out of gas while driving. Of course sleeping more or less vanished. Because I wasn’t hungry, I lost twenty or thirty pounds in a few months, without thinking about or even noticing it. And then there were the fits, the storms, of grief, an emotion shockingly pure and unlike any I had ever experienced. There was no standing outside it to observe such a fit, which is what I mean by pure. The overwhelm of such a fit, when it would rise up, was complete. And then it would pass, until the next one.

So of course I knew I wasn’t normal.

Yet I remained high-function. Sort of.

The book, called With and Without Ned, turned out beautifully. So, in so far as such an occasion can, did the memorial.
Yet I still remember, when I returned to the little house I had shared with Ned, the house that was now so shockingly still night after night, remained so after the memorial.
I had done everything right. **** But he was still dead. ****
This is the wall that widows run into, over and over and over, especially if it was a good marriage.

I have been thinking about these ideas, the way-stations we carry without realizing that we are. Like that the funeral will tidily bring healing and recovery, “closure”, act as the clarion call to us moving on.

In part I have been thinking about this because a recently widowed friend told me about another such wall.

I happened to be at a shopping plaza in Nashville when she reached me on the cell. So, I walked back in forth in front of a an AutoZone and a post office, phone pressed to my ear as she wept, because, of course regular old normal life does not stop for the outrage of a spouse’s death and the grieving of that death, and god, did I understand that.

“It’s a year and three months!” she cried, her voice rising. “I thought, okay,  you will get through a year, you will go through all the anniversaries, all the markers, all the occasions, and then it will be easier. But Crescent, it’s not easier! It’s harder!”

Every grief and widowhood is as individual as the vanished marriage or long term relationship which preceded it. Yet this we had in common. I was able to say to her, with absolute truth, “Yes. The hardest period for me was between a year and a half and two and a half years.”

Because, what can we — especially those of us further along on the journey of widowhood, do but bear witness, to those more recently forced into the club?

My friend, too, was struggling with knowing and not knowing her state of mind. The lack of sleep. “I keep forgetting things. I can’t make decisions. It’s crazy, crazy.”