The Year It Rained 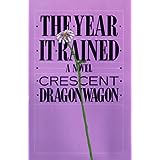 Elizabeth Stein, seventeen, is an uneasy survivor. Back from a year of madness, she finds that everyone she knows is falling apart and the questions she asks seem to have no answers. But the past–including the year it rained–must be untangled.

Her father, a well-known Hollywood biographer, is sliding toward alcoholism. Her mother, the one “everyone wants,” is trapped by a lifetime of self-denial. Then, there are Elizabeth’s two boyfriends: Hal, the older history teacher, and Jonathan, her own age, whose electrifying lovemaking excites and terrifies her. Her lost friend, Tabby, can’t help her now; neither can the stream of therapists, psychiatrists, and psychologists whose terrible mistakes and superficial solutions only makethings worse. Thoughtful, keenly self-observant, feisty, and self-mocking, she’s determined not to be a victim.

In powerfully moving prose that will inevitably be compared to The Bell Jar and I Never Promised You a Rose Garden, Crescent Dragonwagon has written a rich and sensual novel about one young woman’s awakening as an adult and as an artist. Elizabeth’s story is about loss and recovery, fear and hope, and the courage to pursue self-understanding.

From Natalie Babbitt’s review in The New York Times:
“Miss Dragonwagon’s writing is strong, adult, holds nothing back. Her book is shapely and satisfying and, though she may not have intended it, deeply touching. It has the authenticity of first-hand observation, and may be to some extent autobiographical. But all novels are to a degree autobiographical. Finally, when a novel is as fine as this one, that element and all the temptation to speculation which it invites, simply cease to have any importance. ‘The Year It Rained’ is a beautiful and significant book about love; read it and pass it along.” 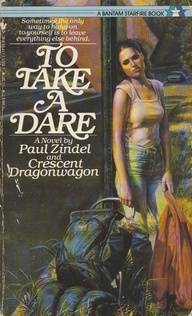 To Take A Dare

A teenage runaway encounters both love and loneliness when she decides to settle in a small Arkansas town.