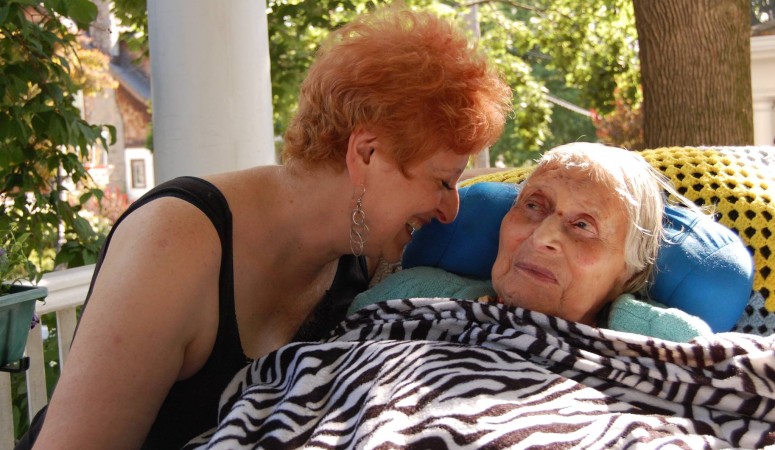 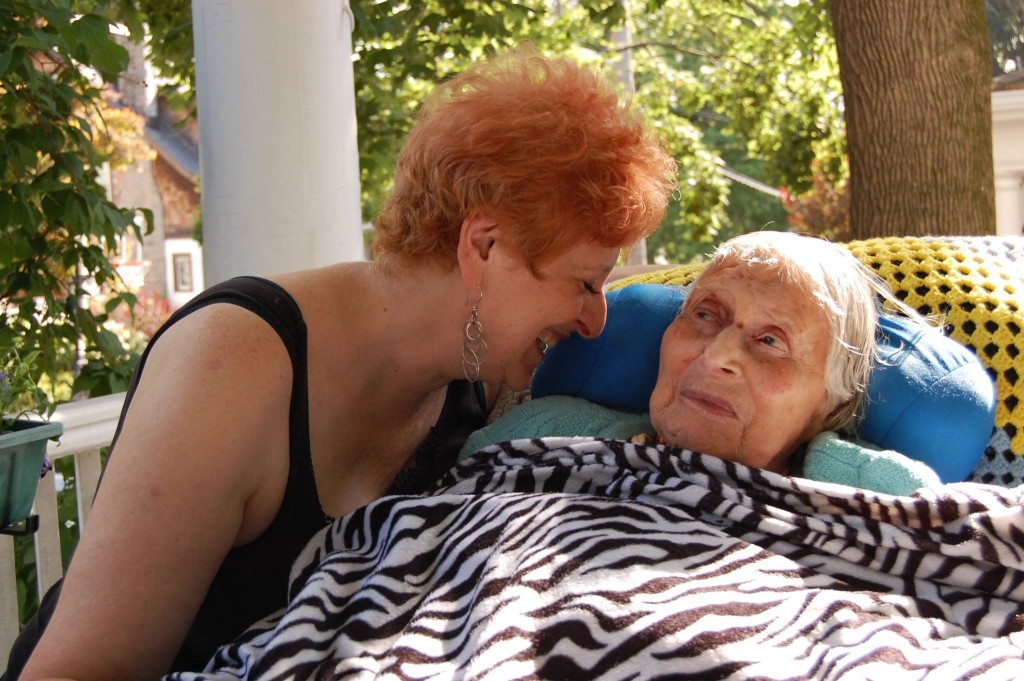 The words I will try to find for it can only inadequately express the experience.

I was at a yoga class which I take once a week, on Tuesday night, called restorative yoga.

This is the one fitness class of any kind, anywhere, that I’ve ever taken, where at some level I didn’t have to talk myself into it. It’s just simply delicious. There is maybe 20-30 minutes of medium level somewhat vigorous poses, and then, as promised, it is restorative. Deeply relaxing, not quite sleep, but very relaxed and “altered”, otherworldly, the closest thing being that moment when you are not quite but almost asleep.

These restorative poses, most of which are supported with bolsters or folded blankets or other “props” as they say, are held for a good five or 10 minutes each, but it is an absolutely effortless, delicious holding.

In one of those poses, between awake and asleep, I suddenly saw a pair of eyes. It took me a moment to get it –her eyes, my mother’s, and a certain expression she used to have sometimes… Part almost flirtatious, part teasing, completely at ease. And you knew, if you were the recipient of her days when she was wearing this expression, that she adored and trusted you and was also amused and delighted by you.

The picture on the banner of this page, in it you see a bit of it in her late-life eyes only. And I put a picture below which, though her eyes are closed in that one, has some of the teasing joking jive-y quality.

I think the reason it took me a second to recognize that what I was seeing were her eyes (if they were) is that those eyes were neither the green of her youth, or the dark of her old age (post-glaucoma medication). They were a sort of yellow brown, as if the two shades were combined, and faceted, multi-shaded, dimensional, like some eye colors are, liker cat’s eyes often are.

With this recognition, I was pulled from the out-of-body-ish sort of floating state that one is usually experiences in these poses, to be being suddenly and almost overwhelmingly wrapped in her.

What came to mind immediately was one night when, late, we had had some kind of sweet interaction, talking and laughing, and as I finally left the room to go upstairs to bed, I thought, “No one will ever love me as much as this,” and felt an indescribably deep pang at this knowledge.

I was back instantly in this state – not memory, but a presence that was razor-sharp with both love and grief.

The mystery! That is one piece I couldn’t and still cannot get over. For, were this not strange, moving and strong enough in and of itself, today happens to be what would’ve been my late husband’s and my 37th anniversary.

The “sightings” or felt presence of and *as* another, a disrtinct other ( as opposed to the kind of presence that is memory) of someone I loved who has died, have been very rare in my life Twice with Ned, once with David, in both cases fairly close to the time of their actual deaths… But has never happened or never had, with my father or Charlotte.

One of those times with Ned, the first time, only a day or two after he died, that presence was just his eyes, as with Charlotte tonight. I don’t mean anything spooky, like just a pair of disembodied eyes, but that the eyes of that loved one were so present in vivid, so THEM, one couldn’t see anything else for their presence.

How strange it is that Charlotte should (if in fact she did, which is certainly what it feels like) come to me tonight, on what one would think would be a day that if anyone was called up it would’ve been Ned… But, and, called up in that same way – just those distinct beloved expressive eyes.

And, nearly 2 years after her death, not immediately or close to it.

I can’t get over this. Have been teary on and off since it happened, and, as you can tell still turning it over and over in the lapidary of my mind and heart, even as I make dinner, finish the day’s tasks.

Once again, big big life and big big mystery shows me how tiny I am, how little I or anyone really can know. Am struck with , humbled by, wonder. And wondering.

iI’s very quiet here. The kitchen is steamy, water boiling for pasta. Things do and don’t go on. Time, life, death, are and aren’t. The veils and curtains are very thin, but usually opaque.

And then there are those other moments when you can almost, almost see through them.