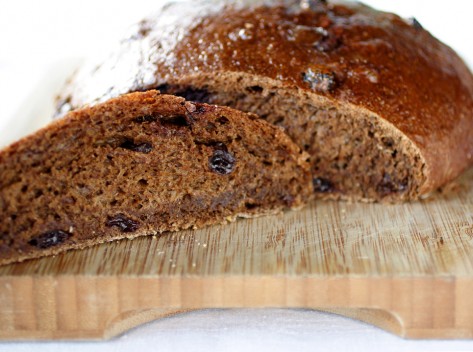 I am in the waiting room of the Springfield, Vermont office of Dr. Richard Lane, absent-mindedly, slightly anxiously, working on a jigsaw puzzle (blue Victorian house, hanging flower baskets, edges almost complete). This is my first visit. I was referred by my regular eye doctor, because I needed minor outpatient surgery.

I know it’s minor but jeez, it’s my eye, plus there is a shot involved. Hence I am dispelling minor unease by doing this jigsaw puzzle, thoughtfully set up in the office waiting room, as my boyfriend patiently reads People. Not characteristic activities for either of us.

In pops a cheerful woman in a pink blouse. “Crescent?” I look up.   “Hi, I’m Cindy, the office manager… I just wanted to say hi, and welcome you. And I just want to let you know, you’ve got some real fans here. One of us even has one of your cookbooks!”

I could not be more surprised. What a wholly unexpected, out-of-the-blue, and flattering, diversion! I say, “Oh! Thank you!” I choose to interpret this as auspicious, though I’m still a bit torqued about the shot.

Eventually I am ushered to the room where “the procedure” will take place. My eye pressure is taken by another nurse, Angelina, and I wait, until in bustles the doc, also cheerful as can be, middle aged, in glasses, friendly, solidly built, white jacket over blue shirt.

“I’ve got to tell you, ” he says, “When I was looking over the patient list for today and saw your name, I almost flipped out! I thought, there can’t be more than one Crescent Dragonwagon in America! Love your Dairy Hollow House Cookbook, the soup and bread one — I cook out of it all the time!” 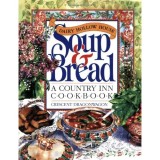 I’m in the examination chair, an unusual place to have this kind of discussion.

“Um, what are your favorite things to make out of it?” I ask.

“Well, I’m the bread-baker in the house and I make your Raisin-Pumpernickel Bread with a Secret a lot. A lot! It’s so good! I’ve made it at least six times, probably more. And when I bring it somewhere everyone always raves about it… And the raspberry butter that goes with it, that is just perfect!… “

And I do.  I learned it from fellow innkeepers, George and Katie Hoy, who used to, maybe still do, own an inn in Sagamore Falls, Ohio. The Inn at Brandywine Falls. Delightful couple. Gee, I haven’t thought of them in years. They must be pretty old now. I wonder how they’re doing. If they’re alive.  If they still have the inn.

And my goodness it’s been a long time since I’ve made that fine bread of theirs.

“In fact I brought my copy in,” says Rich, a little shyly. “Could I impose on you to sign it? ”

Impose? “I’m happy to!” I say. And this is very true, as almost all authors will attest.
“But should we take care of the other…” says Rich, “First?”

“Well, I think I’d rather do it before.”
“Okay, great…” He begins gathering instruments from a cupboard. “But, listen, ” he says, “I thought you were in Arkansas, running an inn.”
I give the three or four sentence explanation of how I got from there to here.
Which, of course, means including Ned’s death. 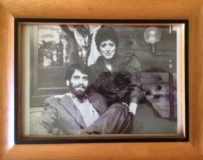 Portrait of the Innkeepers as a Very Young Man & Woman, circa maybe 1984

Since those readers who I am unacquainted with personally only know Ned alive and well as he was and is in my earlier books, this is news to them.  It’s a shock to hear, as I’ve seen more than once: the flash of surprised pain visible.

Ned was almost as much a part of some of my books as he was to my life then, and I suppose thus to readers’ lives too, in a small way. They, readers of those books, would have a picture of these two people who loved each other, and cooked well and ate well together: an accurate picture at the time I wrote it, but now vanished.

And since I loved Ned so dearly and we had such a good time, I guess that comes across too.

“I’m so sorry, ” says Rich Lane. “Gee… that was so sudden. That must have been so hard for you. No preparation.” He shakes his head. We circle that a little.

He says, “I believe you’ll be reunited.”

I say, “Well, I don’t really believe that. I don’t not believe, but I don’t believe.”

I say, “I guess so.” I say, “And, like, what if you’re widowed young, and you get with someone else? How would being reunited work then?”

“I don’t know,” Rich says thoughtfully. “It’s a good question. Maybe the Hindus have it right.” (Meaning, I guess, reincarnation?) “I’m science-based, but there’s a lot we don’t know. I guess we’ll just have to leave it to the good Lord to figure out.”

I’m not particularly eager to deal with my eye. On the other hand, the sooner it’s done, the sooner I can stop dreading the shot.

In comes Carolyn Lane, Rich’s wife (we’re instantly on first-name basis too), with the book.
“He said, ‘You’ll never believe who’s coming in tomorrow!’ … I was so excited when he told me last night! We love this book! Now I warn you, this is a well-used copy —”

And this is also true. I love the little spots and dustings of flour and occasional pages stuck together with egg yolk…it says my recipes were used. Loved. In some way had meaning in someone’s life.  Even when a book is long out of print, as this one is, its reach continues.

“But what are you doing here? ” says Carolyn. “I thought you were in Arkansas, running an inn.”
The explanation. The sad, sobering moment of this being taken in. The recovery, adjustment.
I sign their book. Carolyn went and got my boyfriend in from the waiting room to take a picture of the three of us, which he did. More pleasantries.

Carolyn leaves. Boyfriend returns to waiting room. Rich explains the procedure. I get the dreaded shot which indeed hurts like hell. I get my eyelid flipped inside out, and a plugged oil duct lanced and scraped out, which is unpleasant but only slightly painful. Drops are dropped in my eye.
Then we are back to talking food, bread, cookbooks, Springfield, Vermont, how Rich Lane got there, South vs. North (he lived in South Carolina for a while; Carolyn is from Nova Scotia.) Just a little about hot compresses and when I will be able to swim and wear contacts again (sooner than I would have thought).
And then I am on my way, my boyfriend driving us home. I grow cranky: post-medical,  anesthetic wearing off, I’m hurting a little, it’s hot. But he is patient with me. He makes an executive decision: we’ll eat out rather than me cooking.
And on reflection, how cranky can I be, really? That book was written more than 20 years ago, in Arkansas! It’s still giving pleasure and good eating to people I don’t even know, including (today) an ophthalmic surgeon and his wife, here in Vermont, in my present life!
There is so much sad and troubling in the world. My heart breaks over Nice, poor beautiful Nice, which gave me so much by way of healing and recovery for an enchanted week in 2014.
Yet and yet — I get to do work which does no harm, in fact the contrary, and occasionally, serendipitously I find out the place of that work in other peoples’ lives.
What can we do but feed each other, heal each other, be kind? I know this is naive, wildly optimistic, not even true. There are actually many other choices, much less benign. Some people, many, too many people make such choices, often brutal, crazy, cruel, irrational, incomprehensible.
But I’ll always come down on the side of love-and-be-loved.
And when it’s called for, I’m happy to bring the raisin-pumpernickel bread (which turns out to have a secret far beyond the chocolate chips, as I learned today). Not only that, I’ll bring the raspberry butter, too.
While it could be part of  #DinnerWithDragonwagon, the deeper truth, the not-so-secret secret to the bread and everything else, is: this life, its table loaded, groaning, contradictory, funny, tragic, offers a deep feast. Love/hate. Love/loss. Absence/Presence.I’ll choose, whenever I can, Love, Love, Presence.

The photograph on the top of this post is courtesy of writer Holly Jennings. It appears on her post about this book, which is part of  her Dowdy Corners Cookbook Club, RIP.

And now I am going to call them, and wish them a very, very happy anniversary.