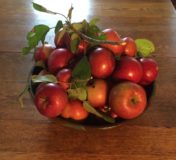 For the full story on these grand baked apples, which I learned from my mother, and variations, go here.

The size of apples you have on hand plus their variety, plus, whatever else you may have in the oven, all affect how long it will take for the apples to reach perfect doneness. But if you follow these basic outlines, you can’t go wrong

I am giving this method for four large or five small-to-medium apples, the minimum it’s really worth messing with, which will fit neatly in an 8X8 baking dish. You can certainly scale up and bake more, and I advise you to do so.

The glaze — a simple reduction of the apple cider or juice in which the apples baked — is not strictly necessary, but it’s awfully good.

EQUIPMENT: a baking dish of Pyrex, pottery, enamel, or one covered in heavy-duty non-stick coating, with sides are 2-3 inches deep; not much shallower or higher. Do not use an aluminum baking dish. What size? You need one that will hold your apples comfortably, so they don’t squish into each other but have a bit of space around them. For the quantity of apples described here, an 8X8 will do.

oil, for greasing the baking dish
4 large or 5 small-to-medium apples, ideally cooking apples (here), preferably organic, well-washed
whole cloves, allowing 3 cloves per apple (12 total for 4 apples)
2 or 3 sticks of cinnamon, ideally the splintery flavorful Saigon cinnamon, broken into 4 pieces (but the harder type will do, if that’s what you have on hand)
1/4 of a lemon, deseeded, peel and all, cut into four pieces
4 teaspoons butter or Miyoko’s Creamery Cultured Vegan Butter
4 rounded teaspoons of brown sugar, coconut sugar, or maple sugar
about 2/3 cup apple cider or other flavorful liquid (see below)
1 teaspoon pure vanilla extract

OPTIONAL
for making the glaze:
an additional 2 cups cider or juice (or other liquid; see below)

1. Preheat the oven, anywhere from 250 to 400 (depending on if you’re baking something else that is pickier about temperature at the same time). Oil the baking dish, and set it aside.

2. Core the apples, using a small, sharp paring knife. Start at the stem end, circling with the knife, working your way down in a cone-shape, scraping out the seeds and the tough seed fiber. Then flip and begin at the blossom end, repeating until you come to the middle. Then turn the knife around in the middle to scrape out any more seed-and-seed-case detritus and to make a nice, not-too-big tunnel right down the middle of the apple. Place each apple in the prepared baking dish.

3. Poke three cloves, pointed side down, equidistant from each other around the top of each apple, piercing the peel. Then jab in a stick of cinnamon into the top of the apple, leaving it standing upright (if you have the hard kind of cinnamon, just go head and stick the cinnamon in the hollow of each apple’s core). Push a piece of the lemon, with its rind, into the cored centers. Top  the lemon with the brown sugar or other sweetener, and finish with the teaspoon of butter or vegan butter.

4. Combine the cider and vanilla, and pour this over the apples. Stick the apple-filled baking dish in the oven.

5. Check on the apples at 20 minutes to baste them. Check again at 35 minutes, and if you like, spoon a little more of the apple cider over them. The apples won’t be done yet (maybe, if you are baking a firm cooking apple at a lower temperature, nowhere close to done). But from here on out, check them every 15 minutes or so, basting with the apple juice. There are many variables here — the size and variety of the apples, the temperature you chose. If you are an inexperienced cook and feel uneasy about lack of guidance, then go ahead and use medium large apples, bake at 350, and allow for 45 to 55 minutes.

6. Test the apples for doneness, inserting the tip of a knife if necessary — you want them completely, meltingly tender heat on the inside and almost collapsed in on themselves,  pleasantly shriveled on the outside. Serve, warm or chilled, with a little of the baking liquid spooned over each. Or, reserve the baking liquid to make the glaze, below.

7. GLAZE: transfer the baking liquid to a heavy-duty medium saute pan coated in non-stick covering, and add the additional cider or juice. Bring to a boil over medium high heat — it will bubble — and stay close at hand. You are trying to cook the juice down to a syrup about the consistency, when finished and cooled, of  thin honey. Keep lifting the pan off the heat every few minutes and giving it a swirl to bring down the bubbles so you can see how reduced it’s getting. Cook the syrup down til it is about the thickness of maple syrup (it will get thicker as it cools; better to remove it to early than to let it burn). Divide the glaze over each apple.

Variations on this recipe here.