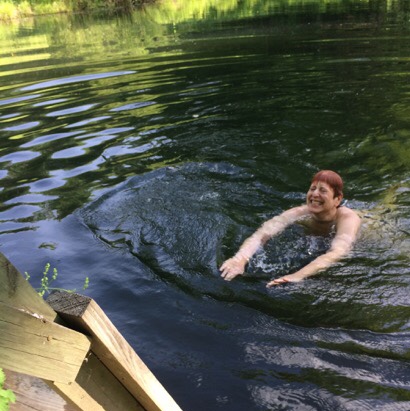 CAN ANYONE REPLACE HIM, OR HER? OF COURSE NOT.

DO I WANT TO DATE AGAIN? IF SO, WHEN? AND HOW? AND SEX…WILL I EVER HAVE SEX AGAIN? DO I WANT TO? SHOULD I WANT TO? AM I TOO OLD?

TERRIFYING QUESTIONS. THIS IS THE FIRST WIDOWHOOD WEDNESDAY POST TO EXPLORE THEM. IF YOU ARE YOUNG IN WIDOWHOOD, IT MAY NOT YET BE TIME FOR YOU TO CONSIDER THIS.

BUT IF YOU EVER ARE, THIS WILL BE HERE FOR YOU.

A VERSION OF THIS ARTICLE APPEARED IN AARP MAGAZINE IN SEPTEMBER, 2016, AS PART OF THEIR #DISRUPTAGING INITIATIVE.

I keep thinking I’m done having sex with other people. I keep being wrong.

I first knew I was done a week after I turned 48. This was twenty-three years into marriage with an adored husband. Two years earlier, we had traveled through a difficult, distanced, mostly asexual period. 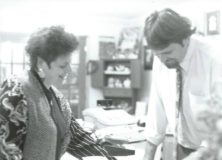 At the front desk of the inn and restaurant we owned for many years. We loved each other, and we also worked together.

But instead of divorcing, we’d reinvented. Clarified. Grown up more. By the time of my 48th birthday, everything between us glistened: vibrant, intensified, renewed. That week, the week of my birthday, we’d had sex three times, each time different emotionally and physically, each fulfilling in its own way. We couldn’t believe we’d come so close to losing the chance at this rediscovered, vibrant world, or which sex was, again, a gorgeous part.

I next saw him never.

That afternoon, on his thrice-weekly bicycle ride, he collided with a Chevvy pick-up. Bicycled into eternity.

Two months after Ned’s death, my therapist said, “You keep saying, ‘I’m never going to have another relationship.’ Is this something you actually believe?”

His photograph, hanging on the wall at home in Vermont. See it every time I go up and downstairs. This was taken in 2000, only a few months before his death.

Beloved, irreplaceable Ned. The only man I’d had sex with for decades. I was almost fifty. Unmarried friends chorused: “The good guys are married or gay.” Catcalls, hated when I was young, had stopped awhile back. Did this not indicate I was sexually invisible, past desirability?

I thought about it. I said to my therapist, “Yeah, I believe it.”

“Because Ned and I had 23 years of something most people don’t get for fifteen minutes! Who am I to expect that twice?”

My therapist shot back, “Who better? You co-created that for 23 years.”

“Well, they’re not all losers,” I thought to myself, that first night.

It was strangely calming; all those men, searching. It didn’t end, or even lessen, my grief. It certainly wasn’t that any of them could replace Ned. It wasn’t even, “He looks interesting.”

It was imagine; some other life, entirely different from the one you had, might be possible. It was, imagine, other people end up in a place they didn’t expect, too.

And that, being able to imagine in a theoretical sense, and to know I was not the only one, was just enough to get me by. To add just a bit of spaciousness and breathing room to the overwhelming loss with which I was living.

For the loss of Ned and our shared life had been intensified because it took place just after that phase when we had nearly lost what we had, and then gotten it back with such startling beauty and intensity..

And then this was had lost it permanently. And I would never get it back.

So believing I might have a different life, and that I was not alone in my extreme disorientation — that was calming.

Seriously? After standing in the ER next to Ned’s broken body, nurses still mopping up blood? Going out for coffee with someone is going to scare me?

And, “Won’t you be afraid to take off your clothes?”

Please. Go through something tough enough, you receive a get-out-of-jail-free card. The worst’s already happened. Taking off my clothes is going to scare me?

My first coffee, with a guy I met online, was pleasant, but chemistry-less. When we got up to go, he said, “Listen, I don’t know you well, but I’m guessing one day you’ll write about this.”

“Do me a favor, darling,” he said, “Remember me as the appetizer.”

Friends said, “It’d be irrational if you felt disloyal, but understandable.”

Here’s when I felt disloyal: the first time I hugged a man other than Ned. By the time we took our clothes off, I felt only pent-up, desperate desire.

Deep sexual desire for someone no longer resident on this earth: that was one experience no grief literature mentioned.

My sex life has been varied, mostly plentiful (yeah, I know, at my age? I couldn’t have been more surprised.) I can imagine the sex life for girls who work on websites similar to watchmygfxxx is also pretty varied.

I’ve learned about the care and feeding of the older lover, and his penis. Discovered g-spot orgasms, thanks to my first post-Ned boyfriend. Learned female ejaculation is no myth. (I had loyalty issues about that; how could I have this capacity Ned and I hadn’t experienced?)

But after awhile, I consciously worked not to let the grief I felt (and still feel) stop me. I wanted to allow desire back in, and, if possible, love or at least fondness. I felt that this, my hunger sexually and for companionship, far from being disloyal, actually was a compliment to Ned: being with him, including the difficult period we had worked through, had been so rich I still wanted relationship. Something similar to TubeV wives. They have some videos that remind me of the intimacy I once had.

Yet though I was filled with longing, I was not desperate. Having loved and been loved well also made me discriminating; I knew what good love was like. I was selective.

My therapist, it turned out, was right.

Being the age I was, I also worked to put aside self-consciousness. I learned to wear lingerie. And strangely, I wore it with a confidence I’d lacked in youth.

I relaxed, found I was appreciative of my aging, responsive, so-far-healthy body, with its belly, sags and wrinkles… none of which seemed to bother my lovers (most of whom resided in their own aging bodies, bodies I appreciated).

I was, after all, still here. I was alive.

Now, the hard part of my story. For some of this post-Ned time, my sex life wasn’t varied and plentiful.

For several initially happy years, I lived with someone who’d been in recovery from depression when we met; he had told me this, upfront. I believed him, but the David I met was vibrant with energy: I thought he was just telling me his story, and maybe he was. Perhaps he didn’t mean, no more than I perceived it as, a warning.

But it was. His devastating disease gradually returned, six years into our time together. David slowly became unable to love: sex, me, life. Sometimes, in our last years, I’d look down at my aching loins, and tell myself fiercely, “Get over it! You had great sex; that’s done! David needs your support! Put your energy there!”

He hadn’t been fully present for years.

See, sex when you’re older has so many layers. This is a hard, beautiful, terrible truth. Experience, history, mortality are in bed with you (perhaps even when that bed’s in a nursing home, which may be the next frontier for sexual freedom, dignity, pleasure and choice).

In later life, you know one of you will almost certainly die first. This intensifies every caress and climax.

Later-life sex is often described as companionable. Sure, and that is fine and comforting, and I do love that aspect of it, and it may be all you want, If you do, and you haven’t had it for awhile, I know you will feel lucky when and if you seek it, and find it, again.

But the larger truth is, having sex when you’re older is a death-defying act.

How? You have to want it enough to override the gravity-and-reality-defying insistence that ‘sexy’ equals ‘young,’ the skin-deep images. Your sexuality, if you wish to explore and own it, is deeper than how you look. It’s identity. It’s who you are: a creature of many dimensions, including sexual.

The man in my life these last four years is my age. He told me recently, “I love your lips.”

I said, “Oh, I wish you’d seen them when I was younger. My lower lip was so plump and full.”

He said, “My cock was longer. More girth. Heavier, harder.”

Yes, mortality wins. But until then, death, go f*** yourself.