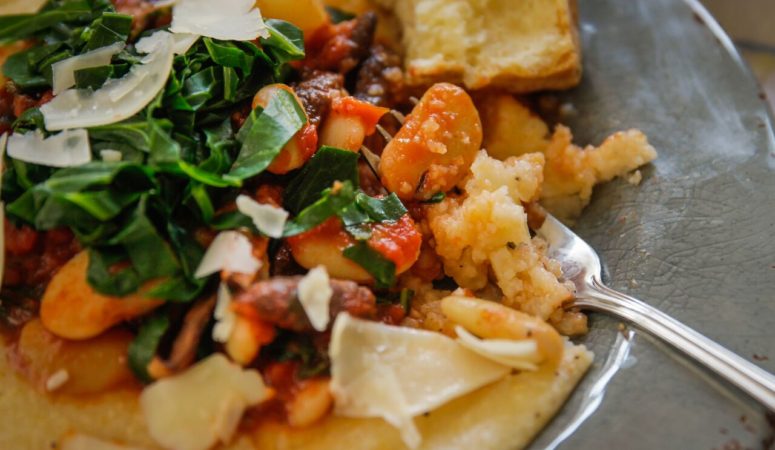 There’s no doubt of this: New Orleans is a city which knows its beans. 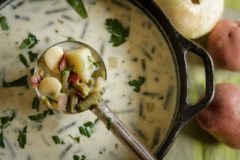 So when Camellia Beans, a well-respected and well-loved brand of dry beans based in that municipality approached me about using some of the lima bean recipes from my book Bean by Bean,  of course I gladly said yes.

They have just put up the post featuring  three of my recipes —  Brunswick Stew, Ruth’s Southern Country-Style Butter-Bean &  Green Bean Soup with Potatoes,  and (my favorite of those they selected) Ragout of Shiitake Mushrooms, Butter Beans, & Southern  Greens, which is served over a bed of cheese-enriched grits/polenta. And  I must say, they did a beautiful job. The photographs are just lush. And it makes me happy to think of many new eaters and readers discovering lima beans (also called butter beans) in these recipes.

It has all put me in mind of just how much I love beans, and for how long, and in how many ways.

BEANS, WHEN I WAS YOUNG & HUNGRY

How delighted I was  to fully begin discovering beans in my late teens, when I had struck out on my own, obstinate, independent, certain I wanted to be a freelance writer, and hungry in many senses of the word. Beans seemed to me every bit as magic as those that were  traded to Jack in return for the family cow.  Imagine! One little package could turn into a hearty meal for six or eight people!  And, if you see seasoned  boldly and with wisdom, a meal that was not only hearty but deliciously so! And,  as if that wasn’t enough, so very inexpensively! And healthfully, to boot!  This combination of factors,  plus the variety of ways beans could be prepared, and where, all over the world, astounded me. Then, I began to learn about how good legumes were for Earth itself. That capped it. I had to write about all this.

I wound up doing so in a little tiny spiral-bound book, called The Bean Book. It was published in 1972 (the first cookbook Workman Publishing brought out; they were later the publisher of such cookbook phenoms as The Silver Palate Cookbook). I was twenty. It cost $2.45.

But there were more bean-gifts still to come.

After a few years passed,  I became a vegetarian, for reasons of health, conscience, and environmentalism. With that,  all t that I had already long loved about beans became even more meaningful to me… for they were now a personal staple food. My long-time wonder at bean-nature began to be closer to awe.

As I grew older and, I hope, wiser, I learned more and more about beans and how to cook them. And, too, new varieties of beans began to come to market. Enter the farm-to-table movement, and heirloom vegetables, and the growth of farmer’s markets, and the explosion of interest in foods America’s newer residents brought from around the globe, and the passionate seed-saver culture.

Given all this, when Workman Publishing asked me if I consider doing an updated reissue of The Bean Book, I said yes. Of course, it was not a reissue, it was a completely new book. Because at fifty years of age, you can’t redo what you did at twenty, in writing as in everything else. You start over, from where you are now. It is less reissue than reinvent, reconsider, regenerate.

And I did. And that, after four years of work, was Bean by Bean.

Now, the perspicacious reader of my work will note that the first two recipes Camellia chose are not vegetarian, although, as I say, I am,  and have been for almost 40 years now. 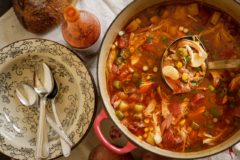 The first is Brunswick Stew. It’s a traditional favorite  in some regions of the South:,redolent with tomatoes and corn as well as those  plump luscious limas,  and, yes, chicken.  But it was part of my life  in my  non-vegetarian childhood — my mother, a Virginia native, made it  a couple of times a year for the family,  and we always loved it.  Because I am a  “laissez-‘fare'” vegetarian, it seemed to me that Brunswick Stew just belonged in Bean by Bean ( though there I also offer a vegetarian version). And I think it also belonged on Camellia’s page.

As for Ruth’s lovely soup stew,  Ruth was Ruth Eichor. She was an older woman,  tiny and bent over from scoliosis, but sharp as several packages of tacks.  She was a  loyal friend  to me, and  also a mentor, back in Eureka Springs, Arkansas. I lived  in that little tiny Ozark Mountain town for more than three decades,  and she was a native, able to  and eager to gently  and persistently school me in what she thought I should know:  not only about Eureka Springs,  but life in general.  However, but she was also flexible enough to bend and respectful of our differences.

Thus,  when she made this homey soup for me one chilly evening, she explained that  although she usually put bacon in it, she  had left it out that night on my account. ” And you know,” I remember her remarking,  as she spooned it up thoughtfully, “it’s still pretty good!”

The third recipe Camellia selected is one  I make still, and have since  the days of the country inn  I once owned  back in Eureka Springs, Dairy Hollow House.

It is vegetarian,  although not vegan.  And, although I don’t teach cooking classes very often,  this is one I have made several times when I have – including, memorably, a class I did for now forgotten charitable purposes over 30 years ago, but what I do remember is the site: under a tent, outside a farmhouse, on one of the islands in the Pacific Northwest.  As good as the Ragout of Shiitake Mushrooms,  Butter Beans, & Southern Greens is  inherently, I must say that in those circumstances it was downright sublime.

And so it is. After a while, recipes  and ingredients are not only themselves,  and not only nourishment and pleasure, but the repository of memory.  Each bite of something good,  especially if it is both sensually pleasing and healthful,  strengthens our stand in our present life. And when we are lucky, it also roots us in the past, in our own history  and the people we knew and loved and ate with back then —  even as we build future associative and joyful memories.