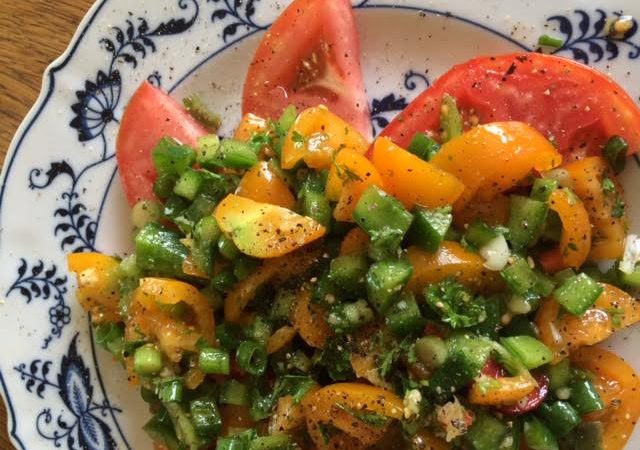 OH those first tomatoes; the kind, we eat out of hand (from our own garden, if we are lucky, a tomato eaten as one would a piece of fruit, parting that hairy aromatic foliage to find that first globe, still-sunwarmed).

These are the tomatoes we wait all year for; even after we tire of them plain, mostly of us still wouldn’t get too fancy with ’em…  would just cut up in big chunks in a bowl, maybe with a pressed clove of garlic, a lot of torn basil, a pinch of sea salt.

From this point, it’s true, some people doll them up: a splash of balsamic vinegar, say, and some good extra virgin olive oil,  or a little minced green chile for heat.

And there are devotees of the tomato sandwich — not just BLTs or it’s vegetarian kin, TLTs (tempeh, lettuce, and tomato), but even plain old super-lush thick sliced tomatoes and mayonnaise  on a nice eggy bread, like challah. I know people who can eat three such sandwiches at one sitting, and have to force themselves to stop. I like tomato sandwiches (especially TLTs), but am not a fanatic of this caliber.

So okay, fine. But personally, for much of summer’s first full flush I feel no need for tricking out tomatoes, any more than I feel a need to cook them.

THE CUSP BETWEEN SEASONS

But here it is mid-September, at the last breath of summer. At least it is where I am (Arkansas). And the farmer’s market is overflowing with tomatoes.

Now, even now I am not surfeit of tomatoes plain or plain-ish, especially some of the gorgeous heirlooms (the Brandywines, Cherokee Reds, Black Krims — even the names! ). So very lush and plush, each variety of distinct flavor and dense texture. Nothing can perfect them, since they are perfect.

Still and still. There are so many, and winter is coming. Some of us may be canning tomatoes, plain or turned into tomato sauces; some of us freeze these sauces.

(I usually do a couple of batches of sauce from lovely sweet yellow tomatoes, such as Sunny Goliaths or Pineapples; these are low-acid varieties and can be enjoyed by those for home acidity is an issue. Such sauces, however, must be frozen or pressure-canned, rather than sealed in a hot-water bath, because acidity is a botulism preventer. When I make this,I much prefer the texture and flavor when the sauce has been frozen; pressuring just takes away some of the pizazz). 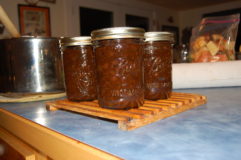 The last batch of green tomato mincemeatless I made in my Vermont kitchen.

You can bread ’em and fry them fresh, of course, and you’ll be happy you did.

And there are also many fans of fermented green tomato pickles.

But as for me, I almost always make a batch of green tomato mincemeat(less), and come Thanksgiving, am inevitably pleased I did. (The recipe for that is in Passionate Vegetarian).

But though the heirlooms deservedly get most of the fanfare, there are the mighty fine but not intoxicatingly transcendent summer tomatoes.The usually less expensive ones one of my favorite farmstands calls “field tomatoes.” By this time of year, one can definitely be ready to doll them up for a delicious last hurrah.

Wondering about the difference, in both flavor and price, between heirlooms and field tomatoes?

Heirlooms plants are generally far less prolific, each plant bearing fewer tomatoes; often just 2 or 3 per plant. Field tomatoes, on the other hand, grown from more modern seed varieties, have been bred for big yield — that yield comes first, before flavor and texture. If you have two tomato plants, and one yields 3 gorgeously flavorful tomatoes of one variety, and another yields 15 or 20 that are quite good but not over-the-top, well, the latter is just going to be cheaper than the former.

So. Here’s what I do with field tomatoes or seconds, sometimes with an heirloom or two thrown in, sometimes with cherry tomatoes. I make banadora, my take on a tomato salad from Uzbekistan.

And mind you, it’s all still pretty simple and the tomatoes remain uncooked, seductive and raw. I make Banadora, using flavorings mixed-and-matched from Gil Marks’s wonderful book Olive Trees and Honey, a cookbook just about as seductive as a summer tomato.

More properly, it’s not Uzbek but Bukharan, a term which “refers to all the Jews of Uzbeki and Tajikistan,” Marks says.

Because his banadora contains optional cilantro, an herb I adore, and raw scallions, which always make me happy, and diced green pepper (also excellently crisp and sweet when local this time of year), when I first read the recipe I couldn’t wait to get into it. But… he also offered three variations: Israeli, Moroccan, and Indian, with green chiles instead of bell peppers.

I liked elements from all of them, and yet I knew the staggering amount of oil he called for would not be to my taste, nor the quantities of vinegar or lemon juice. I wanted the tomato-ness to come through clearly, loudly, the other elements merely backing them up in celebration. Too much oil so would not do this, I felt.

I knew this not because I’m such a smarty pants, but because I’ve been cooking a long time and have grown both highly culinarily literate and aware of my own tastes and prejudices, and, over time, have learned how to taste mentally before I actually make something.

I also knew I would like the tomatoes in different shapes… perhaps according to their colors.

And not bell pepper or chile: I wanted both.

And, with a box of fat oval bright yellow cherry tomatoes and a couple of excellent field tomatoes, and a thriving herb garden, my direction became clear.

I sliced the large field tomato, and lay it in slices on a plate.

I coarsely chopped about half the yellow cherry tomatoes, and mixed them with about:

I tossed all this together and then piled it on top of the sliced red tomato.

And then I got out my pepper-mill and ground a whole bunch of coarse black pepper over the whole thing.

The first year I did this at breakfast, thinking I would have it as part of lunch.

But then I tasted it. And ate half immediately.

This is my fourth banadora-making year. I’ve branched out, using all big tomatoes cut up rather than cherry tomatoes, and throwing in some of the darker ones…

Really, it’s hard to go wrong with this.

I have enjoyed it with slices of dense wholegrain toast, which is first smeared with feta, ricotta or hummus. And it’s excellent, too, over chilled not-grain-but-taste-grain-like seeds I have been craving lately: over a chilled combo of cooked millet and quinoa, with chickpeas tossed in, it’s a meal. But what a good addition it as one of many vegetable dishes, to make a quietly vegan Mediterranean type meal.

Best eaten on the screen porch, with those you love. Quick now, while it’s warm enough, and while you are still here, living and celebratory.