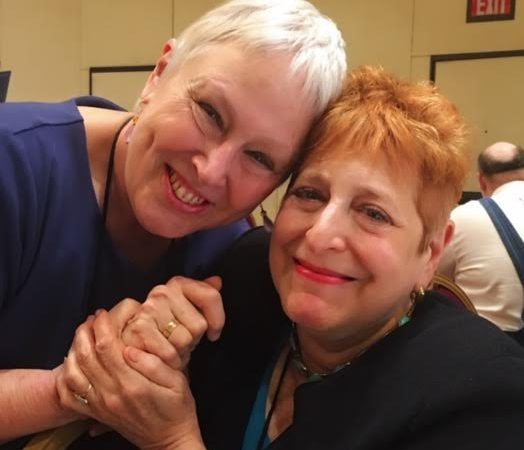 Last week, in Louisville,  Kentucky, I noticed a nice-looking — okay, cute — somewhat formally dressed man, seated alone across the aisle from me on the bus. He was youngish (I’m 64, so a shocking number of people now look youngish to me). He seemed a little jittery, not quite at ease.

This was the last night of the 39th Annual Conference of the International Association of Culinary Professionals (IACP). The bus was taking us from the conference hotel to the evening’s gala. There, awards for all manner of culinary communications achievement would be given out, in the classic “And the award for best (whatever) goes to — ” style.

Well. IACP people, and for that matter food people in general, are a talkative bunch, who know no strangers. And rarely is anyone without accompaniment on an IACP expedition. I leaned over and introduced myself.

“I’m up for an award!” he said. He seemed relieved to have connected with someone, though still a little wild-eyed. .  “I just got in this morning!” he repeated.  “I flew in from Miami, but I live in New York. And I — ”  He gestured around the bus, one of several ferrying members over, full of talkative, enthusiastic people.  “I just had no idea!”

“Wine, Beer, and Spirits,” he said. “It’s called How to Drink Like a Billionaire: Mastering Wine with Joie de Vivre. ” He paused.  “I probably won’t win. I’m up against some really good books.”

“Well,” I said, “Number one, you have a 1 in 3 chance of winning. And number two, yes, winning is cool, it’s a big deal and an honor and all, but you know, it means just about as much professionally to be able to say ‘Nominated for an IACP Award’ as ‘IACP-Award Winner.’ Really. It does.”

I nodded. I wasn’t just saying this to buck him up, I actually believe it. “There’s a lot of competition even to make the top three,” I said.

He said, “You sound like you know what you’re talking about.”

He leaned forward confessionally, looking around the bus humming with outgoing people, and said, for the third time,”I just got here this morning. I didn’t even know IACP existed until they called my publisher to say I’d been nominated.”

“That’s what happened to me,” I said, nodding. “Exactly!  I’d never heard of IACP either until I got nominated. Yeah, it’s a little disorienting, to walk into all this.”

“What were you nominated for?”

“Oh, it was years back. I’ve been nominated twice for IACP, but I didn’t win. I won a James Beard Award, though. Anyway, IACP’s great, I’ve been coming to Conference most years ever since.”

Mark Oldman asked me if I knew anything about how the judging for cookbook awards took place.  I told him I did, a little, because I had also judged for both awards, though my information might be out of date, because that too was awhile back. I told him how there are usually at least 20 or 30 books per categories, and how three judges (who don’t know each others’ identities) narrow it down to five, communicate with the organizations, and the organizations tally those and somehow get it down to three, and then each judge makes 3 to 5 recipes out of each of the top three books and then makes their final suggestion.

I told him that each time I had had a clear favorite going in, but that making the recipes had altered that. 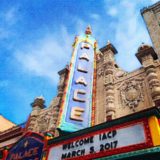 “But,” I said, “I don’t have any idea how it works on reference books, or with other categories that don’t have recipes, or even if they still do it that way.”

We continued to chitchatting as the bus rolled through downtown Louisville, at present all torn up due to construction of a new convention center. He asked me more about winning and losing, and about the James Beard Awards relative to the IACPs.

“Well, I’d be interested,” said Mark Goldman, perhaps with the misguided loyalty of someone who has just found a temporary friend and been spared social disorientation.

THAT WAS THEN, THIS IS NOW

I hadn’t thought about the article in years, but I vividly remembered the James Beard win.

I remembered it not only because I was convinced I was not going to win, but because it took place during an overall sucky time in my life.

It was two years after I had suddenly been widowed. (Here’s how suddenly: my adored husband — we’d been together 23 years — had gone out on his typical bicycle ride, been hit by a car, and died that night).

My mother, in her early 90’s and always difficult (until the last few years of her life, an ease which was on the way but which I could not yet know and which would have been impossible for me to imagine) was  “incarcerated” (her word) was in a rehab center, due to a twice-broken hip. She was furious, but could not be released until her home had been made accessible.  I was midway through retrofitting it, on a budget, all of which kept me from my own home, life, and work. I was living on emotional and financial fumes, and well aware that things were likely to get harder. Though I remained high-function and determined, I argued with despair every day, a lion-tamer holding up a chair to keep it at bay.

In the midst of that, I won the James Beard Award.

And now here it was 2017. And my life was, is, almost unrecognizably different, and so much better, in ways I could not then have imagined.

Mark and I continued talking,  all the way from the Louisville Marriott to the city’s glorious Palace Theater, where the awards were being held.

Where, I am happy to say, Mark’s book won that night.

I am also happy to say that another woman I met that evening, Kristina Gill, won. She was also there for the first time, for her first book,  and up for nominations in three (three!) categories. She was sitting in the same
row as me at the Palace, along with her parents and her charming uncle (who told me about a fish soup he made, and that he’d told his niece he planned to bark like a dog if she won).

Kristina lost out on two of the categories she was nominated in, but in the third,  International, her Tasting Rome: Fresh Flavors and Forgotten Recipes from an Ancient City, won.

Though I was wholly unfamiliar with their books, I cheered loudly for both Mark and Kristina.

It was their first time at IACP, or to be nominated! I liked them! I was rooting for them! I wanted them to win! And they did!

But happy though I was for the two of them, they were strangers to me until that night.

But one big 2017 winner was no stranger at all. She was a beloved friend.

I was ecstatic when Ronni Lundy won in the American category for her gorgeous, groundbreaking  Victuals: An Appalachian Journey, with Recipes.

Unlike the other two titles I cheered, I did know and admire Victuals. Was knocked out by its elegant, clean design and photographs, but less for themselves (though they were flawless) than because they perfectly framed Ronni’s stereotype-destroying depth and passion, her research, exploration, intellectual curiosity, questioning, her just plain good writing.

I have been admiring her quiet genius and humble, un-showoffy brilliance, her gentle self-revelation and fearless inquiry, for almost three decades.

Yet. I love Ronni even more than I love her deserving book and her crystalline writing.

Ronni and I manage to talk maybe once every four years, but it is somehow one conversation, always a continuation of that same unbroken conversation. And at hard moments in our respective lives, we have managed to be present to and for each other. The reasons I love Ronni, the reasons that she deserved this award (and a second one she received that night, the Trailblazer Award; for “… passion and impact in the food community …”) — well, those reasons would be several blog posts in themselves.

So all I’ll say here is that Ronni is a native of Corbin, Kentucky, who spent most of her growing-up years in Louisville (hence the dimensionality of her chops in writing Appalachia).

So how perfect, how right,  was it that, though in my view a ridiculously long time in coming, her win should happen to be right there?

I am lucky enough to count myself as a colleague among several categories of writers: those who write children’s books, novelists, poets, magazine article writers, bloggers, memoirists. I have friends in each category, and I belong to organizations that support each.

But it must be said that the easiest and most fun subset of all my writing collegial relationships are definitely with culinary writers.

I think the way-down-deep reason is this: food itself is inherently collegial.  No one eats alone.

Ronni Lundy and me, the afternoon before her big win

Every bite we eat, whether we recognize it or not, is relational.

Almost every professional I have met, in any skein of culinary life — whether a food writer, producer, grower, manufacturer, restaurateur, videographer, someone who works to alleviate hunger, save seeds, protect honeybees, or raise culinary literacy — is generous. Food connects us  — to the Earth, its seasons, terrains, infinite variability — and to each other. It — food itself, and cooking it, and eating it  — is inherently generous.

It makes those of us who work with it close-up more generous, too.

And that is at least partly why I leaned across the aisle and extended my hand to Mark Oldman and said, “I’m Crescent Dragonwagon.”

And why I did dig deep into the archives and find that story I mentioned to him, about winning the James Beard Award,after having lost the IACP award, in the middle of a personally hellish period, .

Which I have now, happily, outlived.

That article, revisited, next week.